Review: Total Flame Off The Rails

The Total Flame OTR (Off The Rails) is manufactured at Plasencia Cigars S.A. and are packaged in tubes that are easier to store in motorcycle saddle bags. This is one of the three cigars Total Flame launched at IPCPR 2014. 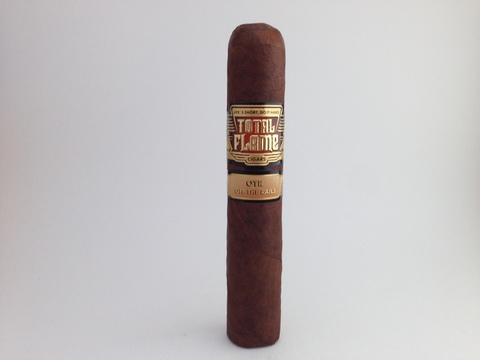 Pre-light draw is open and reveals cocoa.  The cigar looks great and is a refreshing size weighing in at 4.5 by 52.

The first third starts off with cedar, cocoa, and spice.  There is a slight saltiness aspect to the flavor profile.  This cigar is turning into a pleasant surprise as I was not expecting the flavors.

The second third brings a general woodiness accompanied by dark flavors.  The saltiness turns into a bitterness and the cigar is harder to keep lit.  I did just receive these samples so they may have needed more time to acclimate.

The final third starts with the woodiness and fades into an earthy profile.  The bitterness ramps up and the spice is overwhelming.  I let it go out half way into this third.

Overall, this was an interesting cigar.  I am anxious to see how it does with a few more months rest.  This cigar rates an 87 out of 100, meaning I would pick up a five pack.

Finally a review! I love the size (of the cigar and the review). The Plasencia's don't make bad cigars...I'm sure they just need a little rest. I'm sure its Plasencia grown tobacco and they grow some of the best, I would be curious to see a redux in 3-4 months on this cigar.

This is one of my favorites out of the new products, due to be released November 1st.  It's a solid medium body cigar, with lots of flavor and depth.  Definitely be on the lookout in stores!

Yeah, these definitely sound like some things that could smooth out after a few months of rest.  Initial flavors sounded pretty darn good.

In my life, I like this cigar with aged rum. Zacapa on the rocks pairs very well!