I received the Viaje Antidote by way of a bomb from Jordan, a good local BoTL. The Viaje Antidote was released to Viaje retailers and was packaged in a plastic jar meant to look like a prescription bottle. They were sold as 24 count jars.

“The 2014 Viaje Antidote has loads of flavor complexity and strength.” 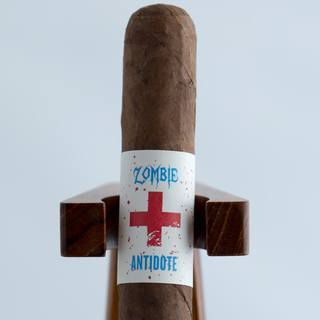 The nose on the Viaje Antidote is faint cedar, some pepper, light cocoa and coffee. A combination of flavors that has me eager to light up and start reviewing. Starting with a single v-cut the draw is fairly tight but I decide against making a second cut. My initial flavor impressions are sweet and creamy with the sweetness having a second level of complexity at the end of the draw, along with a bit of pepper. Retrohale has the same pepper more prominently, and some light honey sweetness.

As I continue to enjoy the cigar the pepper increases in intensity and the sweetness seems to match it at every level. The first third continues to evolve into a rich combination of cedar, pepper and the two level sweetness which all seem to be brilliantly balanced.

The pepper starts to fall off in intensity towards the middle third. A fair amount of strength setting in already by the middle third. The cedar two level sweetness with pepper finds each of the flavors rising and falling in strength as they compete.

The cedar continues to grow in strength and continues to overtake the other flavors by the end of the first third. The final third is largely comprised of the two level sweetness and the dry cedar that dominated the end of the middle third. The retrohale is still quite balanced and still lots of strength right up to the end.

The last few Viaje cigars I have received I’ve really enjoyed. The blends have really matched up to my palate thoroughly. The 2014 Viaje Antidote has loads of flavor complexity and strength. I can see the 2015 Antidotes being high on my list to review after the New Orleans IPCPR. Unless you want a fierce ride on the nicotine bull you’ll want to take your time smoking these.

This would be a great cigar with bourbon, or a bourbon cocktail. I could also see this pairing really well with a big merlot or even a tawny port.

Great review. I've got a couple of these somewhere in the coolidor. Sounds like it is time to light one up.

Paired one of these tonight with some Larceny bourbon -- fantastic pairing. The bourbon adds another layer of complexity to the sweetness of the cigar, a caramel or butterscotch type sweetness almost. Very good.