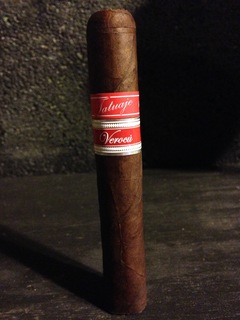 Pete Johnson's Havana VI is a blend that I have always struggled with. It has been described as being a softer version of the "Brown Label," and that the cigar is composed with less ligero in the blend. It was released in 2006, three years after the "Brown Label,"  and since its release I have come across guys who really love it and guys who don't care for it. I have never found a middle of the road with this cigar, but then again, I have found that with a lot of cigars. Well, with the release of the Havana VI, Pete released some limited version of the line that were title Verocu. These versions were considered to be Havana VIs on steroids, and till recently have not smoked one in a long time. Pete always does something cool with lines, whether it is making it stronger, changing the wrapper, etc., so when I got my Saints & Sinners kit, I decided to light up one of these Tatuaje Verocus inside.

Appearance and Aroma: The Verocu sports a very dark wrapper and in terms of coloring, I would say it is around the Colorado-Maduro side of the spectrum. In some ways, this is as dark as some Connecticut Broadleaf offerings. It features a lovely triple cap and a wrapper that is smooth, with some oils and very faint gritty qualities. There are few veins present with the cigar and the wrapper is giving off an aroma of barnyard, manure, coffee and tobacco. The foot has some similar aromas, and I am getting some more rich earth, manure and funky chocolate notes. Overall, it has a nice aroma that is very My Father/Tatuaje, and it is an aroma I was expecting. In terms of appearance, I am giving the smoke an eight out of ten, and the aroma is a nine out of ten for me.

Smoking Characteristics and Flavor: The Verocu begins by showing nice Nicaraguan flavors and I am getting some spices, earth, tobacco and coffee. It is very rich and filling, and while it is not overpowering, it is really enjoyable and announcing its presence in a good way. As I move further into the cigar though I begin to get some tart notes and it has this sour ale quality with some fruity notes. It is an enjoyable blend and with that change in the flavor profile, the strength increase. At no point is this cigar smoking at a full-full level, but it is between medium-full and full. The cigar ends by showing some nice spicy and peppery notes as well, and it has a nice bit of twang which is enjoyable. The construction remains solid throughout the cigar as well and it is producing an even burn line with a dark charcoal ash on the end. Towards the end of the cigar I begin to get some flaky qualities with the ash but it is nothing major or presenting a problem or being annoying. In terms of construction, the cigar gets 13 out of 15 points and I would say that the flavors are getting 27 out of 30.

Overall Impression: The Verocu is an entertaining cigar and I find it to be much better than the original Havana VI blend. I don't think its as good as the Brown Label, or other blends by Pete, but that is my personal preference. If I wasn't crazy about the flavor profile before, what makes you think that making it stronger is going to make me love it? I think with the extra strength the Verocu delivers more than the Havana VI could ever deliver, and because of that I get some additional flavors from the higher priming tobacco. I know a lot of guys who love this blend, I see why, and if they are looking for a stronger Pete offering, then they found that with this cigar. I believe it is a blend that will be better in smaller formats, ring gauge not length, and that is why I look forward to smoking the corona gorda. Either way, it was a fun release and a nice addition to this years Saints and Sinners kit. It gets 31 out of 35 points in my book. The two that I smoked had wind tunnel draws and pretty good flavor...not my favorite Tat.