Earlier in the year I had the opportunity to smoke a number of the Rose of Sharon release from Southern Draw Cigars. That initial release sold through, and a 2nd release was debuted at the IPCPR.

The Rose of Sharon was a release dedicated to Robert’s wife:

“Much like a Rose, Sharon exemplifies our brand with her beautiful ...

Check out our interview with Robert Holt at the IPCPR 2017 in Las Vegas:

Cigars Smoked for this Review: Three 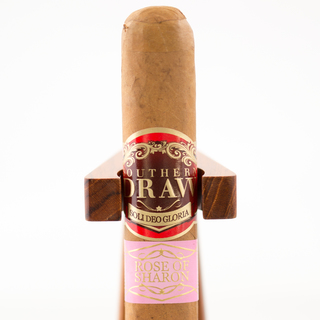 “The Rose of Sharon will have a broad appeal to cigar smokers with a flavor experience that evolves in complexity as you smoke.”

Using my v-cut I found the draw to be open with little resistance.

My initial impressions are a nice sweetness with some delayed spice on the post draw. The retrohale showcases the spice more and shows that the cigar has some body to it. Each draw produces a satisfying amount of smoke which results in less draws and I find myself having to draw less aggressively.

As the first third settles in I find the sweetness and spices balancing each other nicely, with some subdued dry wood notes. The spices linger nicely into the post draw, and I find them medium strength.

As the first third winds down, the spices fall to a medium minus with some of the lingering post draw spices and pepper falling in intensity. The sweetness here is complex and nuanced.

As the Rose of Sharon moves into the middle third, I’m starting to feel some strength hitting me. The sweetness and spices fall further in strength and become more nuanced. The post draw spices are replaced with some wood notes, I find them quite pleasant as there’s no drying mouthfeel associated with it.

Once the middle third settles in, there’s a significant profile evolution. I start to get some smoked meat barbeque along with spiced wood, and on the post draw the wood does have a drying mouthfeel. The retrohale has the spices stepping back up significantly to a medium plus level. The dry woodiness starts to take over the regular draw, with the barbeque flavors falling to the background. The retrohale has the spices falling back down to light levels with the barbeque intensified.

The last third shows the wood becoming a defined cedar flavor, and brings some hay with it. There’s a rich baking spice on the retrohale, with any pepper being pushed to a background note.

The Rose of Sharon will have a broad appeal to cigar smokers with a flavor experience that evolves in complexity as you smoke. The flavor profile is also nicely differentiated from the Quickdraw line so that it has a defined space in the Southern Draw lineup.