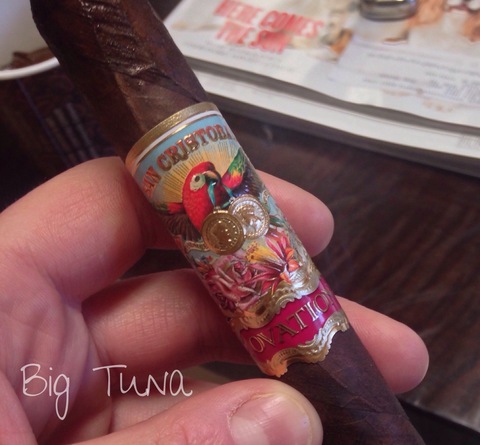 The cigar features a dark marbled wrapper and it spots some major veins and a nice bit of tooth throughout. I would classify the coloring as being a solid maduro overall, with some areas throughout which are darker and lighter. The cigar has an aroma of sweet tobacco, strong spices, hints of pepper, chocolate and rich earth, and that is present on the wrapper and on the foot. The cigar has a really nice beginning and it starts off by showing some nice black and red pepper notes. There are some cinnamon and sugar qualities present as well, and it has some whole wheat toast with that. There is a nice balance between the sweetness and the spice, and on the finish there is this dry cocoa powder flavor that really adds a lot to the flavors. It is not overly rich, it is more dryer in my opinion, and a lovely smoke. The body and strength are at a level between medium and medium-full, and it is a flavor focused smoke. The construction is top notch and it is delivering an easy draw, a solid burn line and a darker charcoal color ash on the end. 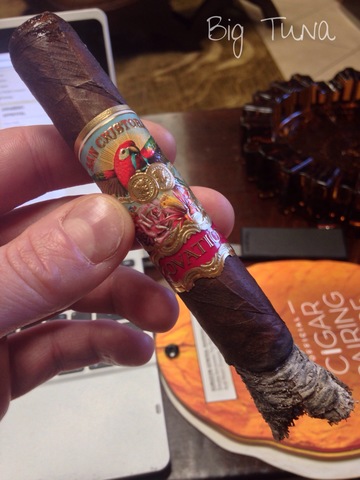 When I get into the second third of the cigar, I find that there is a change in the flavor profile being delivered. It is not as spicy or peppery in this third, but sweeter. It still has that sugar and cinnamon flavor profile, but the cocoa powder flavors are much more present. In some ways, it has become a little bit more rich and it is showing some chocolate cake with rich earth notes. The body and strength remain at that medium to medium-full level though and the construction is solid as well. The ash is splitting, but it is still holding on firmly to the end of a great burn line. The draw is smooth and there is a nice bit of smoke being produced with each draw.

I am in the final third now, and like the second third, it is showing a change. It is a little bit more similar to the second third, but it is quite different as well. It is delivering a solid earth and cocoa flavor profile. It is not overly sweet or showing rich chocolate flavors, but it is earthy while showing some tobacco and damp barnyard flavors. It has come down since the first and second third in terms of body and strength, and I would classify this third as being medium overall. The construction remains top notch in this third and it is delivering a cool draw with a nice even burn line on the finish. The ash on the end has that solid charcoal coloring and it is a soft and enjoyable finish. Ovation was a cigar that started off great, I really loved the flavor profile in the first third, but as it progressed it went downhill. The second third showed a flavor profile that was lacking when compared to the first third, and the final third delivered a flavor profile that was lacking when compared to the second third. Where those great flavors went, I don't know, but they truly left the cigar. I wouldn't say that the cigar is young and the tobacco needs time to come together, I would simply say that the blend was top heavy. Of course, this makes me ask if the blend was fully tested multiple times or if they just smoked the first third when blending. The construction was top notch though and it was a medium to medium-full cigar in terms of body and strength, so if looking for a cigar that is not overly powerful, that is another positive quality. Because of the diminish of flavors into the second and final third, it is hard for me to give this a praising rating though. That is why I am giving it an 85. There are many things that a cigar needs to do, one of them being that it needs to deliver from beginning to end, and this cigar does not do that. 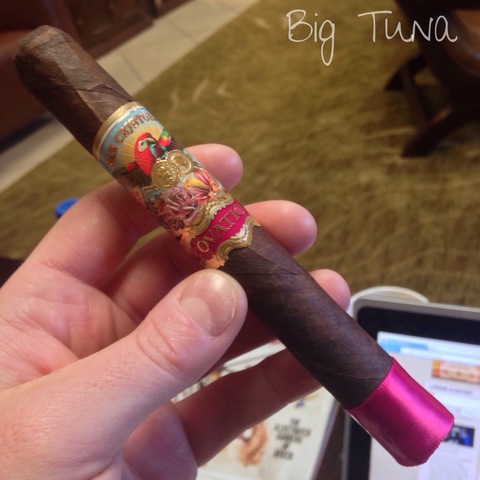 Nice review Seth!  The San Andres wrapper has me curious but I'm limiting new cigars this year and this won't make my shortlist

I've heard this from quite a few people now..."lacking"...