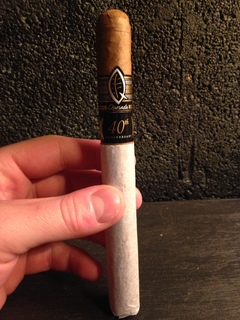 If there is a brand that I either love or hate depending on the specific cigar, it is Quesada. I find that they are a company that never produces a cigar that has me say "it was good," but rather I love this or I hate this. Because of that, I never give a lot of attention or find myself really holding on to the brand in the humidor. This year though they released the Quesada 40th and I was interested in trying it. I originally smoked the more available limited releases, finding that I hated them, but was then given some of the very limited Corona Clasicas which were part of the Quesada 40th, but blended by Manuel Quesada himself. I was interested how they would be in comparison, I had heard good things, but you never know until you try. Well, today I share those thoughts with a new audience and looking forward to feedback.

Appearance and Aroma: The Lonsdale Extra has a silky wrapper that has a nice light Natural coloring to it and it is showing some minor veins throughout. The coloring shows some changes throughout and it is not the prettiest of wrappers I have seen. There is a sight marbled coloring to it, but very slight overall. The cigar has an aroma that is showing some nice spice notes and it has some bits of hay, cedar, tobacco and fruit on the foot. The wrapper is showing some bits of spices, leather, cedar and tobacco, and it is a lovely aroma. In terms of appearance, I am giving this cigar nine out of ten points. As for aroma, the cigar gets nine out of ten points as well.

Smoking Characteristics and Flavor: Throughout the entire cigar the construction was absolutely perfect. It had a cool draw from beginning to end and there a nice bit of smoke present with that firm ash that was holding on well to the foot. It had a coloring that was a solid charcoal coloring, and it was great when next to the actual cigar. The flavors were amazing as well and it was a cigar that had complexity and transitioning throughout. I picked up a nice chocolate flavors throughout, and it had some spice, tobacco, wood and fruit notes with that. There were touches of hay and coffee preset as well, and this was a phenomenal cigar in terms of flavors. If you want a blend that is complex, has depth and transitioning, this is it. With smoking characteristics, the cigar gets 15 out of 15 points, it was absolutely perfect from beginning to end. Looking at the flavors of the cigar, the cigar gets 30 out of 30 points as well. This was a flavorful cigar that never disappointed me in any third.

Overall Impression: The Corona Clasica is an amazing cigar and is the blend that should have been used for all the 40th Anniversary releases. It is a complex blend that shows amazing bits of depth, complexity and transitioning, and it is a cigar that never loses any of its wonderful qualities. It continues to grow from third to third and never disappoint. The construction is simply fantastic from beginning to end and the draw is cool to the nub as well. The flavors were to my liking and it had the perfect balance and strength level along with that. These were limited and not as easy to get as the other 40th Anniversary releases, and that is a shame. I think if more smokers had this cigar the release would have been a bigger hit. This smoke gets 33 out of 35 points for overall impression. This is one of the best cigars that I have smoked in 2014 and one of the best, if not the best cigar that I have smoked by Quesada Cigars. This is without question a Cigar of the Year candidate.

I have one, stuffed down in my aging box... I suppose I should try and find a couple more...

Really need to track this one down.

These are great, I heard from a Quesada rep that this cigar uses a Ecuadorian Conn. Shade wrapper.....

Probably my favorite cigar coming from them, although I couldn't stand the blend with the Mexican wrapper.

I agree with you there Charlie, the Mexican offering was terrible. Coop is correct as well,  cigar of the year candidate.

Small Batch had them in 5 packs the last time I checked, your right Seth the Mexican version was terrible, has to be a totally different blend.