He was generous enough to give me a sample of quite a few Nomad cigars including the Connecticut Fuerte in several different vitolas. It was a great chance for me to catch up with Fred after the IPCPR and casually chat while enjoying some bourbon and cigars. 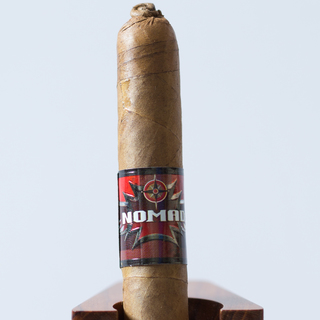 "At a time where Connecticut wrappers seem to get overshadowed, it’s great to see Nomad bring it with a top tier Connecticut release."

The nose on the Nomad Connecticut Fuerte lancero is comprised of barnyard, dry earth and I get a lot of sweet hay off the wrapper.

I used a Xikar v-cutter and the draw was perfect. The cold draw was very light and subtle, consisting of hay with just a hint of pepper on the lips.

The Connecticut Fuerte opens with pronounced grassy notes and a sweetness at the end of the draw. I’m also surprised at just how much smoke production there is off the Ecuadorian Connecticut wrapper.

It’s initially difficult for me to describe all the flavors in the first few draws except to summarize it as a complex beginning. The retrohale is this thick, even bodied medley of flavors, with almost a rich pipe tobacco component to it. As the first third settles in, the finish is short and clean with some slightly earthy notes that tend to coat the tongue. The sweetness builds as the first third progresses to about a medium level. I’m very impressed by the first third.

The last third finishes with more of the mossy earth combined with the baking spices.

At a time where Connecticut wrappers seem to get overshadowed, it’s great to see Nomad bring it with a top tier Connecticut release.Complex and savory at a medium strength level that makes it approaching for the majority of smokers.

I’ll be on the hunt for more of these in my travels.

As I was smoking the Connecticut Fuerte I couldn’t help but wish I had a coffee to pair with. Something medium bodied, bright fruit notes. I could also see this pairing really well with a Dr. Pepper. For beer I would reach for a Hefeweizen. For scotch I think you would have a few options ranging from the Talisker 10 at the smoky end or a Balvenie Doublewood at the sweeter end.

As Conny Whore#2 I hope I see these one day.

That is the first time I thought that band looked good on a cigar...I need to try these out.