The La Antiguedad is the latest release form My Father Cigars.  While I liked the name (and look) when I first saw this cigar, I had to go to Google to look up the meaning of La Antiguedad.  The translation I found said that La Antiguedad means: antiquity,age, seniority.  In my head I think of veteran leadership in the locker room.  Patrick Willis fills that role on the 49ers, Derek Jeter for the Yankees and so on.  This didn't impact my opinion of the cigar or change my expectation, but I dig the concept.  Enough of this nonsense... let's get to the review. Cigars for review were purchased by RobbyRas

Quick Note: For this review I used CigarFederation's rating system. You can view it in detail here. Pre-Light: The Habano Ecuador Rosado Oscuro wrapper on the La Antiguedad wasn't tough to look at.  The deep golden brown hue offered a nice backdrop to the red and gold color combo of the ornate La Antiguedad band.  The band had a similar look to that of the Flor de las Antillas.  In fact it looked like a painting (with a strong Spanish vibe) you'd find in your nearest art museum.

The wrapper offered up notes of graham cracker, cinnamon and cedar.  The odd part is that few of these flavors came in to play as I smoked the La Antiguedad.  As you will see in the coming paragraphs, the sweetness that I would associate with graham crackers and cinnamon was none nonexistent.

Beginning:  There was no "building of flavor" for the La Antiguedad.  From the first puff I was hit with big "chewy" flavors of coffee and black pepper.  This cigar would be another example of how the smoker can confuse flavor and strength.  The pepper notes were bold on the tongue and intense on the retrohale, but the strength was in the medium range.

As I progressed through the first inch I was met with a thick earthy note on the tongue along with a note of leather on the retro.  When I hit the one inch mark, the pepper on the retro receded (insert hairline joke here) and the leather took over.  This carried on into the middle portion. 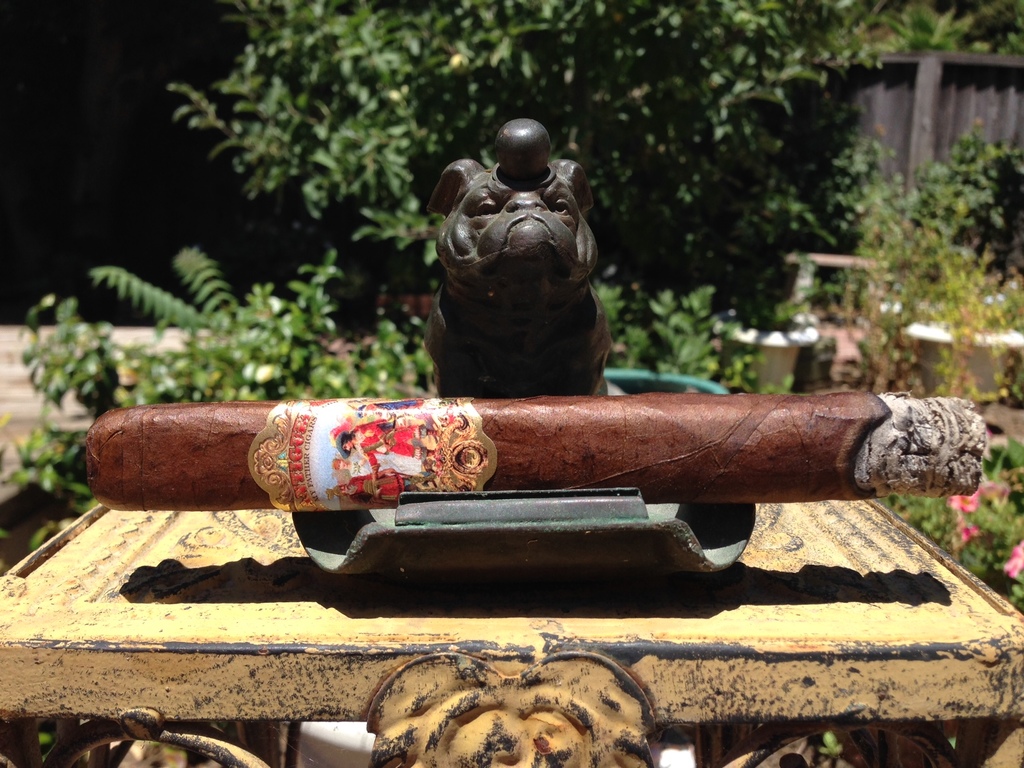 Middle:  This was, by far, the most enjoyable part of the smoking experience for me.  The pepper was dialed back to a secondary note while the coffee (which took on an espresso vibe), earth and leather combined to offer up a hearty flavor profile.  This lasted through the entire middle portion without much variation. 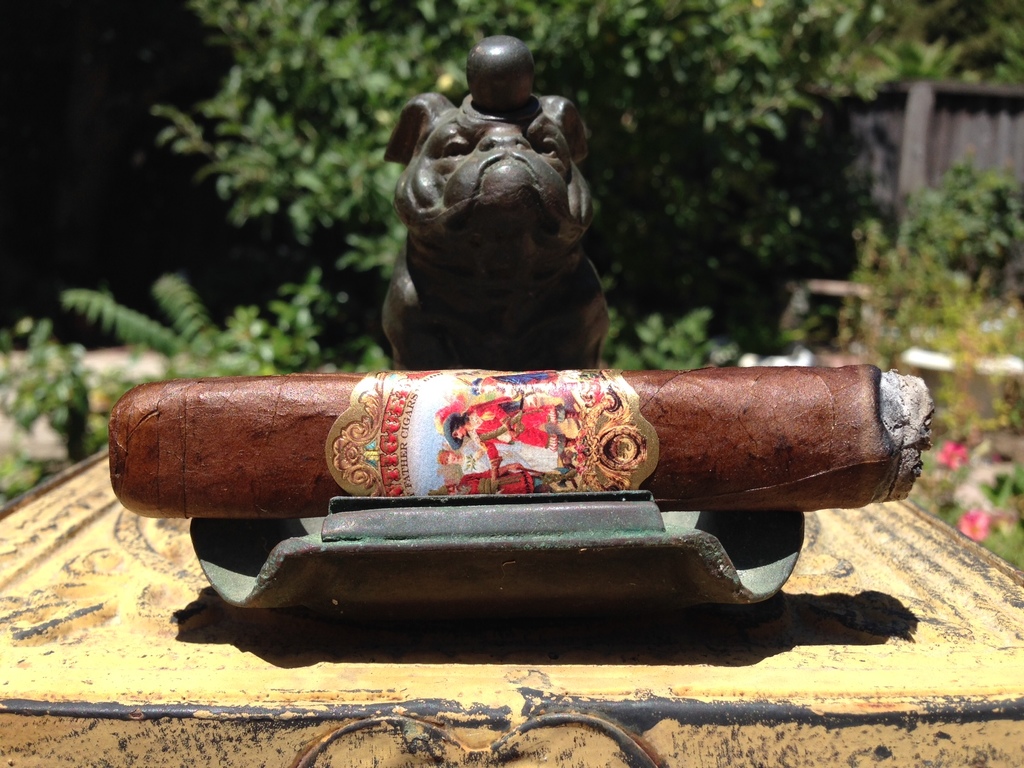 Final Thoughts: There were things I liked and things I didn't.  The middle portion of the La Antiguedad was enjoyable but it never had that "wow" moment.  The slightest hint of sweetness would have taking this cigar in a whole new direction, but I was left wanting.  The construction was great and the burn was precise,but I found myself bored with the flavors.  It was a typical My Father cigar and I was hoping for more.

I bought a 5-pack of the La Antiguedad for the purposes of this review, but I don't see myself buying another one.  I'm going to let the remaining sticks rest for a few months or so and see if that helps things.  I was disappointed by this cigar, but I think some rest will do them some good. 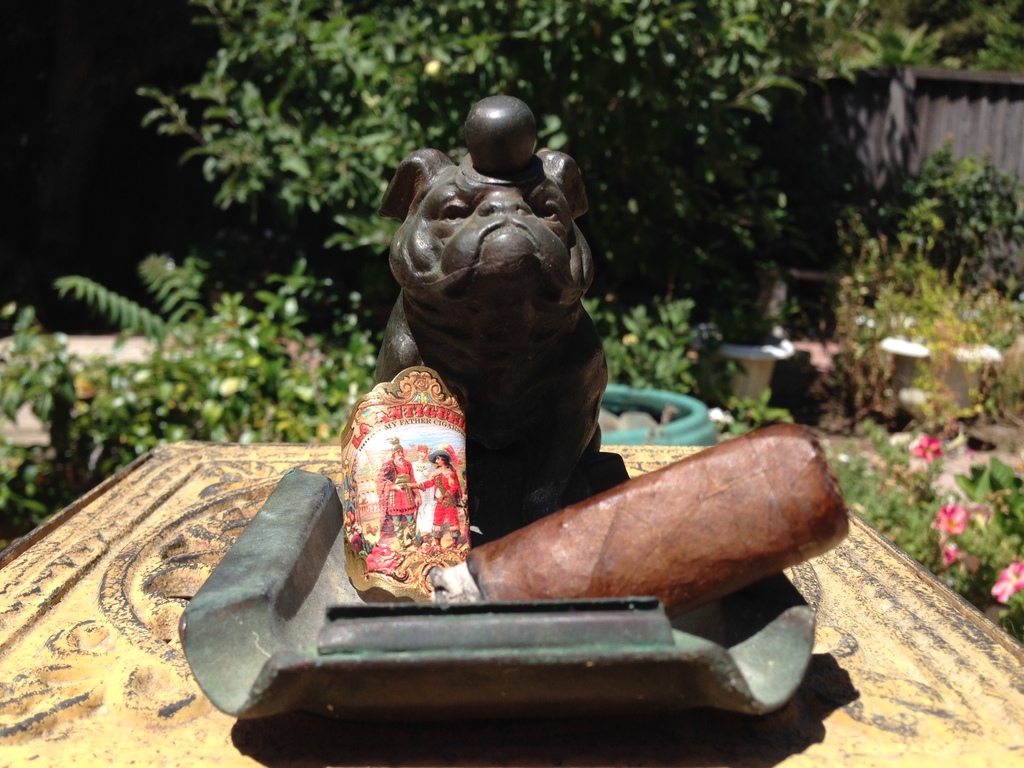 Good review. I have been hearing not so positive things about this stick and it's kind of disappointing. I like My Father and was hoping that the cigar they produced at a lower price point didn't taste like a cigar at a lower price point. But I guess you can have everything. As for receding hairline, screw hair it's overrated, shave it bald like me!

Yeah, this smoke just did't do much for me... I found myself searching for things to like about it and that I now how I like to do it...

In my opinion the best thing about My Father cigars is there construction, even then I will find huge stems (or even mid-ribs) hidden inside the filler. I personally won't buy My Father smokes to often, only when a new blend comes out will I spend money on them. I thought your review was about spot on with my experience with the La Antiguedad, only I gave it a 82 at best for decent construction.....terrible finish and final 1/3. Great review and pics like always, thanks Rob.

Mod Comment by Jason Meyers on July 10, 2014 at 2:01pm
My feeling on the La Antiguedad are right on with your review. I felt like the cigar had some potential, and perhaps some age will make them better. Overall I was not impressed and would reach for other sticks from the My Father line before this one.

Thanks for the review.  I only had a single example but was not impressed enough to want another one.  I thought it was close to full strength but not enough flavor to keep my attention.

I felt the same about the cigar.  Totally disappointed because usually My Father makes some fantastic blends.  And just so you know, I would have never inserted a hairline joke...

and  SOMEONE would have made a hairline joke...

Now that I've smoked one, I generally agree. The first 3rd was ok, not a bad stick. The mid 3rd was fantastic, but I agree a touch of sweetness on top of the cream/coffee would have been amazing. Then the final 3rd wasnt BAD, but got harsh (at least harsher than the rest of it)....I didn't nub it, and I always nub MF sticks.

I liked it, but not like I do normal MF sticks.