In 2014, La Aurora released a cigar called Untamed. The cigar was aimed to be a full-bodied/strength cigar that was finished with a Connecticut Broadleaf wrapper, and what made it very different from anything the company has ever done was the packaging. The packaging still revolves around the "La Aurora Lion," but it is a new lion that is more "ferocious" and a complete departure from what the company has one for over 100 years. Following the release of the Untamed, La Aurora released a new Untamed this year at IPCPR, Untamed Extreme. As the name implies, it is created to be a more extreme Untamed. ... I guess there are multiple levels being undomesticated. 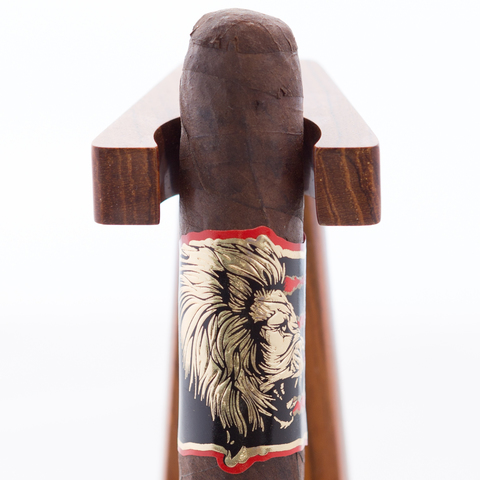 The foot has an aroma of cream, chocolate, rich earth and spices, while the wrapper is giving off a spicier and richer aroma. The cigar is rolled fairly well and it is showing some medium to small sized veins throughout. The cap is roughly applied, but it has a nice firmness throughout.

The first third opens up by delivering this nice creamy sweetness that is showing faint hints of cocoa and earth. Following that, there are some major spice and black pepper notes that really overpower the beginning. It has a nice soft sweetness to begin with, but as it progresses it becomes super spicy. There is a little bit of depth, but not much complexity overall. The construction is top notch however and it is showing an even burn line with that solid charcoal ash on the end. The draw is cool, giving off a nice bit of smoke, and the cigar itself is a solid medium. The body, strength and flavors are all medium, and it is underwhelming when you look at the band and say the name to yourself.

I am in the second third of the cigar now and I am finding that there is a slight bit of transitioning in this third. I am getting a lot more spice and pepper notes with the cigar and the creaminess has faded. There are still some earth and cocoa notes, very gritty, and it is showing that Broadleaf flavor profile with a little bit of kick with that. It is still not overly complex, but there has been some transitioning from the first third. I would say that it is smoking around a medium-full level in terms of body, but the body is a little bit softer with  a medium flavor profile. The construction is still top notch and the charcoal ash on the end is holding on well. The draw is cool and on he end is a razor sharp burn line.

When I get into the final third, I find that the cigar begins to deliver this bitterness with the spices and pepper flavors present. There are some gritty earth aspects present as well, but overall it is lacking a lot of flavors, and what is present is peppery and bitter. I put it down before the end, and this is a disappointing final third. The body, strength and body are smoking around a medium level, returning to the qualities of the first third, and it is disappointing. The construction though remains perfect and it is showing an even burn line that is razor sharp with a solid charcoal ash on the end. The draw is cool though and a nice bit of smoke is being produced.

The nose on the La Aurora Untamed Extreme is aged leather, spices, and molasses. On the foot I'm picking up cedar qualities. I used my v-cutter and found the draw a little on the tight side.

I get a light creamy sweetness on the first draw. There's cedar on the retrohale but it is also quite light and delicate with similar levels of spices. The spices on the retrohale pick up to a medium plus strength once the first third settles in. Towards the end of the first third the spices pull back to about a medium minus level. In the middle third the cedar dominates the flavor profile and has a bit of a drying quality to it. The molasses is still present but the cedar is running it over. A chocolate graham cracker on the retrohale appears out of nowhere but doesn't stick around for long. Some nuanced sweetness towards the end of the middle third. Cedar intensity drops which allows the molasses flavors to come through for a more balanced profile. Some peppery spices on the retro but down to a light plus strength level. 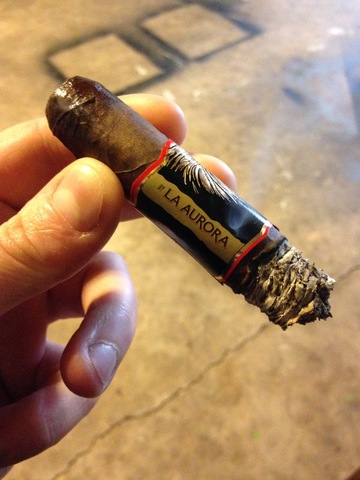 There is a big difference in opinion on this cigar. Surgeon has classified the La Aurora Untamed Extreme as a flavorful cigar with a flavor complexity that was a bit lighter than what he typically enjoys. That is what leans him towards a 5-pack purchase. Tuna looks at this cigar as having a core flavor profile that is somewhat lacking and not complex or showing really any transitioning. There is some strength to it, but nothing worthy of the name"untamed" or "extreme." It was medium plus at best for strength and body, which is not a problem, but as said earlier, it does not go with the title. The construction however was top notch throughout the smoking experiences and this is a well made cigar. Overall, this cigar gets an 85 rating.

Great review. Sounds like a Pass for me too.

While not overly exciting, they don't sound like they suck, so would maybe be worth picking up on sale, and I bet they show up on Cbid or Cigar Auctioneer eventually to snag some super cheap.

Comment by Sam C. on January 27, 2016 at 10:13pm
That would be right now, Generally Useful Jared. Was perusing Cbid and both are cheap at this moment. Still skipping them, though, after the CFed reviews.