This La Aurora Barrel Aged Robusto has been sitting in my humidor since November of 2012.    Sadly this is another stick that I failed to track the originating source of.

The nose on this smells of rich fermented tobacco with a hint of Spanish cedar.   I ended up spending several minutes taking in the aromas here before I finally toasted and lit up. 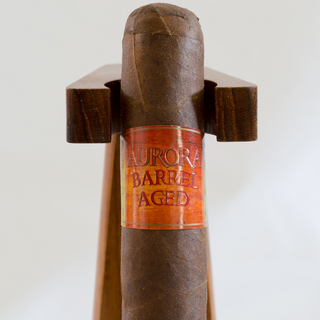 I reviewed the La Aurora Barrel Aged in a Robusto vitola.  Measuring 4.5” in length with a 50 ring gauge.    The wrapper is a dark brown with light brown veins running throughout the wrapper.

This particular blend in the Dominican Republic was created by none other than Jose Blanco.  The wrapper for the Barrel Aged spent 1 year in the oak rum barrels.  La Aurora has previously aged tobacco in oak rum barrels for their Preferidos, Cien Años and 1495 lines.

Slight amount of pepper with a little pepper bite on the lips.  There is leather flavors coming through post-draw.  Sweet fermented tobacco which balances the leather nicely.

As the first third establishes itself the leather becomes quite faint almost not detectable.   The remainder of the first third is largely sweet tobacco.  Not sure if I have an overactive imagination here but I definitely get the hint of that bourbon vanilla flavor.

About 15 minutes in I’m tasting dried oak on the post-draw on the tip of my tongue.

Quite earthy moving into the middle third.  There’s not much else of note here for flavors.

The earth flavors fall off in intensity in the final third.  There is heavy leather with the earth being a background flavor in terms of strength.

I found the pricing on the La Aurora Barrel Aged Robusto to vary fairly significantly.  Singles range from $5.50 – $7.50.  You can also pick up boxes of 25 for as low as $70 and as high as $180.   At the lower end of the spectrum these recommend a fantastic affordable value.