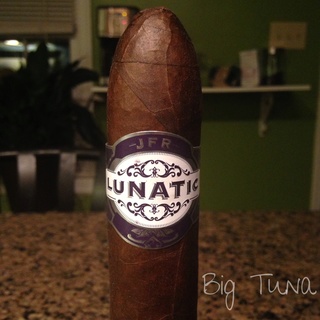 The belicoso is massive in hand and is rolled extremely well. It features a dark and solid maduro wrapper, and it has a lovely dark chocolate coloring. There are few veins present on the wrapper and the cigar is silky in texture. It is firm throughout and the purple, silver and white bands look great against the dark wrapper. The Mambo has an aroma of dark chocolate, rich earth and tobacco on the wrapper, and the foot is giving off a similar aroma that is quite enjoyable. The cold draw is easy and it is showing those Nicaraguan and Mexican flavors. 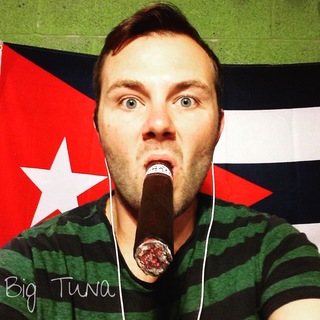 The cigar opens up by showing these rich earth and coffee flavors, and there is a touch of chocolate and syrupy sweetness with that which is stemming from the Mexican wrapper, I am sure of it. There are some tobacco notes present as well and it has a faint bit of pepper present. It is a rich and filling flavor profile, and while it is not overly complex it is enjoyable. I would say that it is medium overall in terms of the flavor profile, and the strength and body are at that level as well. It is producing a dark charcoal ash on the end and it is an ash that is flaky overall. The burn line is a little off, and I have performed a touch up which on a regular size would be minor but with this 80 ring gauge I am finding it to be a slight ordeal. The cigar is producing a tremendous amount of smoke and even with a tapered draw it is a big finish. So far, the 80 ring gauge smoke is delivering a solid flavor profile and I am in interested in seeing where it goes. When I get into the second third of the cigar I find that the flavor profile being delivered is similar to that of the first third and it is showing that coffee, earth, chocolate and syrupy flavor profile. The pepper notes have become slightly stronger in this third, same with the tobacco notes, but overall the cigar is quite similar to that of the first third. It is a flavor profile that is similar throughout, and while it is lacking some in complexity it has a solid profile being delivered. The cigar continues to produce a medium smoking experience for flavors and the same goes for the body and strength. The construction is similar overall to the first third as well and it is delivering a dark charcoal ash that is slightly flaky with touch-ups required. The draw is cool, producing a great amount of smoke, and it is a cigar that has a solid finish. The finish lingers for a while, but not in a way that makes you unable to smoke anything else afterwards. 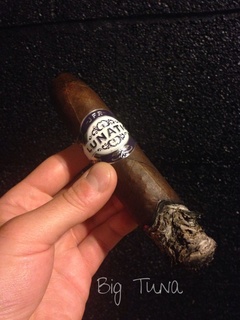 I am in the final third of the cigar now and the finish is very similar to what has been present thus far. I am getting that coffee and earth flavor profile and it is accompanied by a nice bit of pepper and tobacco notes. There is that chocolaty syrup like quality present as well, but I am getting a stronger and more tobacco spice flavor profile the further in I get. I would say that it is the strongest of the thirds and it has a flavor profile that is not as good as it was in the first two thirds. I would say that medium-full describes the final third best, and with what the description of the cigar was from Casa Fernandez when it was first released, this is where I see what they are talking about. The construction improves greatly in the final third and I believe this third has the most even burn line and solid charcoal ash on the end. The ash is not as flaky overall and the burn line itself is solid and even, preventing any need for touch-ups. The finish was cool overall, but I was taking my time and even with a cigar this large you need to be careful to take your time when smoking. The Lunatic Mambo took me just under five hours to smoke. I was exhausted by the end, ready to go to bed, and had no interest in smoking another cigar for a period of time. It actually was the first cigar I smoked after a whole week off for my annual habitat trip, and while I would never smoke this cigar after such a long time away from cigars, it does seems appropriate. I had a really clean palate and I felt that I truly did the cigar justice and was able to score it honestly. The cigar itself produced a fairly consistent flavor profile and it was a profile that was not overly complex. It was a profile that showed maybe four to five characteristics throughout, and they just kept coming back over and over again. I am not saying that is bad, there is nothing wrong with consistency if that is what you are in to, but for a smoke this long I would have preferred a little bit of variety. Then again, the smokers looking at 8" by 80 ring gauge cigars are looking for a different experience than myself who is looking for a cigar that is roughly 6" with a 44-46 ring gauge. The construction was somewhat decent throughout, and while some cigars require touch-ups, it is quite difficult to give a simple touch-up to an 80 ring gauge cigar. The strength and body smoked at a medium level throughout, which is good, because if it was completely full this would truly kill you. I found that the draw was actually decent and the tapered head helped a lot. If it was not tapered the amount of smoke would be too much and it would have been an experience which is similar to those people who smoke vapors. I am giving the cigar an 82 rating and it was an interesting experience smoking an 80 ring gauge cigar. It is not my cup of tea, but when I hear from retailers and Casa Fernandez that these are flying off of shelves and production is not able to keep up with demand then it goes to show that there are a lot of smokers looking for cigars like this in today's market. I will say that the tapered head was a smart decision that helped the cigar greatly. 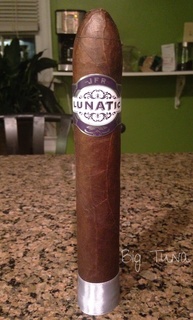 *Cigars for this assessment were provided by Casa Fernandez.

Disturbing.  Not the review - that's fine, but the cigar.  Anyone who buys an 8x80 should be punched in the face!

Comment by A Huge Nerd on July 28, 2015 at 10:00am
I generally don't even like 60RG unless the cigar is truly outstanding. 80 is just ludicrous! Especially if the cigar is mediocre.

the most disturbing thing here is the pic of Big Tuna with that sucker in his mouth. Makes him look like Little Tuna.

If someone wants to smoke an 8 x 80 cigar and it makes them happy, then they should be able to do it.  I'm all in favor of whatever expands the cigar community.  Usually I find those who smoke the 70s and 80s will eventually discover the classic sizes and what they offer.

Comment by Doug on July 28, 2015 at 12:54pm
When I lived down in South Florida, all the guys who smoked the larger RGs did it as the best bang for your buck. 7-9 bucks for at least 3 hours smoke time is what they told me. I'm all for whatever makes the person happy. I just can't smoke them comfortably.

In response to Coop's comment, in case it wasn't clear, my comment in this thread (as I'm sure everyone else's) was purely in jest.  We're not going to punch someone in the face due to their choice of cigar - if we were, we would have punched Logan long ago.

Matt is always causing trouble. Pay him no mind. Plus, no one would punch me. I am too adorable.