Originally planned for a 2013 release, the Guayacan Maduro was delayed due to inconsistencies in the tobacco.  The cigar is being released this year (2014) with a few tweaks that helped fix the problems. 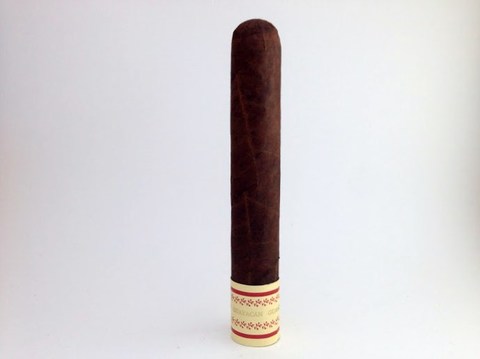 Pre-light draw reveals great resistance.  The construction looks pretty solid but a slightly large vein runs through the wrapper to the foot.

First few puffs reveal spice and chocolate.  Cinnamon, cocoa, and leather also join the mix.  The flavors are unrefined and strong.  The profile is certainly interesting and keeping my attention.

The second third begins with a dry cocoa powder flavor.  The blend smoothens out as another flavor develops that I have a hard time putting my finger on.  It is sweet and dark but not like the flavors before.

Into the final third the woodiness, cocoa, leather, and spice continue.  The other flavor is there and I still cannot describe it, but it is pleasant.  I nubbed this cigar until less than an inch.

Overall, I really enjoyed this cigar.  It surprised me with its raw power and mixed bag of flavors.  I am curious to see if age rounds things out on this blend.  This cigar rates an 89, meaning I would purchase a 5 pack.

That sweet dark flavor you couldn't pinpoint.... i felt it was like a dark cherry flavor.  very rare in a cigar profile.

Thanks Charlie! And I think you are right Jose.  Definitely in line with what I was experiencing.

I may be on my own boat here, but I really dont enjoy much out of the Guayacan like of cigars... But then again, who am I to judge?