The BLTC projects were all limited to 500 cigars, sold in Robusto (5x52) vitola, as 5 count bundles.

Disclosure: I purchased my samples from the Cigar Federation store, using a discount code. I am not paid, or compensated for reviewing this product.

“The Ginger is a great release, sitting as a solid medium strength cigar with rich flavors that aren’t going to blow out the average cigar smoker.” 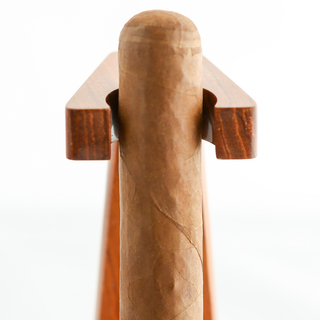 After removing the foot band on the Ginger, I picked up lots of cedar with hints of spices, earthiness and leather on the wrapper. More earth and cedar with some sweetness in the foot.

I used a single v-cut found the draw quite tight.

Sweet nuttiness with lots of creaminess post draw, with delayed leather. More sweetness on the retrohale with some spices and white pepper. Tons of smoke production with every draw. As the first third settles in the retrohale steps up in intensity with medium plus bold spices without any pepper component.

As the first third was winding down the earth and leather built up to a medium minus intensity.

As the middle third establishes itself, the earth and leather recede and the flavor profile starts to perform like the first third. The spices do fall back slightly to a solid medium intensity level.

In the last third there’s a drying mouthfeel to each draw. I start to get some bitterness, likely as a result of me smoking too fast. I purged the Ginger and found the bitterness fell off.

Total smoking time 1 hour and 10 minutes. My smoking time was a bit on the fast side, with a cigar this size I would expect a normal range to be 1:20 to 1:45.

The Ginger is a great release, sitting as a solid medium strength cigar with rich flavors that aren’t going to blow out the average cigar smoker. I’m happy I picked up a 5 pack when I did, and I’m sure I’ll be wishing I had picked up more when I smoke through them.

In the last third I found myself wanting someone to pair with. Most ex-bourbon barrel scotches would go great here, most soda pops and I could see some fruitier red wines going well.

I'd have to agree, glad I grabbed a 5er when I did, but I'll be sad when I break and smoke the last one.

I totally would have if I wasn't onsite openings stores for 8 days. But it was for sure a #heater