One of the new cigar releases for Espinosa Premium Cigars at the 205 IPCPR in New Orleans was the Especial ‘Special’. It is available in three vitolas, each in ten count boxes. It features a Mexican Capa Nega wrapper with fillers from all four major growing regions in Nicaragua: Condega, Estelí, Jalapa and Ometepe. As of September, it is now on the market

If you haven’t checked out Logan’s interview with Erik Espinosa you need to right now. It’s absolutely hilarious. 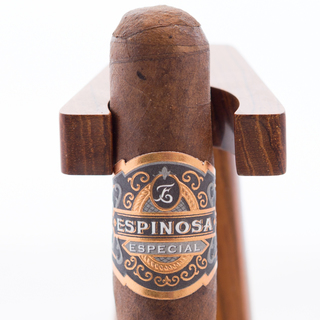 “The Espinosa Especial is an outstanding cigar.”

The first third opens with light hay. There are some spices and nuttiness on the retrohale. Once the cigar settles into the first third the spices pick up to medium plus along with a strong pepper. I start to get a vegetal flavor approaching parsley but it’s run over by the pepper and spice. At the 15 minute mark the pepper recedes to a medium strength level. Some creamy wood and sweetness starts to come through offsetting the pepper nicely. The first third is very balanced with sweet and creamy flavors offsetting spices and pepper with a smooth retrohale.

The middle third is a creamy cedar with a pepper chasing still at the medium strength level. Retrohale is still very balanced. Once the middle third settles in the pepper starts to give way to more complex spices and there’s some sweetness that plays off against it. The cedar starts to have a drying aspect in the mouth that lingers. I pick up some parsley notes as the Espinosa Especial transitions into the final third.

The last third is largely creamy cedar until the end.

The Espinosa Especial is an outstanding cigar. Although I rated it as a box split, the fact it’s available as a 10 count box would actually make this a box buy for me. A very easy box buy at that.

Rum, rum cocktails, soda, a rich scotch, bourbon cask aged ale, or even some port would pair brilliantly with the Espinosa Especial.

Its got that "creamy cedar"...Rob will dig this one!

From all the pictures I have seen of this cigar the wrapper doesn't look like a "negra" leaf...most look like they fall in the natural category. Sounds like its worth a try!