Dunhill had a few new products to introduce at the IPCPR 2015 in New Orleans. First up was the Heritage line which they describe as the first full bodied cigar since they stopped manufacturing in Cuba. They also introduced a limited release of the Dunhill Seleccion Suprema, which is limited to 300 boxes to the US.

The Dunhill Seleccion Suprema is limited to the Toro (6x50) vitola, and will be sold in 8 count boxes.

Check out our interview with Steven Kron Director of Dunill at the IPCPR 2015 in New Orleans: 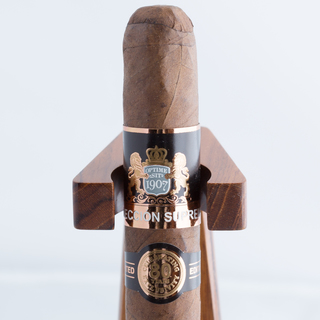 The draw on the Dunhill Seleccion Suprema opens with cereals, and nuts. The retrohale has light plus spice. As the first third settles in some pepper starts to come through on the retrohale, and some rich cedar mixes in with the cereals and nuts. At this point I'm getting a rich nutty aftertaste between draws. There's a complex honey sweetness that adds into the flavors here as well.

Still lots of rich spicy cedar, nuts and honey in the middle third. Pepper starts to build in intensity to add a bit of bite to the retrohale. The pepper does linger a bit between draws.

More of the same flavor profile going into the final third. It doesn't lose anything in the last third.
Total smoking time was a whopping 2 hours and 57 minutes.
The Dunhill Seleccion Suprema is pretty much everything you want out of a limited edition cigar.

The rating for this cigar, based on its flavor profile, puts it firmly into the box split category. Based on the fact that it’s a limited edition, you would definitely upgrade to a box buy here.

You don't want anything that's going to overpower the nuances of the cigar. A nice brown ale, lager, light scotch, would all be good complementary choices.

This is a potential Cigar of the Year candidate. The question is will it be released before my deadline?

That is a very heavy statement Coop! Now I really need to try one....

I've smoked one of these, but have been a bit busy and missed the review. I'll have to smoke it again and share my thoughts.