The 1907 by Dunhill is the newest addition to the line of cigars.  In fact, the 1907 is the first full-time cigar to be added to the Dunhill family since 2001.  For those of you wonder, I was still in college.  Go Hornets! 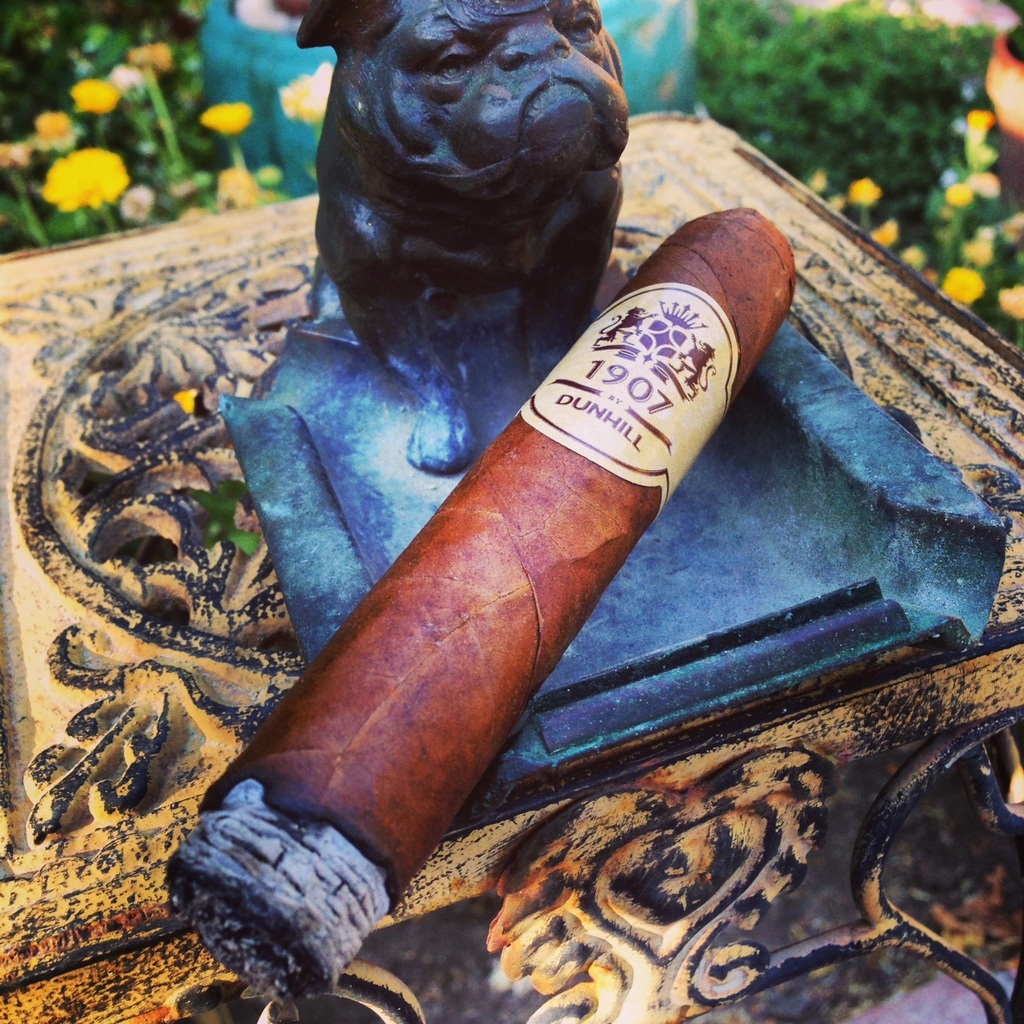 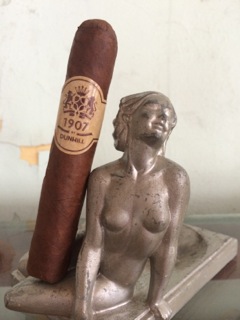 The light brown wrapper only has minimal veins and the seams are pretty much undetectable. The cold aroma is a crisp cedar & cocoa, as is the cold draw. From the outside, the Dunhill 1907 has flawless construction and pleasing aroma.

The first third has a creamy, mild chocolate note with cedar undertones. The smoke production is nice, if only medium, and the construction shows in the flawless burn. The second third became even creamier, with great chocolate flavors and relatively no spice so far. The smoke increases here, and is now coming out in thick, white clouds. The final third of the Dunhill 1907 sees the emergence of a little bit of cedar spice, and the chocolate flavor has turned from a milk chocolate, to a bitter chocolate.

The Dunhill 1907 was a very pleasant chocolate/cedar bomb for me. The construction made for an effortless smoke, with exceptional burn and very clean ash. I absolutely loved the first inch of the Dunhill.  I was hit with a ton of great flavors from the first puff.  The profile started out with a doughy sweetness along with toasty cedar and a mild cocoa note.  The flavors were thick and well balanced and the aroma was awesome.  My wife actually came out side and sat with me because it smelled so good.  Needless to say, this never happens.

The final portion of the 1907 left a few things to be desired.  The coffee note completely took over and became slightly bitter while the sweetness disappeared.

Throughout the entire smoking experience, which took about 75 minutes, there was not a single hint of spice and there was very little flavor to be had on the retrohale.  The 1907 started out with a bang of big-time flavor but fizzled out after the mid point.  Is this something that will correct with time?  I believe that it will. The flavor profile was full while the strength stayed in the medium-minus range.

I loved the beginning, enjoyed the middle and did not like the end.  I think there is potential here and with that in mind, I've given the Dunhill 1907 a rating of 88 and I have every intention of grabbing a 5er. 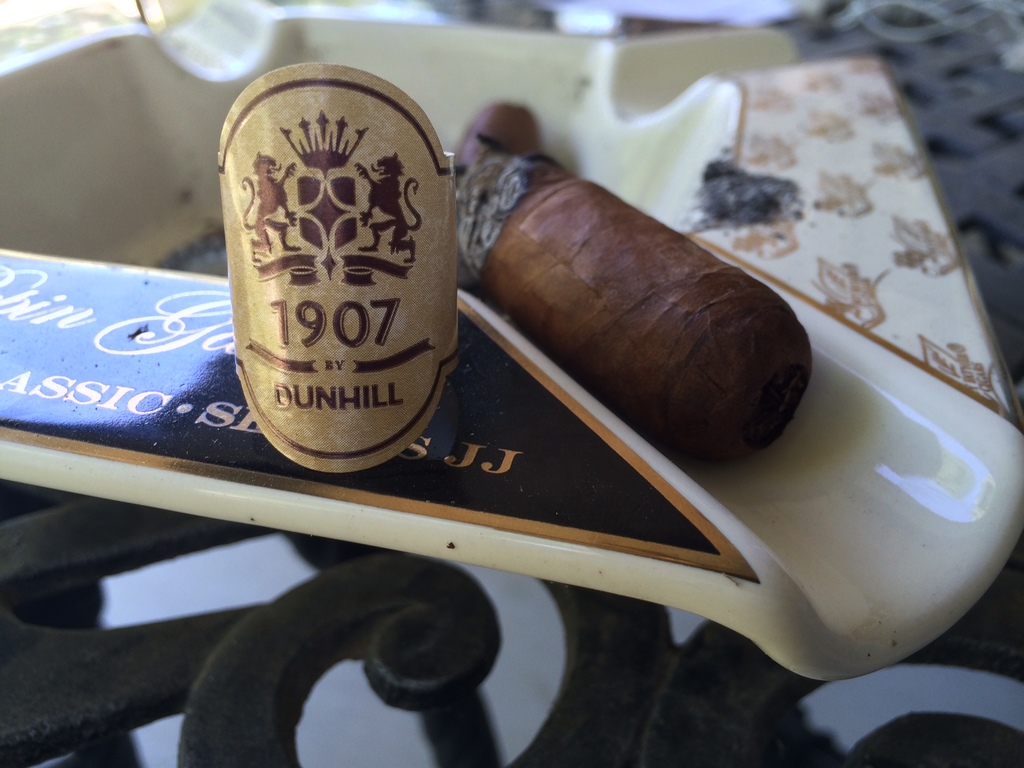 The dry draw had a heavy stone fruit note to it, which normally means I am in for a treat.

The first third was medium body full flavor with clove, light cocoa, and creamy coffee through both the nose and on the draw.  The combination reminded me of bread pudding at times, or flan at others.

The second third saw more of the clove flavor, with the stone fruit setting in.  It was cherry in nature, without the sweetness, but the character was there in the nose and the finish.

The final third saw a shift to light green pepper and clove notes, with some hints of the bread pudding I had noted earlier.  Not as full flavored as the first two thirds, but still very enjoyable.

I think Dunhill made a great smoke that is very full flavored on the draw and should be a hit.  This is a no brainer five pack for anyone whom is a medium bodied fan.  The 1907 was not a spicy cigar at all, but did offer a unique kick.

Received these samples of the 1907 by Dunhill from General Cigar the other day, and I almost immediately smoked one before waiting a bit longer to smoke the second. While I don't necessarily love Dominican cigars, the tobaccos used in this cigar intrigued me and I do enjoy Mata Fina in some blends.

Both cigars smoked for review were firm, beautifully wrapped light brown specimens with minimal veins and seams.  The pre-light draw is sweet tobacco and a bit of cedar.  I light the cigar and get a nice sweetness off the bat with a very subtle spice in the background.  Smooth tobacco with a bit of sweetness is the dominant flavor through much of the smoking experience with some subtle spice and some hints of floral flavors.  The smoke is extremely thick and creamy.  Very mild cigar for me, but most likely in the mild-to-medium wheelhouse for a typical smoker.  Burn was impeccable, but draw had a bit of restriction at times which most smokers probably consider perfect while I typically like a bit of a looser draw.  I was worried that I didn't let the first sample I smoked rest enough before indulging, but my experience didn't improve vastly with a bit of rest.  The fact is that this was much too mild for my tastes, and while I could see myself enjoying this on a Spring Saturday morning with some coffee, at the price point, there are other cigars I'd go to first.

Once again, this format excels in giving a broader perspective on individual tastes when rating a cigar. Dig this!

Comment by Craig Madbricky on May 29, 2014 at 7:57am
Geez Matt,I get it, you don't like this profile of cigar, lol
Dustin gets "Stone fruit" and cloves with green pepper. Wth is stone fruit?
Sounds like a good morning cigar, I agree it's too pricey,better smokes for the money at that price. Thanks for the heads up fellas! :-D

Craig, depends on the smoker.  This is a dinner cigar for me really, and I think would go well with a pair.  Stone fruit is cherry, peach, plum, nectarine type fruits.

I dont know that there is a cigar that has come out of General that I have liked that much. Doesn't seem like a cigar that I would pick up myself.

Comment by Generally Useful Jared on May 30, 2014 at 8:19pm
Based on the flavor profiles, I'd almost say no surprises in these reviews :) Sounds like something that, while not really blowing me away, something I might still enjoy for the flavors that are there. Agree with Matt, this might be a good morning coffee smoke!

I smoked one and and unfortunately it was an extremely firm pull.  Could barely get a good smoke off of it and it offset the rest of the experience for me.  I would definitely smoke another that had better construction to be able to see if it was actually an enjoyable stick.