The English came to me by way of Johnny Brooke of Drew Estate.  They sponsored a user giveaway on Reddit as /r/cigars hit their milestone for users.   It had been resting in my humidor for 373 days before I had the opportunity to smoke it. 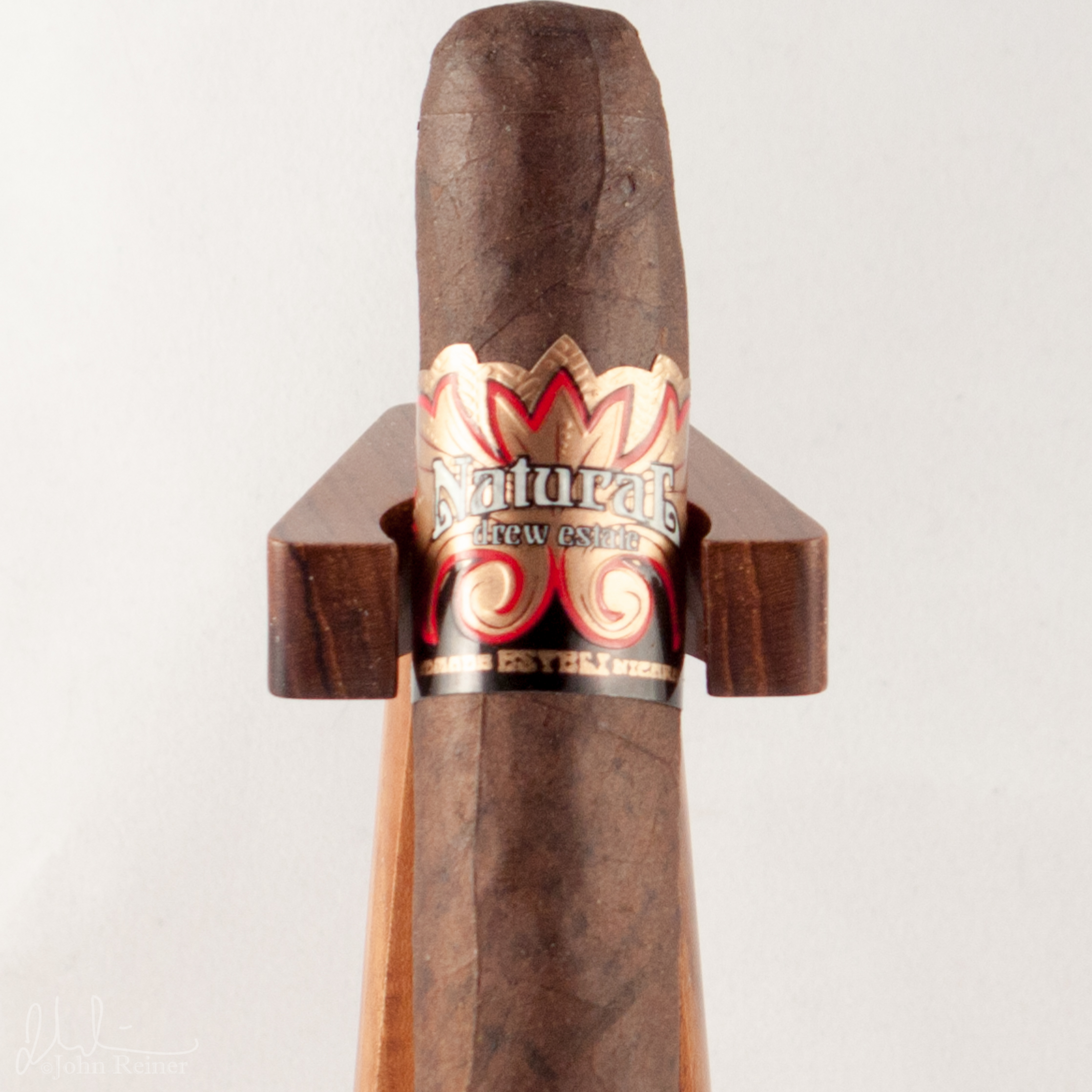 A strong combination of cedar and rich sweet vanilla.

The Natural English is a Toro vitola measuring 6” x 52 ring gauge.  The cigar has a regular band as well as a band on the foot.  I’ve noticed more manufacturer’s putting an additional band on the foot, I’m assuming to protect it from damage in transport.

It's important to note that the Drew Estate Natural line is not infused like the ACID line.   The flavors come from a sweetened cap and pipe tobacco that is included in the blending.

There is an immediate taste of sweet syrupy vanilla on my lips and then present as a post-draw aftertaste.  There’s some pepper present here as well as a hint of cedar but the vanilla largely dominates the flavor profile.

After about 10 minutes the intense sweetness falls away and becomes more balanced, although still the dominant flavor present.

More of the same flavors here.  It’s tough to make a determination of where the first third ends and the second third begins because there is no noticeable alteration in flavor strength.

There is some spice and pepper that increases in intensity as I move into the final third.   The last third is by far the most balanced.

An enormous amount of smoke production, very similar to the Liga Privada or Undercrown lines from Drew Estate.   No issues with the draw here.  Total smoking time was approximate 1 hour and 20 minutes.

The Drew Estate Natural English will run you about $6.50 – $8 for a single.   5 packs average around $29.  The Natural English are also available in boxes of 24 for $125.     This is a pretty good value if you enjoy cigars with some flavoring to them.

Another option is can pick up a Natural 6 pack sampler which gives you a chance to try every blend with the exception of the English.  Those typically cost $25.

I don’t typically enjoy flavored or infused cigars  My original statement here was a bit ambiguous.  I have a tendency to lump flavored, infused or anything out of the ordinary into the same group. This is not fair as they are each distinct product categories.

I found the Drew Estate Natural English enjoyable.  I’m certainly not saying it is as complex as the Liga series, or even the Undercrown series, and I wouldn’t smoke these on a regular basis as I do find the initial vanilla syrupy flavor to be too overpowering.  But I think I’ll try experimental pairing in the future with the Natural, and I may have a few in the humidor to smoke occasionally.

If you’re in the market for something a little different, or you enjoy flavored tobacco you’ll want to pick up a single or 5 pack of the Drew Estate Natural English to try for yourself.

Agreed. :) I am not a big lover of infused cigars. Only had a handful, and I much prefer a standard cigar. But, I had the Natural Dirty Torpedo and really enjoyed it. They have there place and I'd smoke one again. It was a great stick for wandering around the flats. lol

Comment by Generally Useful Jared on September 27, 2013 at 7:32pm
As a pipe lover - started on pipe long before cigars - I may just have to get some of these. Never really considered it, but this may just be right up my alley.

If you enjoy the pipe, you should definitely try the Natural.  Hand-in-hand from what I've heard.