After reviewing the Drew Estate Liga PrivadaT52 two weeks ago I figured I would follow it up with another Drew Estate cigar, the Dirty Rat. It frankly is a little tough to find information about the Dirty Rat anywhere on the internet. The only thing I found which I believe is credible was this from Halfwheel.

The idea behind this blend was to produce a Corona-sized cigar with made with seven different tobaccos — five different fillers + the wrapper and binder. Unfortunately, it costs almost the same to produce this blend in a Corona as it does to make it in a Double Corona size and it needs to be made in the Corona to keep the flavor and strength profile.

Nicholas Melillo created the “Dirty Rat” blend using the five-fillers-in-a-Corona techniques he developed on his own and it was simply delicious. We have been making them since early 2009 in small batches for own consumption and to share with friends. We have been discussing the possibility of releasing this product into the marketplace, the problem is it costs so much to make this Corona due to the difficulty of the bunch. 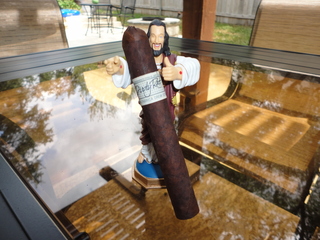 Cigar Purchased: Got four from a r/cigars trade

I have been on a Liga Privada tear lately and smoking through my Unico Serie stash probably more quickly than I should be. It is super-hot and humid outside today so I figured I would go with the Dirty Rat due to the smaller vitola and wanted something that would satisfy me for the whole day.

The Dirty Rat looks like it got hit in the face with a sack of nickels. The veins are super dark and stick out like a sore thumb against the dark habano wrapper. Along one of the veins there is lighter tan discoloring which runs the length of the entire vein. I have no idea what it is or what caused it.

I am a sucker for pig tail caps but it looks like the tail of the pig got cut off on my Dirty Rat. The cap is twisted in such a way part of the cap isn’t touching the cigar. It almost makes a cave like shape. The roll on the Dirty Rat is one of the densest rolls I have seen on a corona. I think this probably has something to do with using five different tobaccos in the filler.

When I say the Dirty Rat is a rugged looking cigar, believe me it is. If I hadn’t already smoked the Dirty Rat before I would be little worried about it, assuming I didn’t know anything about the Unico Series. I think this is was part of the plan to make this cigar look rugged and blow your mind with complexity.

The draw was a little tight, as I expected. It was difficult to pick up any flavors here but I was able to catch some very faint barnyard notes.

The draw opened up quickly on the Dirty Rat and allowed me to pull a ton of smoke. I was met with a unique smoked pepper flavor. It was strong but not over powering at all. The spice quickly faded and a nice earthy leather emerged. Next a very strong black pepper flavor came and got to be pretty good on the retrohale and the back of my tongue.

Just like the T52 I reviewed last week there was a ton of resting smoke on the Dirty Rat. The ash had a salt and pepper look to it. The smoke was very creamy, almost like buttermilk. The black pepper backed off and was replaced by earthy sweetness, which I assume comes from the Mata Fina.

I was very impressed how well the ash held on the Dirty Rat.

It opened with some nice nutty notes that were like cashews and peanuts. It had a very faint saltiness to it as well. The Dirty Rat really mellowed out in the middle to a medium in body and very creamy cigar. There were notes of cocoa and a very faint cinnamon. I can’t explain in words how amazing the nutty flavors were in the Dirty Rat. You will need to smoke it to understand what I am talking about.

Unlike like most Liga Privada’s the band on the Dirty Rat was easy to remove. The closer I smoked to the end the more refined the flavors became. It was strange since most of the cigars will ramp up in body the closer you smoke to the end.

The Dirty Rat remained super cool and didn’t get acidic at all. I was really impressed how a small vitola like this could remain so cool burning. I love there is no aftertaste on the Dirty Rat. Right now my palate is clean and doesn’t have any funk on it.

I love how the flavors are not linear and constantly changing. The Dirty Rat boomed a ton of smoke yet remained cool all the way to the end. It was very unique to see a cigar that actually mellowed in body from full to medium throughout the entire smoke.

I had to use my slow smoking method on the Dirty Rat, otherwise I would have smoked it so damn quick it wouldn’t have even been funny.

For those that care my live oak trees in my yard are starting to shed their acorns. The entire time I could hear acorns falling like bombs all around me. There were several which came close to hitting me. Every time I hear one fall I covered up the Dirty Rat :) . One acorn even hit my computer. Not kidding.

Only Liga's I have had are the Papas Fritas, and really liked those. I think I have a number 9 my wife bought me in my humidor but haven't tried yet. I think they may be too strong for me. #BChristinthehouse

#BC is always in the house my friend. I really can't thank you enough for sending him to me.

Commas save lives Logan... you should give them a try sometime...

Also, you are a jerk.

just sayin... you can use commas... in fact, you're encouraged to use them

I smoked one tonight (the box I got with very light,claro,T52 wrapper) and this puppy was strong. The band was yellow from age. So much smoke, so rich/flavorful....I will never quit loving them and stocking up on them. Incredible cigar, worth the hype no matter what people say!