When Rob and I started Sharing Our Pairings there wasn’t much on the cigar landscape in the way of cigar pairings. We fast forward to 2015 and it seems that every other week we’re reporting on a cigar blend for pairing.

The Dram Cask No. 1 is one release a 4 cigar lineup from C & C Cigars specifically designed for pairing with whisky. Each Cask No relates to a profile of whisky they are intended to be paired with. The Cask No. 1 is aimed at citrusy / woody profiled whiskies. The nose on the DRAM Cask No. 1 is sweet hay with some faint barnyard. The Tomatin 12 French Oak whisky noses of orange marmalade, vanilla and some oak undercurrents.

I used a single v-cut and found the draw to be slightly towards the closed end.

Tons of milk chocolate on the opening draw. On subsequent draws I start to pick up some hay as well.

The Tomatin 12 French Oak has a thick mouthfeel,almost syrupy. Bright citrusy notes with an orange peel finish. The oak influence is prominent and through the finish as well.

As I combine the two I start to get more woody notes off the DRAM Cask No. 1 and from the whisky the oak becomes a crisp and dry. I find that the sweet citrusy influence of the whisky does a great job of balancing out the woody tones of the cigar. The orange from the whisky pairs brilliantly which the chocolate flavors as well. Chocolate flavors are quite pronounced on the retrohale with a chaser of hay. The whisky is delicate which doesn’t overpower.

I might find myself pairing a hefeweizen with the DRAM Cask No. 1. I cannot get over how much chocolate flavor is coming through in the first third. I know it was blended to be paired but I can’t help but feel it would stand well on it’s own as a classic Connecticut. As the cigar burns towards the middle third the strength of flavors starts to fall off.

The flavors are nutty and hay going into the middle third. It’s still pairing well with the whisky and I’m picking up almost a candied fruit here. The chocolate, which fell off in intensity to light strength, starts to pick up. At this point the interaction of the candied fruit notes from the Tomatin, and the chocolate of the DRAM Cask No. 1, reminds me very distinctly of a Terry’s Chocolate Orange. The flavor complexity here is quite impressive.

The nutty notes and chocolate are both at about medium strength in the last third with some slight loam coming through. I can’t help but think a rich Kenyan coffee would be an amazing combination with the DRAM Cask No. 1 first thing in the morning. The flavors transition in the last inch and a half to become quite sweet and creamy.

This DRAM Cask No. 1 pairing is a grand slam for me. I would absolutely go in for a box split of these in the near future. I will no doubt be experimenting with different pairing combinations in the interest of “research”.

The Tomatin 12 French Oak paired brilliantly. I could see a Hefeweizen or a full bodied fruity Kenyan coffee being a great choice as well. 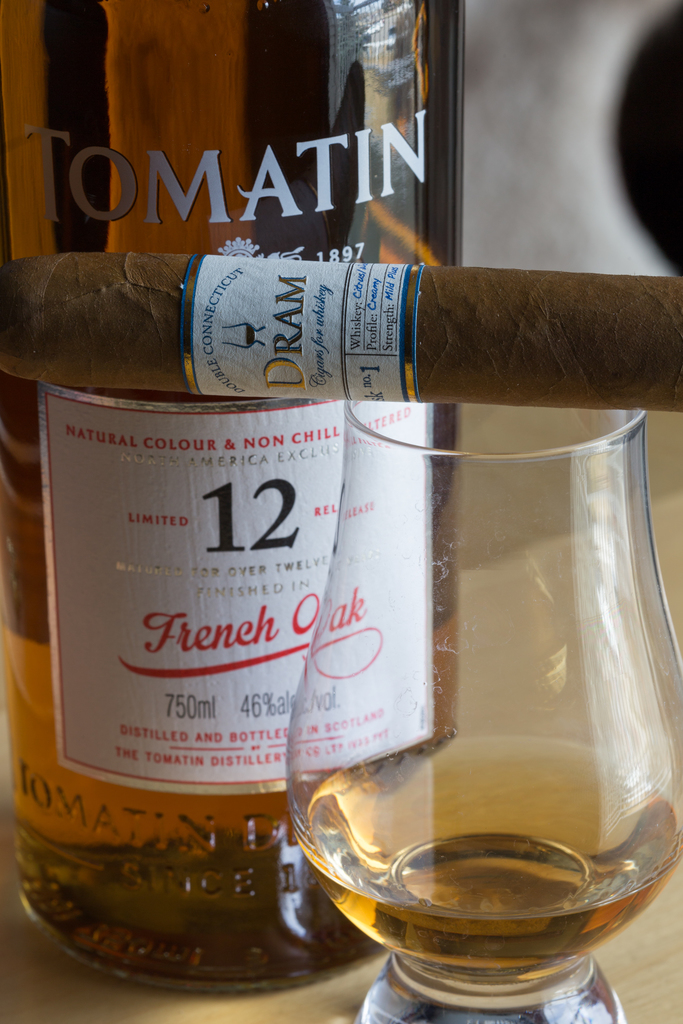