The Cohiba Robusto Supremo is the latest Edición Limitadas for 2014 along with a Partagas and a Bolivar. In the past the Edición Limitada cigars have been unusual production sizes, and the decision to go to a very large ring gauge certainly fits that pattern.

First announced at the Habanos festival in February of 2014 they are now widely available in most markets, albeit in limited production 10 count box quantities. 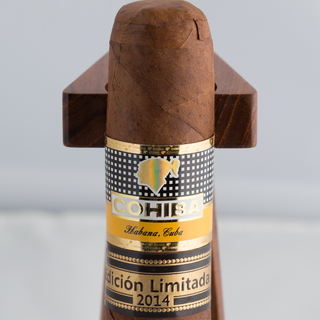 “Give the Cohiba Robusto Supremo three years of age and I think it could be amazing.”

The nose on the Cohiba Robusto Supremo is exactly what I would expect from a Cuban cigar. Some sweet cedar, hay and a hint of barnyard.

I found the cap to be quite soft, possibly under filled. I used a v-cut and found the draw to be well towards open.

On the first few draws I get a sweet creamy and earthy combination. The retrohale is very balanced with the sweetness being the dominant flavor. A few more draws and I’m picking up hints of light coffee and also faint pepper. The sweetness builds in intensity and starts to linger post draw, coating my tongue. At about the 15 minute mark I get a beautiful milk chocolate that starts out subtle and then establishes itself at the mild-medium mark. The first third was enjoyable but I didn’t find it overly complex

The middle third kicks off with some nutty notes. There are still hints of coffee, but the chocolate has dropped off entirely.

There' is some hay and earthy flavors in the last third. On the retrohale I’m able to get some cherry notes with the earthy flavors being more on the bitter spectrum.

I can see the potential for aging here. It’s good but I wouldn’t categorize it as great. Give the Cohiba Robusto Supremo three years of age and I think it could be amazing.

This cigar is crying out for pairing with a very strong cup of Cuban coffee or espresso. Aside from that I would likely reach for some Legendario rum.

Nice review. I couldn't justify grabbing some of these at $50 each and waiting a few years for them to maybe be as good as the price demands.

I tasted lots of potential in the one I smoked...I agree with you, I wont be smoking any more of mine for a few more years...very curious to try another after some quality down time. I paid $38 each for the 3 that i picked up...they go for $70 up in "Surgeon Land".