We had a chance to talk to Robert Caldwell at the IPCPR 2015 in New Orleans about one of the new cigar releases, the Blind Man’s Bluff. The cigar is being made at the Agroindustrias Laepe S.A. in Danli, Honduras.

Check out our interview with Robert Caldwell at the IPCPR 2015 in New Orleans. 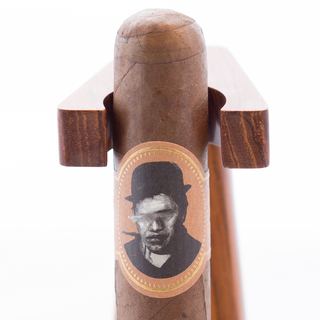 “The Blind Man’s Bluff is a medium bodied cigar with some tasty spices throughout.”

The nose on the Blind Man’s Bluff is a spicy hay with aged wood. I’m also getting some notes of chocolate.

I used a v-cut and found the draw slightly tight.

The first third starts with medium spicy pepper on the retrohale with some leather that sticks around on the post draw. I’m getting a dry sweet hay on the fest few draws. At about the 10 minute mark there’s this great combination of spicy and savory flavors that continue to go back and forth.

The middle third is a dirty earth and chocolate combination to start out. Still getting some great balanced spices which have decreased in intensity on the retrohale. The combination of flavors gives it a nice richness. At the halfway point the spice comes back in intensity to a solid medium strength.

The last third is a combination of spices and cedar that carries through to the end. Very tasty.

The Blind Man’s Bluff is a tasty medium bodied cigar with some tasty spices throughout. If you like spice in your cigar but don’t want to be blown away this is a great choice. This is a no-brainer 5 pack pickup, I look forward to experimenting with some pairings in the future.

This would go great with some aged rum, root beer, or even a sweet dessert wine.

Retailer Comment by Mickey irratebass on September 1, 2015 at 8:29am

I got to smoke one this past Saturday after I smoked the mind blowing Eastern Standard. I thought it was a good cigar, but not great. I agree with all of your flavor notes and it would also be a fiver for me as well......now the Eastern Standard....anyone wanna do a box split?

Great review John...I'll be giving these a try when they come out. I've been disappointed with his DR releases so I'm excited to see how he did in Honduras.

Retailer Comment by Mickey irratebass on September 2, 2015 at 7:19am

I'm eager to try this - I heard it was one of the better releases from the show.

Mickey - The Eastern Standard Lancero is to die for.