Normally, I find Alec Bradley cigars to underwhelm me. I have smoked the majority of their stuff and none of their cigars jumped up and said, “this is a great cigar”. That fact might have now changed.

Welcome the Alec Bradley Nica Puro. Below is a little about this cigars from my friend Cigar Coop.

The Alec Bradley Nica Puro is a new core line that has been released by Alec Bradley in 2013.  This has been a much anticipated release by Alec Bradley Cigars.  First up, this marks the company's first Nicaraguan puro (all Nicaraguan tobacco) cigar to be released.  Secondly, cigar enthusiasts have been waiting quite some time for this show.  The cigar was announced eight months ago at the 2012 IPCPR Trade Show in Orlando, Florida.  While the Nica Puro was targeted for a late 2012 release, a decision was made to delay the release into 2013.

Without and further ado, time for me to get smoking! 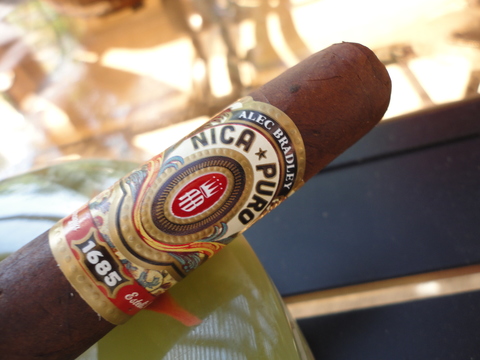 Cigar Purchased At: Free Sample at the AB IPCPR Party

The Alec Bradley Party at the Palms during IPCPR was the best party during the show, hands down. I was able to smoke one Nica Puro during the party. Although it was like 1AM and my palate was torched from about 12 previous cigars I had smoked during the day, I remember really liking the Nica Puro. Now the question is will I still like it after detoxing from Vegas for about three weeks?

Pretty much flawless, at least according to me. No veins in the wrapper which were unsightly. The Habano wrapper had a really nice sheen in the morning sun. No complaints at all.

There was some spice through the nose and the faint taste of bread dough. It was a very odd but enjoyable combination which was unexpected. The air flow through the cigar seemed ideal and I am going to assume the Nica Puro will be a smoke stack.

On the light there was a very strange bready sweetness that started on the first few puffs. It was almost like a shortbread cake in nature. This quickly changed into an under tone of earthiness mixed with the spice I experienced on the cold draw. I was impressed to see these two unique flavors appear so quickly in the Nica Puro.

As I continued the smoke, the spice continued to dominate the overall profile. The Nica Puro then changes in profile to a nice creaminess and sweetness, which was unpinned by the spice.

The second half of the Nica Puro delivered some cocoa and sweetness and the spicy notes remained through the end of the cigar. The first half of the cigar was more complex and threw a couple of different changes at me, while the end was pretty much unchanged. I would have liked to see more shifts in the flavor profile.

The end got a little hot and soft and turned slightly acidic. The end became a little mottled and the flavors were difficult to pick up.

The Alec Bradley Nica Puro is a pretty decent cigar. I think most people who gravitate to Nicaraguan tobacco will enjoy this cigar, but people like Catfish will find it too strong. I really enjoyed the spicy undertone of the entire smoke and the mix with the cocoa, sweetness, and shortbread flavors. I really wished the end of the cigar was a bit more complex, but at this price point it can’t really be expected.

I believe there are better Nicaraguan puros out there on the market today, but this one is worth a try, especially if you like Nicaraguan tobacco as much as me. Also, the price point makes it hard not to try.

I really liked the two bands that were used on the Nica Puro. When looking at the cigar it doesn’t look like there are two bands but there are.

I remember liking the Nica Puro a lot more when I smoked it on the private balcony of the Palms Pool. I think I might have been too busy staring at the cocktail waitresses :)