If you haven’t previously had the chance to try any 1502 cigars or see Enrique Sánchez on Stogie Geeks or Cigar Chat, you are truly missing out. I would say Enrique ranks among the top people I have met in the industry in terms of being genuine, kind, and passionate about the tobacco industry.

I had the good fortune of trying their 1502 Robusto in 2013 where it made my #2 Cigar of the Year. The 1502 Black Gold toro also made my list at #12 cigar of the year in 2014. To say I was looking forward to the lancero releases is understating significantly.

The lancero vitola was released in April of 2014, but unfortunately I didn’t have the opportunity to review it until January of 2015. 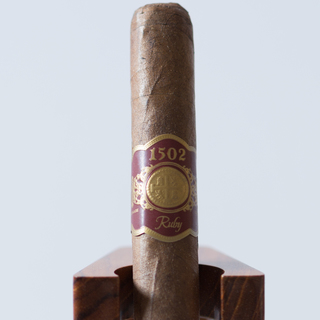 “This is yet another great release from 1502 Cigars who already has a number of excellent cigars to offer.”

The nose on the 1502 Ruby is prominently rich Nicaraguan  tobacco and almost overwhelms anything else. As my nose starts to adjust I start to get pepper, coffee and some light hay notes.

On the cold draw I’m able to detect lots of pepper, hay, and an aged wood chaser.

The first third starts with sweet tobacco, and a medium strength pepper. There is a rich mouthfeel from the smoke. As I retrohale I was able to get pepper at a more medium-full level. The pepper tends to linger on the center of my tongue after the draw. My initial impression is that there is more ligero in the lancero vitola vs. the 1502 robusto I had previously reviewed.  As the first third starts to settle in there is this intense vanilla sweetness that starts to balance out the pepper very well.

The second third finds the 1502 Ruby lancero really hitting it’s stride. It is very smooth on the draw with the pepper falling below the medium strength level and the sweet creaminess taking over as the dominant flavor. I’m reminded how full bodied the cigar is at the halfway point as I slow down my smoking.

In the last third there is a transition to include a lot of earthy notes and the strength continues to pick up finishing in the full plus category.

Total smoking time was 1 hour and 56 minutes, paired with water.

This is yet another great release from 1502 Cigars who already has a number of excellent cigars to offer. Although I think I prefer the larger 1502 Ruby robusto to the lancero, it’s a strong and complex cigar that I’m not going to hesitate to pick up some 5 packs to keep on hand.

Enrique recommended a Miyagikyo 12 Japanese whisky. I could also see this pairing really well with Four Roses bourbon, or a heavily sherried scotch like Amrut Intermediate, or even a Glenmorangie Lasanta.

Good stuff John. I still think this is one if the finest +-$7 blends out there, just my humble opinion. They age well and get even smoother with time.