(Miami, Florida) January 28, 2015 - The Dominican Cigar Review, noted as the most important cigar magazine in the Dominican Republic, has just made public its choice of “Untamed” by La Aurora as Cigar of the Year for  2014. La Aurora “Untamed” was unveiled last July in the IPCPR Show, in Las Vegas. The Dominican Cigar Review panel of experts concluded that due to Untamed’ s perfect balance between flavor and body,  and superior construction, a FIVE STAR rating and the award of Best Dominican Cigar in the year 2014 should be awarded. 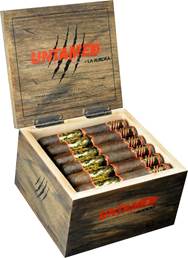 Untamed by La Aurora is a new development, that combines the tradition of a century, working with the best tobaccos in Cibao Valley, with the will to stay ahead of the curve to provide the market new and distinct products.

La Aurora’s team has achieved an incredible cigar that has no seco leaves in its blend: three different ligero Dominican leaves and a viso Nicaragua, with a binder harvested in Cibao Valley, Dominican Republic, and a precious Connecticut Broadleaf wrapper from the USA.

Guillermo León, president of La Aurora, has shown his satisfaction for the award: "La Aurora’s team has created a really incredible cigar, going beyond our traditional products.  They have successfully created an innovative product that works because of the enormous quality of its tobacco leaves". Untamed is, for La Aurora, a step towards the future for a company which boasts a centenary in tradition.

Untamed by La Aurora Robusto is 5 x 50, but the complete gama is:

Founded in 1903 by the Leon Family, La Aurora is the original cigar factory in the Dominican Republic with a portfolio that includes its namesake brands, La Aurora and Leon Jimenes, as well as, La Aurora Preferidos, Guillermo Leon & Fernando Leon brands.

These were pretty good...

La Aurora Pref Maduro is one of my favorite cigars. I always have a box on hand. Haven't tried the unnamed. Looking forward to it.