(Miami, Florida) April 17, 2015— A.J. Fernandez Cigars, known for producing consistently highly rated cigars is proud to introduce the “New World Brute” as a retailer exclusive for Serious Cigars in Houston, Texas.  The New World Brute comes in at a hefty 6x 66 size, and will make its debut at the Texas Cigar Festival taking place this April 25, 2015. 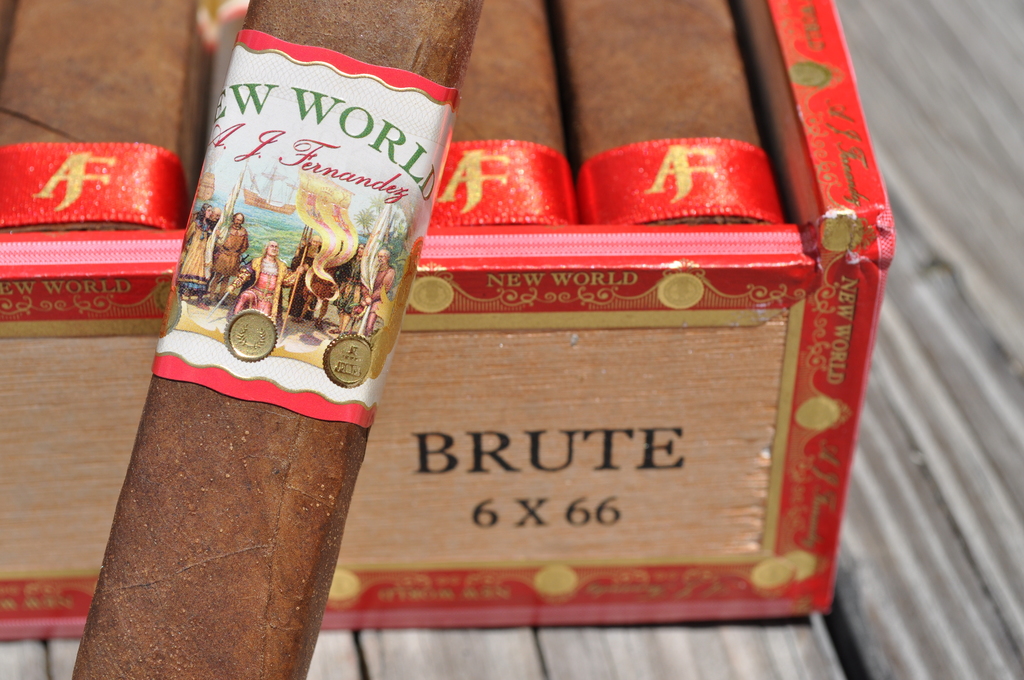 Ron Lesseraux owner of Serious Cigars said,” A.J. Fernandez’s New World is a special cigar, and we love to offer our customers unique products. It only made sense to create a special edition New World, for Serious Cigar customers.
It is true that everything is bigger in Texas, so we decided along with A.J. to push the limits, and create the New World Brute”.
Master blender A.J. Fernandez created the New World brand as homage to the discovery of [the] then “mystical smoking leaf” called “tobacco” by the Europeans, when their ships landed in what is known today as the “New World”. The New World was introduced at the 2014 IPCPR, and went on to attain the honor of “Number 1 Cigar in the World” in 2014 by Cigar Journal Magazine.
A.J. Fernandez said:  “Serious Cigars has always championed our cigars and we are more than happy to create the New World Brute for them. We look forward to a great response by the consumer.”
The New World Cigar is a medium to full bodied cigar, with an amazing aroma. Smokers of New World will experience elements of sweetness, spiciness in a very balanced and refined cigar. The New World Cigar is composed of a Jalapa binder, Viso Ometepe Filler, Condega Ligero, Esteli-Finca Soledad Ligero, wrapped in a beautiful Dark Nicaragua.
The New World Brute has an MSRP of $6.95 and can only be purchased at Serious Cigars or through their online store at: http://www.seriouscigars.com.
ABOUT A.J. FERNANDEZ CIGARS:
A.J. Fernandez Cigars is based on the rich tradition of the Fernandez cigar legacy. A.J. Fernandez now produces unparalleled, hand-rolled cigars in Estelí, Nicaragua which have garnered numerous top ratings and acclaim from cigar publications and consumers alike.  Today A.J. Fernandez continues the family tradition as he oversees production and manages day to day operations in his factory in Estelí.
For more information about A.J. Fernandez Cigars, please visit www.AJFernandezcigars.com Follow A.J Fernandez Cigars on Social Media here: Facebook: AJ Fernandez Cigars, Instagram: AJFCigars, Twitter: AJFCigars
For media inquiries please contact Creativas Group Public Relations via:  info@creativasgroup.com.