The Rake is the latest full production cigar to be released by MoyaRuiz cigars.  On the limited edition front, Danny and Nelson recently announced the release of the Chinese Finger Trap which is limited to 1,000 boxes.

The Rake is made at Erik Espinosa's La Zona factory in Esteli and is slated to hit the market later this month.  The Rake will be available in four sizes: 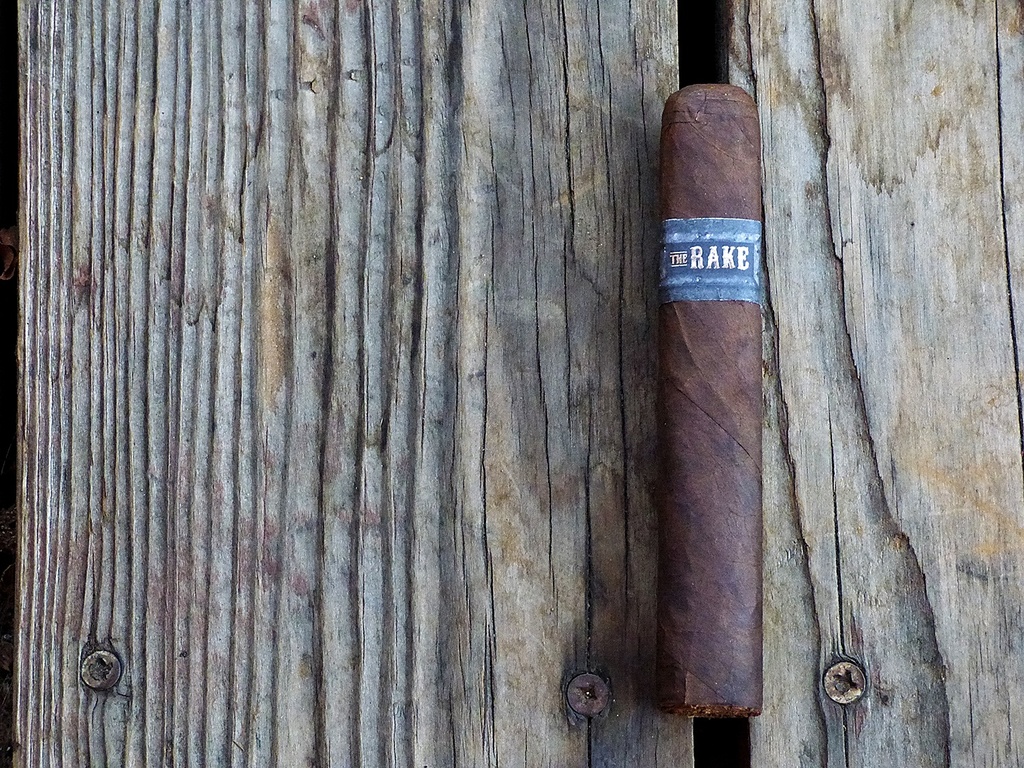 Samples for review provided by MoyaRuiz

Pre-Light: I love the rough, rugged and raw look of the Connecticut Broadleaf wrapper.  When you combine that with the distressed feel of The Rake band you end up with a very cool look.  If you look closely you'll notice that The Rake logo is one of those "speakeasy" style peep holes.  You know, the kind that slide open and the gigantic bouncer asks you for the password.  It's also like the front door to Teddy KGB's place. "Vant a cookie?"

As I mentioned before, the Connecticut Broadleaf wrapper had a nice toothy feel to it and smelled of warm dark chocolate, earth and wood.  The cold draw was clean and tasted of leather and black pepper.  The soft box press had a nice feel to it.  I liked that it wasn't a sharp press. 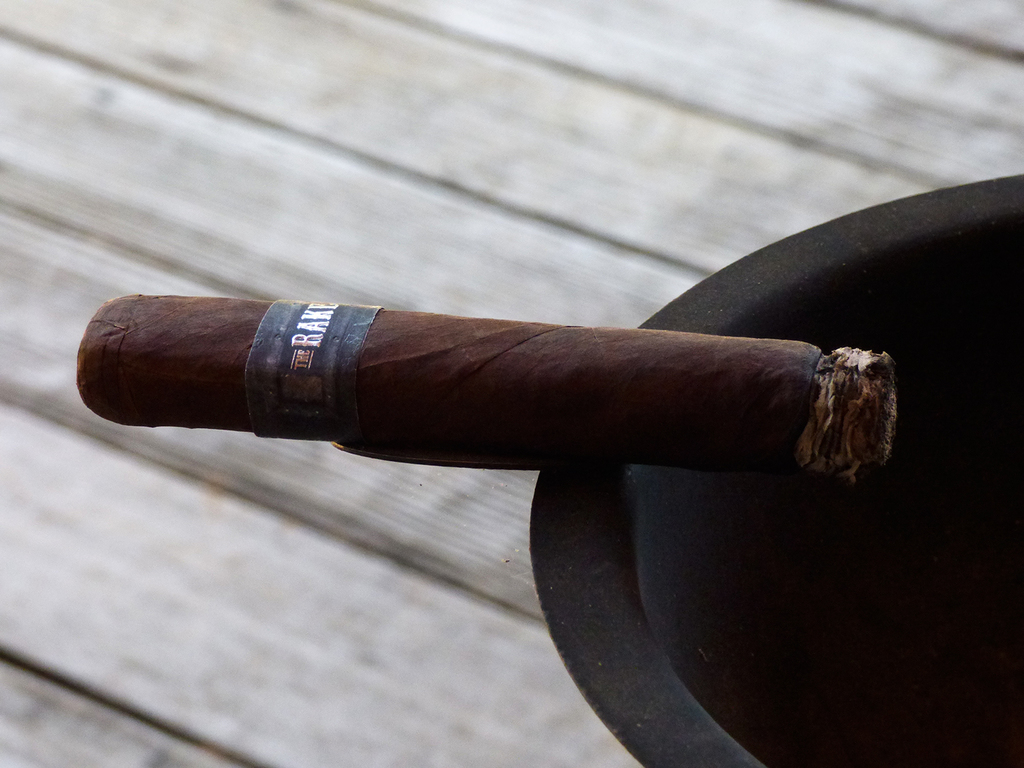 Beginning: The Rake started off with big, bold notes of coffee and earth with a mild dark chocolate bittersweetness.  There was a pronounced note of black pepper on the retrohale that threatened to overpower things early.  Thankfully that threat never came to fruition and the black pepper offered a nice balance to the coffee and earth notes.  As I progressed through the first third I was hit with a jammy dark fruit flavor (similar to dates or prunes) that I really enjoyed.  The profile was complex and balanced as the first third came to a close.

Middle: There wasn't a ton of transition in the middle third.  The profile offered notes of coffee, earth, jammy dark fruit with a little dark chocolate on the tongue and black pepper on the retro.  The experience stayed pretty consistent throughout.  Surprisingly the strength wasn't a factor.  Given the amount of ligero used I was expecting more of a powerhouse, but the strength stayed in the medium-plus range. 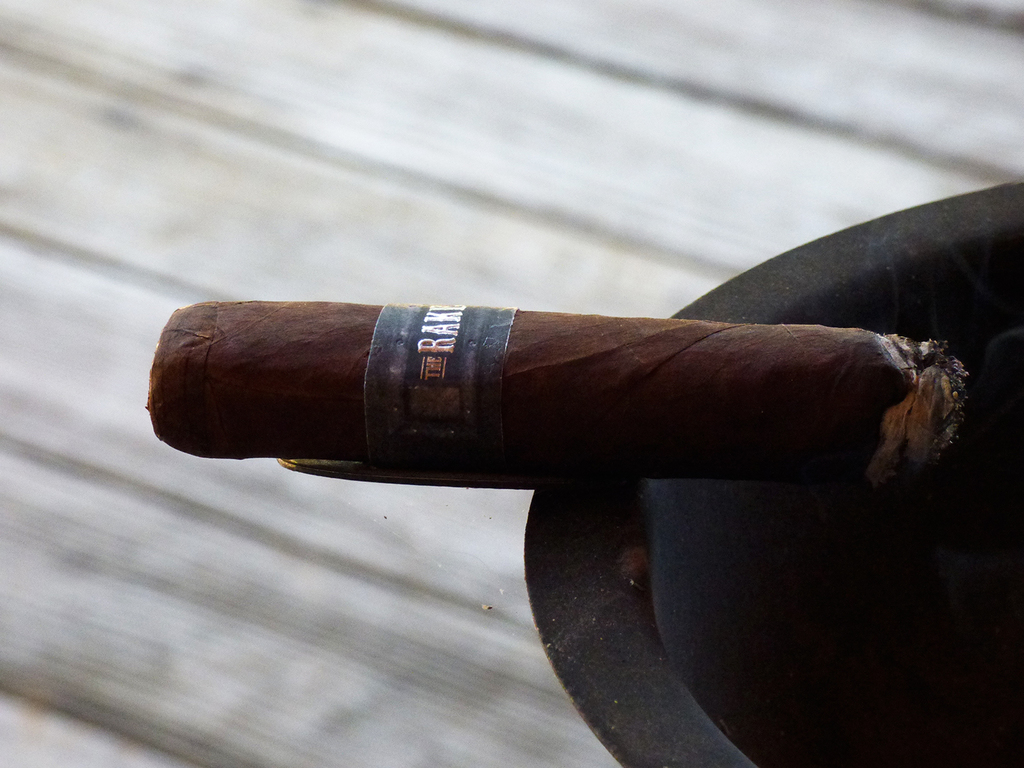 End: The final third saw the jammy dark fruit note die away while the coffee and black pepper took a step forward.  The balance changed, but never got out of whack.  Without the sweet fruity notes things took on a much more earthy vibe that closed the smoking experience out nicely.  It was like having a nice espresso after a good meal.

Final Thoughts: I was really impressed by this cigar.  The balance and complexity grabbed my interest right away and never let go.  There weren't a bunch of major transitions, but the subtle changes in body kept my palate entertained.  To put it simply, this is the best cigar that MoyaRuiz has produced to date.  It has everything that the "modern palate" wants and there is enough nuance and complexity to excite the experienced smoker.  The Rake is a winner! The Rake is a great smoke now and it should age well.  The $10.25 is on the high end, but when you smoke it you won't be worried about the price.  So grab The Rake and fire up Rounders on Netflix!

I see John doing these in his reviews, so I thought I'd do the same.  The Rake is dying to be paired with a nice spicy bourbon.  I would love to pair it with some Booker's Bourbon or maybe Blanton's.  On the flip side, I'd be curious to see how it goes with a nice aged rum like Zacapa or Flor de Cana 12.  The spice from the cigar and the sweetness of the rum should play together nicely.

great review. thanks for letting me know that there is another cigar I need to seek out and try.

one more thing: it's espresso, not expresso (sorry, grammar and spelling, can't help myself).

Thanks Stefan!  good catch on espresso... i HATE when people say eXpresso... and yes, you should give this one a try...

I love expresso, every morning ;-)

I'm looking forward to grabbing a few of these...I like LIGERO!

The review sounds like it...as soon as I get a chance I'm grabbing some!

Thanks Bob!  so, the winnings from SOP that I owe you get bigger with every passing week... they will hit the mail eventually...