Padron is the brand that got me hooked on cigars.  About a year or so after I quit smoking cigarettes, a friend on a business trip handed me a Padron 64, as I was rather bored with a bunch of maniacs drinking heavily and smoking cigarettes around a hotel pool bar.  I remember being hesitant at first, as I did not want to return to cigarettes, but he assured me there was no need to inhale, and the rest is history.  I immediately explored the line, and became hooked on the thousand series, specifically the Natural Londres.  Buying these up, I started noticing the changes that took place over time, and began to appreciate the aging process and benefits of proper storage.   In the maduro line, I have always been a fan of the 6000 Torpedo, and had not had one of the smaller ring gauges in a long time. The Anniversary and Family Reserve lines have always been a staple in my humidors.  A newer BOTL, Chris, sent me this Panetela as a gift, so I figured a review would be in order as my tastes have changed dramatically from when I first starting collecting a few years ago.  My dream would be to tour the Padron factory, as I personally judge construction of all other cigars against Padron and consider them a benchmark of consistency and quality. First Third: The profile was very dry at first, and there was a noticeable strength to the initial draw.  The strength and body was surprising for a 36rg cigar, and the burn on the retro was very strong, similar to cayenne pepper. The tip of my tongue was overwhelmed with the pepper spice, and it was dominating the overall profile as the only note.  The spice began to remind me of the dry spices I buy regularly at the carniceria, like annatto pepper.  The overpowering spice dominated the entire first third and the typical San Andreas flavors I associate with Padron, were nowhere to be found.  Thus far, I would suggest this to someone looking for a full-bodied cigar, or fans of spicy tobacco. 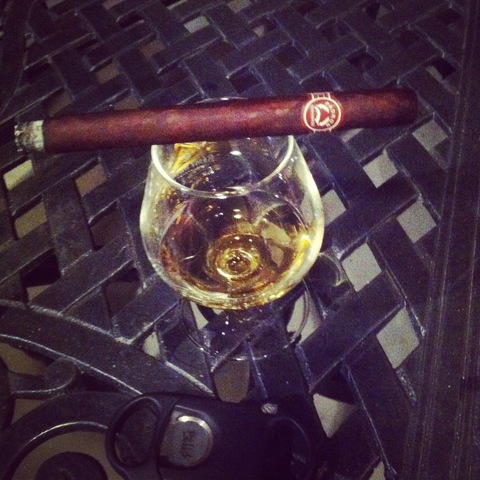 Second Third: Finally, hints of the cocoa I tasted in the dry draw started to show up as I neared the halfway point.  The pepper began to subside a bit, as did the body, and the finish improved.  I grabbed a small glass of Chivas to pair as I felt it needed something at this point to compliment the profile on my palate.  Normally I do not pair with anything other than water, but the strength was too much for my enjoyment without a beverage to compliment the finish on my palate.  The cigar mellowed the closer it got to the final third, which was pleasant for my tastes, and the Chivas helped wash my palate.  I really think a stout or porter would have been ideal. Final Third: This was the best part of the cigar, and the richness of the cocoa and maduro profile really shined.  The retrohale was much smoother, with the cocoa note presenting itself with more cedar and less pepper.  The pepper notes started to come back towards the end, but they came on the tip of my tongue, and did not affect the cocoa notes on the back of my tongue and palate.  Overall, the final third was the most enjoyable third for my tastes.

Construction:  I had to relight it several times, which sucks for lancero type smokes, as they tar quickly and that can affect the overall profile.  Given the price point and difficulty of this roll, it does not surprise me, but it did not tar up or sour flavors, and i would not hesitate to buy more given my past experiences.

Final Thoughts: This is a lot more powerful than first glance suggests. Fans of powerful larger ring gauges will be surprised at the power of the Panetela, and the cigars serves as a prime example of how much flavor may be packed into a small ring gauge. I have smoked hundreds of Londres, Panetela, and Palma in the natural line, so I was a bit surprised to have some burn problems.  I think I prefer the larger ring gauged maduro’s in this series, which is opposite of the natural line for me.  Anyone whom likes spicy cigars, full body smokes, and Nicaraguan cigars in general should try this.  I also know that over time, the spiciness of this vitola will subside, as I aged a fiver a few years ago and was impressed with the results.  Given my tastes for mild-medium stuff, when a cigar is a bit too powerful for me, I may overrate the body more than other reviewers, so take that as you will.  In reality, this is probably medium-to-medium-full for full-bodied fans, so it would serve as a great change-up.  I look forward to reviewing the Natural Londres in the near future.