I have not yet looked at the page that reveals the cigars and their colored dot, so I thought it would be fun to host a simple giveaway. I’ll be giving away a sampler pack that includes 1 of each of the years releases to the person who first correctly identifies, on Cigar Federation or Reddit, all 5 of the release year and the colored dot it is associated with.

No entries with edits will be accepted so please post carefully. The winner and the correct identification will be revealed at some point before the end of September 2013.

C4ddy took the 2008, 2009, 2010, 2011 and 2012 vitolas and mixed them up without me seeing. He then tagged each of them with a colored dot so that we could easily reference them later. He wrote the corresponding year to dot relationship down and then handed the cigars back to me in a 3 cigar and 2 cigar configuration. I was to smoke the first batch of three in one sitting and the second batch of two cigars in another setting. 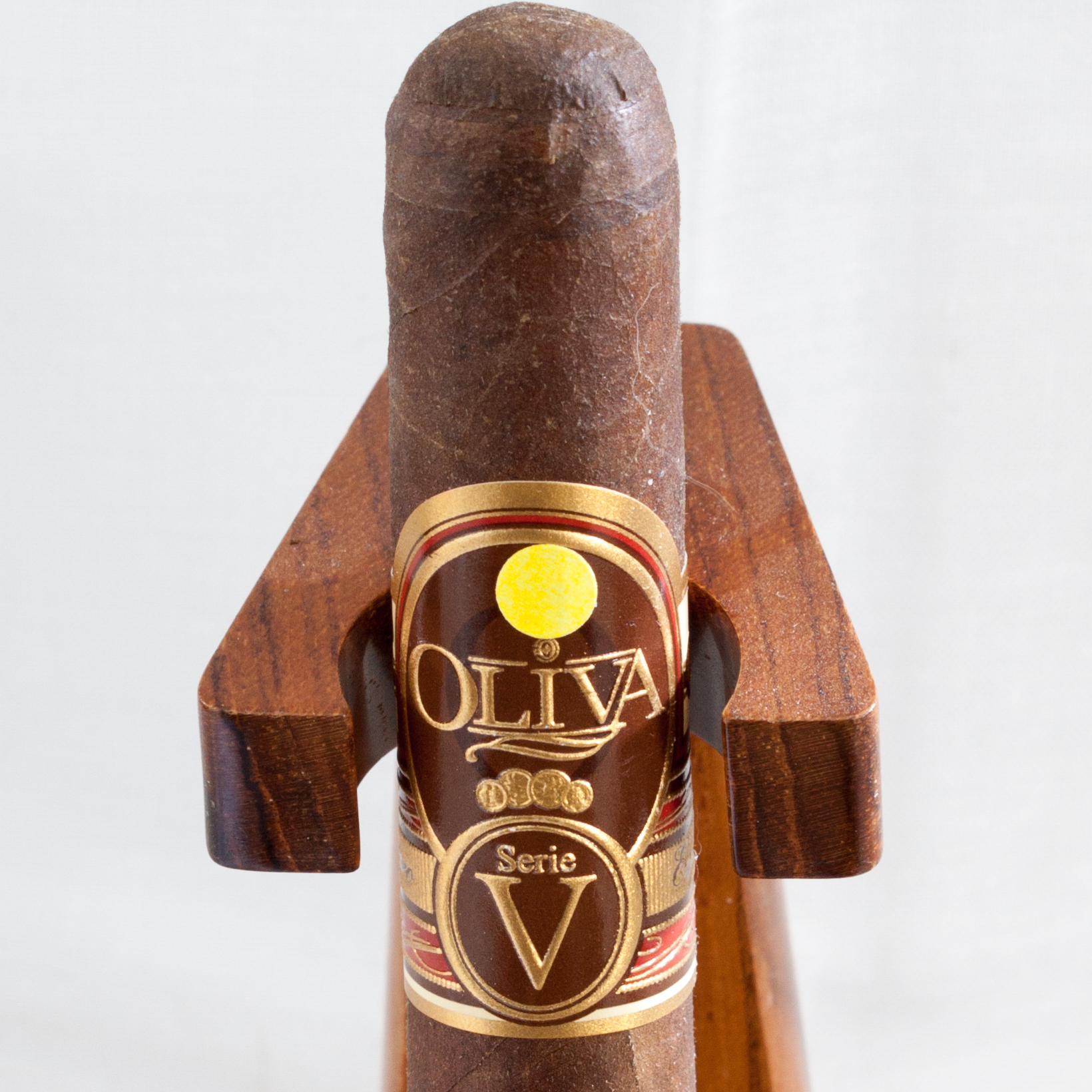 Be the first correct poster, on Cigar Federation or Reddit, to identify the correct Oliva Serie V Maduro with it's dot and I will send a 5 pack that includes every year of release.  Contest will end September 30th, no Reddit posts with edits will be accepted.

I will post my guesses on Wednesday (I still have not looked at the master sheet).

Hardly any nose to this at all. The only thing I could possibly comment on is barely perceptible cedar. Quite underwhelming.

Spices and black pepper with cedar. This blows the yellow dot away in terms of nose complexity.

C4ddy obviously set this up so that the vitolas of the release wouldn’t be an obvious give away while smoking them together.

Both are toro vitolas which will narrow this review down with some simple use of Google. Since the years that use the toro vitola have the exact ring gauge, it won’t be much help to you at all.

Both cigars are flawless in their construction, with the yellow dot having a darker wrapper than the red dot.

There is some nice pepper and sweetness present here. The pepper is not overpowering and lingers at the back of my throat. I get some leather and earth mixed with spice on the retrohale but otherwise the three flavors are quite sedate. I start to get some dried cedar at around the 10 minute mark.

Much more savory than the yellow dot but with much less intensity on the pepper. I feel like I get much more flavor with each draw. The spice and pepper that is present just plays at the back of my throat each time. There is cedar and other dried woods coming through at about the 10 minute mark. The red dot is markedly more complex than the yellow dot.

I get some hay as the first closes out.

The clear winner for the first third is the red dot Oliva Serie V Maduro.

More of the same flavors going into the middle. The cedar picks up a bit in intensity and the earth that was only present in the retrohale breaks through. There is some savory flavor that shows up as the middle third establishes itself, though not as complex as the first third of the red dot.

The earth and leather present on the retrohale become quite intense at the halfway point. Very strong.

Still quite spicy and woody going into the middle third. The intensity of the savory flavors has not fallen. There’s no new flavors that are introduced initially here, but it is still excellent.

At the half way point of the middle third there’s some leather and light earth present as an after draw taste. Approximately 10 minutes after that the intensity of the leather and earth becomes quite light.

Some spice enters the flavor map in the last third but the leather is overpowering almost every other flavor here. There is still lots of dried wood and earth.

The first two thirds of this cigar were far more enjoyable than the last third for me.

The leather and earth that dropped off comes back again as I move into the last third. There’s a very heavy wood after taste here mostly oak.

Both cigars burned quite evenly. Total smoking time was a leisurely 2 hours and 52 minutes. Smoking two cigars simultaneously turned out to be much easier to manage than tree.

The draw on the yellow dot was extremely tight. I ended up making a second v-cut and it opened up to where it should be.

The draw on the red dot was just right from the start.

Oliva has managed to keep the pricing consistent after 5 years of releasing the Serie V Maduros. It wasn’t until 2012 that the line saw a meager price bump of 5%, although I didn’t see this reflected at most of the B&Ms I checked for stock. Singles of any release year was almost exactly $9.45. The limited production runs came in boxes of 10 and depending on where you were in the release cycle ranged from about $85-$95.

Even at the top end of the pricing this is a remarkably good value. Most premium cigars and especially limited release cigars will push over the $10 a stick price point.

There’s no comparison here between the red dot and the yellow dot. Ranking all 5 of the Oliva Serie V Maduros this would come in 3rd or 4th overall.

The red dot is the clear winner here. It was more more complex from start to finish and never left me wanting for more flavors. If I had to rank it against the other 4, this would come in number 2 for me.

Okay, if you take my comment from part 1 and add this, you have my guesses. :)

For ease of looking, these were my guesses from Part 1:

Interesting review.  I was recently offered a box of 2010 Oliva V Maduro for $175...it's tempting but $17 a stick is a bit high even for a cigar that's aged four years.

Some people love the Serie V Maduro and would say the $17/stick is worth it.  I've had mixed results as it appears John did as well.

That's odd FireRunner.  I was able to pick up all of the previous release year boxes for the list prices at $85-$95.  I would definitely shop around.