I know I talk about marketing a lot, but you can't blame me. I have my MBA in marketing and have spent about half of my career in corporate marketing.

Espinosa Cigars recently announced the LE 601 La Bomba Warhead, which was scheduled to be released to IPCPR 2013.

In the Espinosa booth, to kick off the launch, they took the shell of what looks like a bomb and decorated it look like the packaging of the Warhead. I thought it was genius and I think others did as well. There was at least one attempt, by an undisclosed party, who walked off with the bomb.

Great work to whoever came up with this at Espinosa! 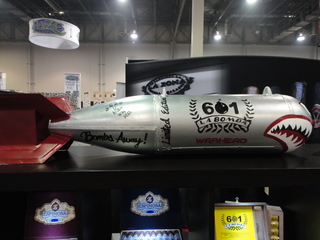 I thought the best part was that they asked all veterans at IPCPR to sign the warhead and then gave it away to a lucky winner at the end - that's what put it over the edge for me!

Crap. I didn't even know about that. The story gets even better.