One of the releases I was ecstatic for at the IPCPR 2015 in New Orleans was the Caleanoch. The cigar uses an evolution of fire curing by incorporating a percentage of peat fire cured tobacco in the filler. The number represents the percentage of peat cured filler tobacco in the cigar. The initial release is the Caleanoch 25, with the 50 and 75 to follow in the Spring of 2016.

Available in a 12 count Toro (6x50) vitola, packaged in Scottish tartan colored aluminum tubes. The initial releases do not have any bands on them.

Check out our IPCPR 2015 interview with Eric Hanson here:

“The Caleanoch 25 is absolutely an innovative product, combining the character of a classic Connecticut Shade cigar with the body of a subtly peated Islay scotch whisky. “ 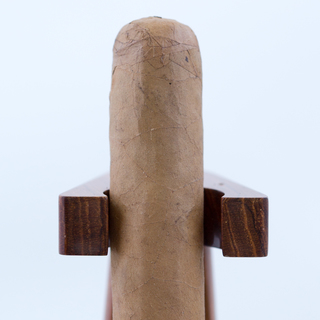 The sweet and rich peat is readily apparently on the wrapper along with some hay. The foot is quite sweet with hints of spices.

The draw on the Caleanoch is in the ideal zone.

My initial impressions are a lot of sweetness with some grassy notes and hay post draw. There are some light spices and more sweetness on the retrohale. Out of nowhere I start to get a blast of medium plus pepper on the post draw. You don’t get it immediately, instead it hits you about 10 or 15 seconds later. There is some saltiness reminiscent of an Islay scotch that comes into the mix.

The pepper does start to follow off with the grass and hay post draw starting to take over on the post draw. The retrohale migrates to creamy sweet with the spices falling off completely, and the pepper falling to light plus.

At the 25 minute mark I start to pick up some smokiness, at a light level, which I thought would be so up front. I’m also getting a significant dry mouthfeel.

In the middle third there’s a sudden amount of vanilla sweetness coming in at a light plus level. Halfway through the middle third the peat smoke starts to make an appearance but it is very subdued and balanced with the rest of the flavor profile. The middle third finishes with an abundance of creaminess with a hint of smoke. As the Caleanoch 25 moves to the last third, the retrohale is actually more subdued than the draw with the hay coming through more and still a hint of pepper.

The profile doesn’t undergo any major adjustments with more of the creaminess, hints of smoke, with more peat smoke on the retrohale and some saltiness. The peat ramps up as the first third winds down and brings some earthiness with it.

I’ve said it on previous Sharing Our Pairings shows, but it bears repeating. I love to see companies who are not afraid to innovate in the cigar market and come out with unique and interesting products. The Caleanoch 25 is absolutely an innovative product, combining the character of a classic Connecticut Shade cigar with the body of a subtly peated Islay scotch whisky.

After a second smoking session during Sharing Our Pairings, I would rate these as an 88 or 89 AKA "5 Pack" when paired.

I’m looking forward to experimenting with pairings. I’m also eager to try the Caleanoch 50 and 75 to see how the profile is impacted with a greater percentage of peat-cured tobacco.

The obvious choice here would be a lightly peated Islay whisky. Based on a previous Sharing Our Pairing show where we paired IPAs with Fire Cured cigars, I think it would be interesting to try a few IPAs here as well.

Interesting...I'm not a huge fire-cured fan but the different % of fire cured tobacco makes it sound more worthy of a shot...I wouldn't be grabbing a 75% but more of a subtle 25%.