Ezra Zion Cigar Company announced the All My EX’s, in collaboration with Noel Rojas’ Aromas de Jalapa factory. It is released in 3 available vitolas. The Robusto (5”x50), Toro (6”x52) and a Lancero (7”x42).

We had the opportunity to smoke the Robusto on a dirty palate at the IPCPR 2015 in New Orleans, and I was excited to revisit it under fresh conditions.

Here’s an interview with Kyle Hoover at IPCPR 2015 in New Orleans: 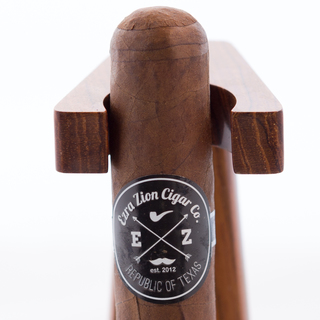 “Obviously a fresh palate does wonders as the All my EX’s cigar really shines for me.”

“Overall, this is one of my favorite Ezra Zion offerings.”

The nose on the All my EX’s is intense barnyard and dry hay. There are some light spices buried in there but the barnyard almost completely overwhelms it.

I used a v-cut and found the draw to be perfect.

My initial taste impressions are sweet caramel, almost a crème brulee off of the first few puffs. There are some spices on the retrohale but also a sweetness and a mouthfeel almost liked whipped cream. I actually found it hard to put down because I wanted to keep puffing away. Halfway through the first third there are some citrus notes. I also get some rich barbeque notes on the retrohale as the cigar moves to the middle third.

The middle third starts out with toasted cedar. The retrohale still has a solid medium strength spice with light sweetness as well. The citrus carries into the middle third at the same strength. The cigar is definitely hitting a medium plus level in strength at this point. As the middle third closes out I pick up some light earth.

The cigar is a bit creamier going into the last third, but the spice is still present and rich to round out each draw. As the cigar starts to close out it becomes earthy spice.

I smoked the All my EX’s at the IPCPR 2015 and thought it was good, but not great. Obviously a fresh palate does wonders as the All my EX’s cigar really shines for me. It’s rich and spicy from start to finish with accents of citrus.

I absolutely want to try this out in the other vitolas, especially the lancero.

You want something to offset the spices but not run over the flavor nuances. Rum, root beer, rum cocktails, coffee, or a nice ale would all be good choices here.

The All My Ex's Robusto is a nice milk chocolate wrapper with only one visible vein that seemingly runs the entire way down the cigar.  The band is very plain - like very plain, but I don't buy cigars for their band.  I do like the the Ezra Zion guys put their Twitter handle on the band - good way to expand your social media presence.  The cigar itself feels very dry and rough and a bit hard.  I clip the cap with a table cutter and take some cold draws that reveal grass with maybe a bit of chocolate and a bit of spice in the back of the throat.

The first draw is smooth and flavorful with some earth and leather, but I'm quickly bombarded with red pepper on the front of the tongue and all the way through the nose and finish. The spice is really the story for me through the first half inch with the earth and leather being background players and a subtle dried fruit note that is fleeting.  The draw is fantastic on this giving off heaps of smoke, and the construction is solid as I've got a poker straight burn with about an inch of ash holding on.  The pepper is still dominant, but not overpowering and we've got a nice dried fruit flavor that is mingling with the earth.  I'd say we're in a medium-full/almost full-bodied territory with this cigar.

The flavors remain consistent into the middle. The pepper is the main player permeating through each draw especially through the nose, but we've got a nice earthy/leathery base with some sweet fruit notes sprinkled in for good measure.  As I enter the 2nd half of this cigar, I think the draw is opening up a bit more, but I enjoy a wide open draw so its not a negative.  Flavors are consistent throughout so far.  I'd probably say this has fallen into the medium-full arena, but at no point do I feel overwhelmed by the nicotine.

I'm now entering the finale and the flavors are remaining consistent, but the pepper is not nearly as overwhelming or dominant as earlier - its really just consistent.  I'm getting a really unique BBQ Chicken flavor in the end here which is something I've never picked up before. The cigar is starting to burn a little hot and I'm getting a bit of a metallic taste so I pitch it. Overall, this is one of my favorite Ezra Zion offerings.  I don't think its fantastic, but its solid.  I'd really like to try the Lancero version of the cigar, though it might be too strong give me experience with this Robusto.  This is a cigar I'd like to keep a couple of in my humidor for the right time!

People have been going nuts over this cigar...I thought the average would break the 90 mark but Matt isn't a big spice guy..Great review guys!

The bigger problem is not that Matt isn't a big spice guy as I actually am, but that an 86 is a really good score for me.  If you look at things I reviewed, few cigars get 90+ and good cigars that I enjoy get low 80s.  That's just a personal thing.  This is why I find scores attached to reviews to be superficial - the more important aspect is the content and the opinion and less the score.

Oh I know..I've read every one of your reviews over the last 2-3 years...I know 86 is good but I have been hearing this cigar blowing peoples minds lately. Thought this one would break the 90 mark.

I can almost guarantee that if anyone else on the panel reviewed this instead of me, it would have likely gotten a 90+.  I know Jerad absolutely loves this cigar.

Comment by Stefan Lindblad on September 8, 2015 at 4:33pm
It's like grade inflation in schools. There was a time when a B really did mean good and an A really did mean excellent. Not the case any more...

Honestly, I don't even pay attention to the scores here.  I look at how each person describes the experience.  If they enjoy the cigar, the description will be more intensive.  You can feel the excitement through the words used and that is how I know if they would recommend it.

These are pretty good, at least the one I've smoked so far was.  I'm trying to spread some of my new stuff out, and also see if they smoke different after a month or three.  :)

Comment by Ky70 on September 8, 2015 at 8:10pm
The robsuto was my least favorite vitola...I didn't get much from it. I love the toro and really enjoy the Lancero