Jericho Hill is the first full production release from Crowned Heads to be produced by My Father Cigars.  My Father also produced a limited run of the Las Calaveras for Crowned Heads earlier this year.  All of the previous cigars released by Crowned Heads were produced in the DR by Ernesto Perez Carillo including the Angel's Anvil which was released a few months ago.

As with many of the Crowned Heads releases, Jericho Hill has a story that is rooted in music.  The name is derived from Johnny Cash's rendition of "Cocaine Blues" featured on the live album "At Folsom Prison" which was released in 1968.  In the song, Willy Lee is caught by the sheriff from Jericho Hill.  Leave it up to Jon Huber and Mike Conder to come up with something like that.

Jericho Hill was recently released at ICPRP 2014 and will hit store shelves in early August.  It is available in four vitolas. 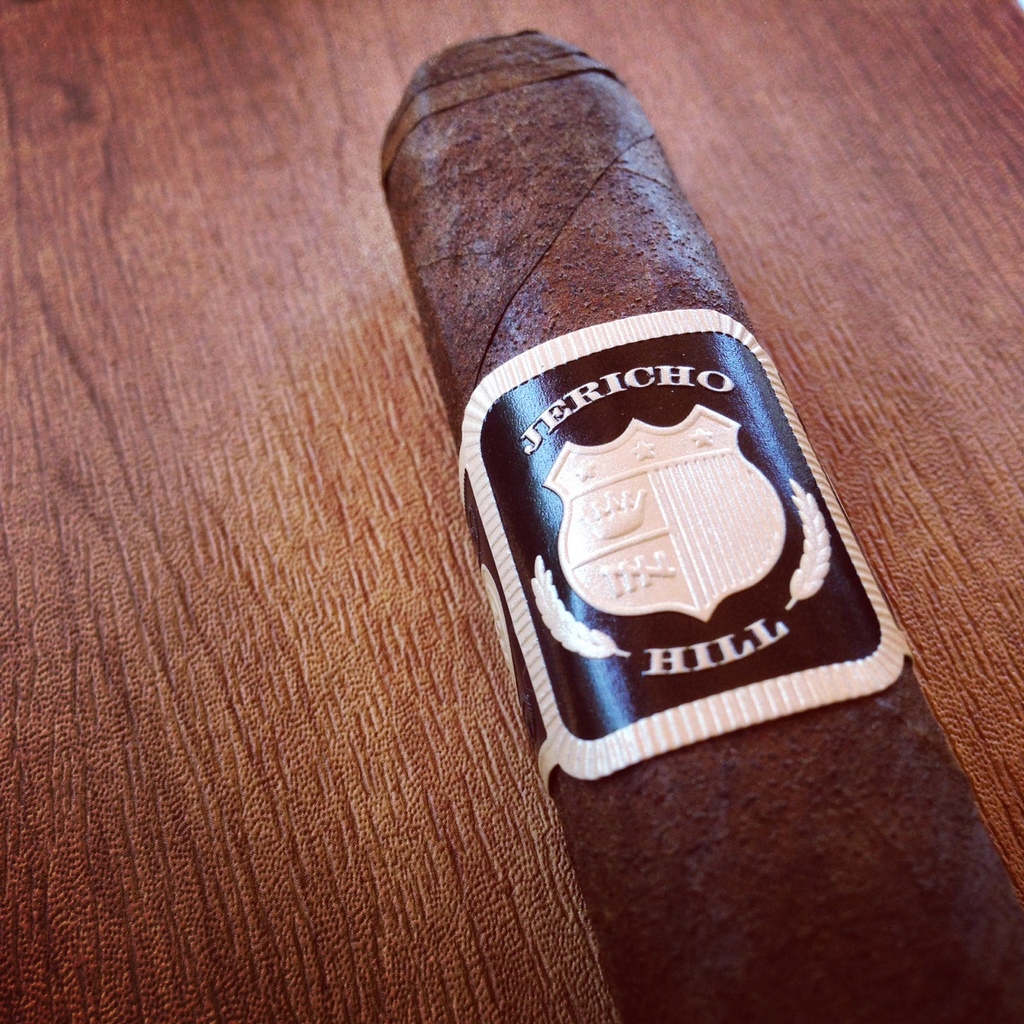 Quick Note: For this review we used the CigarFederation rating system. You can view it in detail here. 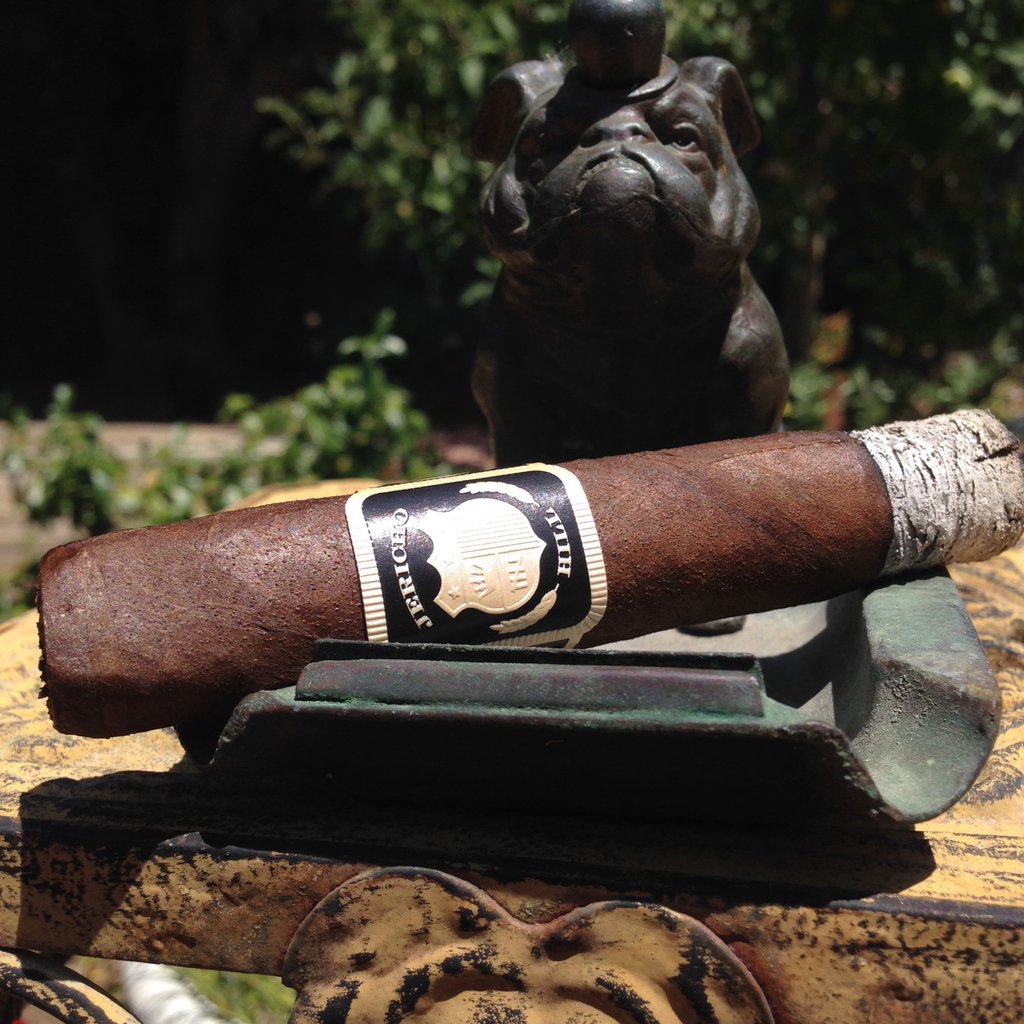 The Jericho Hill from Crowned Heads was at the top of my "Must Sample" list for ICPRP this year.  While I wasn't too enamored with Las Calaveras (Crowned Heads first release from the My Father Factory) I still had high hopes for this one.

The look of Jericho Hill is very cool.  The black and ivory band is eye-catching while the San Andres wrapper is dark and rugged.  When I prepared to fire up the JH, I took a whiff of the wrapper and was overwhelmed with smokey notes of earth and black pepper.  I thought for sure I was in for a high powered, peppery cigar.  I was wrong.

Flavor:  The Jericho Hill started off with an exceptionally smooth flavor profile.  Notes of molasses and almonds were present initially, but this quickly changed.  At 1/2 inch mark, the Jericho Hill took on the characteristics of a chocolate souffle in both flavor and texture.  The flavors were sweet and dry (cocoa powder) and did not have a heavy mouthfeel.  There was a fruity brightness on the finish that I couldn't quite put my finger on.  I want to call it a dried cherry, but it was a bit more tangy than that.  Either way, it was a nice component to the flavor.  There was a little spice on the retro that built as I progressed, but it was not as strong as I would normally expect from Pepin.

Strength: The Jericho Hill started out as a medium strength cigar and progressed to a medium-plus.  The balance of flavor and strength was perfect.

Recommendation:  No matter how you slice it, the Jericho Hill is a damn good cigar.  It was a departure from the norm for both Crowned Heads and My Father.  The profile was unique and the aroma was awesome.  The balance of flavors was outstanding.  Basically I could smoke the Jericho Hill all day, every day.  I cannot wait to pair it with some Flor de Cana or Ron Zacapa.  I feel like the sweetness of the profile will play very nicely with some rum.  Basically, it's another winner from Crowned Heads.  I love their cigars, but I also hold Jon and Mike to a very high standard and somehow they keep exceeding my expectations. 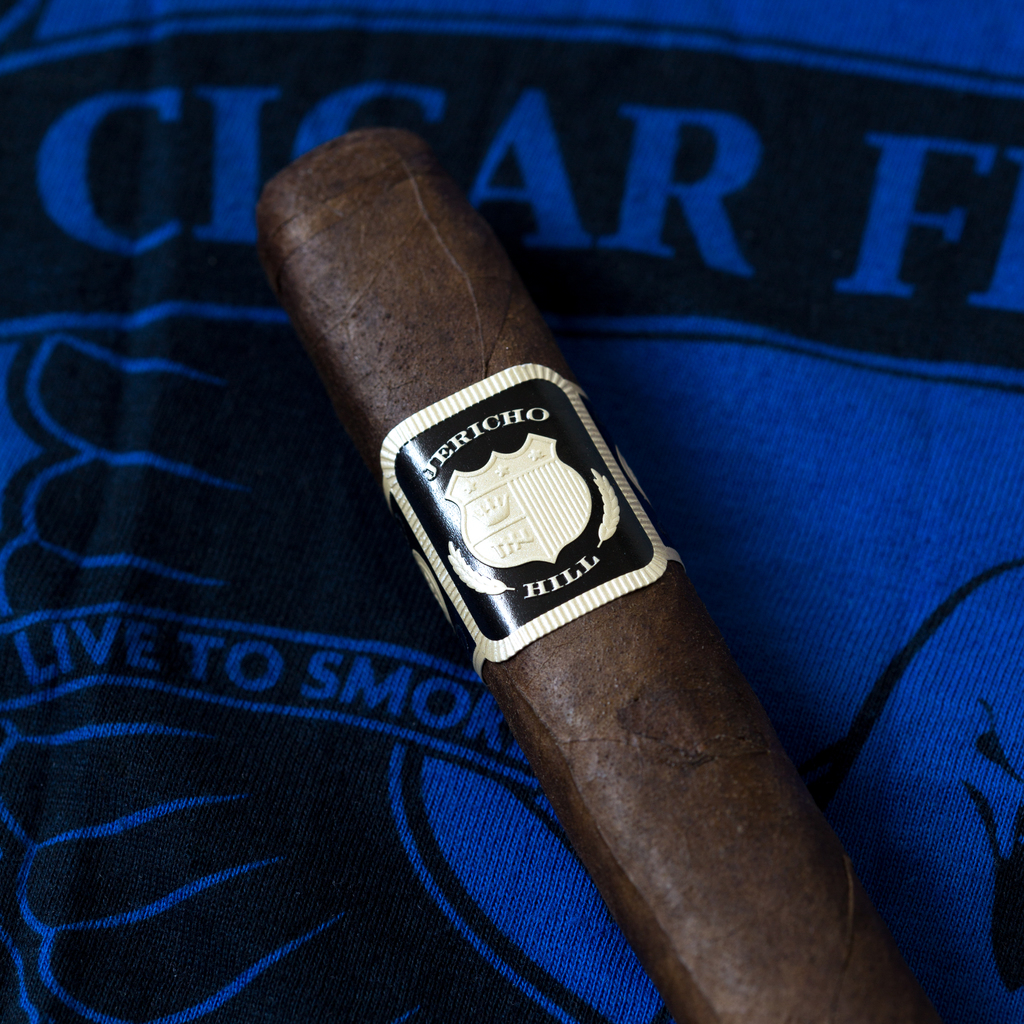 The nose on the Jericho Hill was a mixture of black pepper, some indeterminate baking spices and barnyard.

On the cold draw I was able to pick up lots of sweetness with just some slight hay at the end.

The first third started out with equal parts pepper, and the sweetness on the cold draw.  There was almost a potting soil finish that I couldn’t quite identify.  It was a really interesting flavor combination to start.   After the first third establishes itself the sweetness moves forward to finish on the tip of my tongue.  Finally there some dried wood going into the second third.

The middle third was almost a beef jerky with the dried wood and the sweetness still present.  The dried wood ends up being the dominant flavor by the end.

In the last third the dried wood is still carrying through but adds an earthy finish.

This is a really smooth medium bodied cigar.  Although the flavors aren’t extremely complex, it is delicious in spades.   This is a no brainer box split for me. 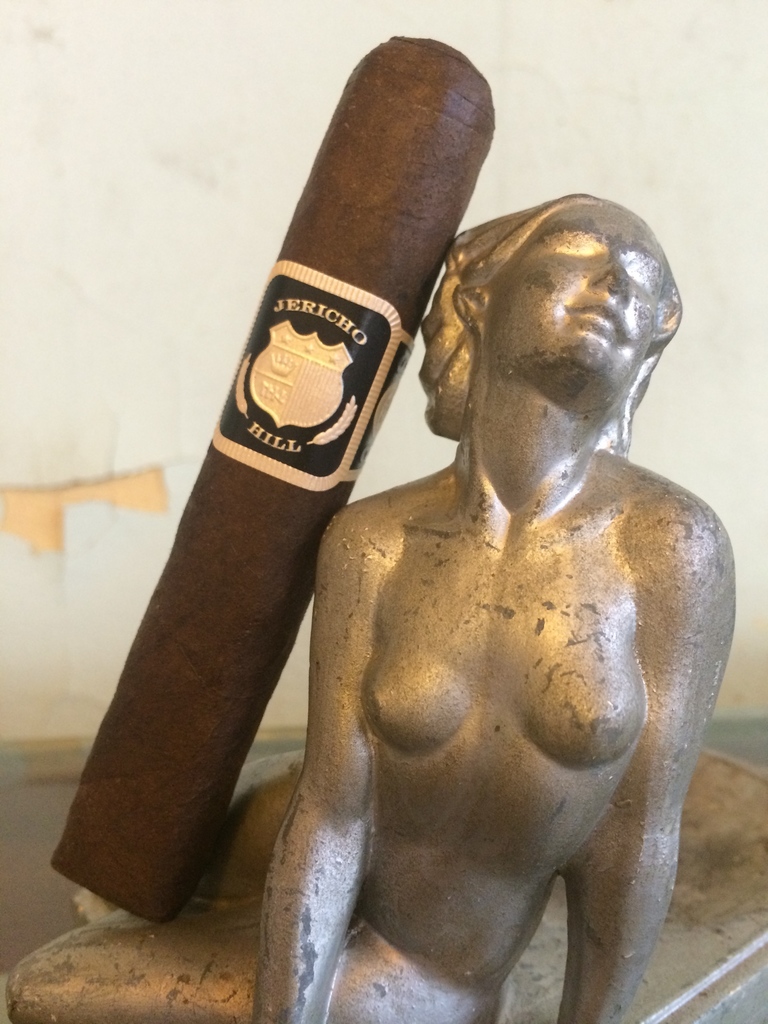 The new Jericho Hill by Crowned Heads? That’s pretty much a #BuyNow for me! But seriously, I am a big CH fan and am excited to see how this new addition stacks up to the existing line.

Strictly based on appearance, the Jericho Hill is great looking specimen. The black and ivory/gold, embossed band is quite elegant against the toothy, dark brown wrapper. And the construction looks flawless. The prelight has a strong, pleasant aroma of earthy sweet tobacco. And the cold draw has lots of cedar and earthy tobacco notes, with a nice little spice.

The first puffs of the Jericho Hill start off with a blast of full bodied flavors. Mainly, there is a deep, woody/cedar note, with these awesome sweet finishes of molasses. Add to that a respectable amount of smoke and a great burn, and I am loving where this cigar is going.

The second third really ramps up on the sweetness, which has now become more of a honey flavor, still with the cedar and spice after notes. The retrohale also ramps up with spice and it really wakes me up.

The final third of the Jericho switches it up yet again and becomes very woody and just a little bit drier. The sweetness starts to fade out as I near the end, leaving  a woody and earthy note. The smoke is still thick as ever, and I have yet to have ANY need to relight or touch up at any point.

This cigar is easily worth a box split and may actually become a box buy.  For me, this is another winner from Crowned Heads.

I've not been a big fan of the Crowned Heads offerings in the past as I've made pretty clear on this site, so I wasn't going to take part in this Group Review, but after stumbling upon a Jericho Hill and lighting it up, I felt compelled to include my thoughts.

The wrapper is a beautifully constructed dark brown with minimal veins and seams. The band is elegant, yet understated and reminds me a bit of the Headley Grange band. As I clip the cap and take a prelight draw, I'm met with a fruity sweetness that I find extremely pleasing.

Immediately upon lighting up, I can tell this is a departure from the other Crowned Heads blends I've smoked, and I can taste the "Pepin factor" at play. I get lots of pepper early with a bit of that sweetness on the finish. As I get past the first three quarters of an inch, a woody earthiness is introduced. In the middle, the woody earthiness is the prominent flavor with a sweet, musky spice on the finish. I really enjoy the finish of this. The flavors continue pretty constantly through to the nub.

I'm semi-surprised at the strength of this cigar - I'd consider it solidly medium. Draw was perfect and the burn was impeccable! I'm not going to claim that I'm going to go buy a box of these, but its immediately my favorite Crowned Heads blend to date and one that I will definitely smoke again.

This sounds so much better than Las Calaveras, which was good but not great.

It's you favorite Crowned Heads at an 88?

Charlie - I think an 88 is the second highest score Matt has ever given... like ever...

I think the score means very little.  If you don't have the context for how I have scored other cigars in the past, you see 88 and think I don't like it.  That's not the case at all.  I just find very few cigars that I would buy a box of - very, very few.  And with the wealth of wonderful cigars on the market, a cigar has to be pretty special for me to even commit to a 5 pack.  In that context, an 88 is actually a fairly high score for me.  Outside of a 96 or 97 for the HE Lancero (which I loved), I can't think of more than a handful of cigars this year that I would have scored higher.

So, yes...if I were to rank the CH cigars, the Jericho Hill would be one, Four Kicks would be 2 (because I liked the Corona Gorda), Headley Grange Drumstick, Mule Kick, Headley Grange, JD Howard Reserve would be the order I'd place them in.

Nice reviews by all here! I'm interested in trying this one out. I'm also happy to see another regular production cigar from Crowned Heads. Limited editions and annual releases are fun to try, but finding a great regular production stick always makes me very happy.

I hear ya, I don't pay any attention to "numbers" (unless they are mine). Every cigar that I personally give 90 or higher are regular smokes for me, cigars I return to on a regular basis. I am not a box buyer either unless I get a killer deal on Cohiba's, Liga Privada's(DR/L40), and a few other CC's. Those cigars are always 90+ smokes.

Another way to look at it - my Top Cigars of 2013 included at least one cigar that wouldn't have even scored a 90 on our list.