One of the booths we really enjoy going to every IPCPR is the General Cigar booth. Everything is organized and we can go from interview to interview seamlessly. One of the great people we get to talk to is Ricky Rodriguez. Ricky has been working on this cigar for 5 years so this was a much anticipated release.

Check out this interview with Ricky Rodriguez. He talks about the Pilon at the 3:00 mark. “The CAO Pilon is extremely enjoyable, and I’m a big fan of the release in a Corona vitola.“

“I think this is a good late morning cigar that I'll enjoy smoking again with some coffee while sitting on my deck.”

The nose on the CAO Pilon is spicy molasses, cedar, some moss. Lots of pepper and molasses on the wrapper.

I used a v-cutter and found the draw to be tight.

Creamy. sweet. and woody to open up the first draw. The retrohale is light and creamy with a slight lingering pepper after. There’s almost a smoky undercurrent to each draw which reminds me of a complex campfire smoke, or really faint peat. As the first third settles in there’s a bright vegetal note. I mentioned the draw was tight, but I had no draw issues and the burn is razor sharp. Twenty minutes in a nice rich spice develops on the retrohale at a medium minus strength level. The first third wraps up with a spice and wood combination.

The smoke in the middle third is creamy and finishes with a dry woody flavor. The retrohale is sweet, woody and spicy. As the middle third settles in there’s a rich meaty savoriness. Each draw is still finishing with that dry wood flavor. At the halfway mark there’s a sweet, almost fruity note.

The CAO Pilon is still creamy in the last third, with the spice falling off. The retrohale is slightly spicy, some wood, with the sweetness that was previously present being quite subdued.

The CAO Pilon is extremely enjoyable, and I’m a big fan of the release in a Corona vitola. Pretty easy box split choice here.

The CAO Pilon would go with a wide variety of soda pop, bourbon and some light to sherried whiskies.

I really like the branding on this. There is a lot going on with the band, but its still organized and sharp looking.  The band is white with different brown shades on it detailing the brand 'CAO', the blend 'Pilon', the vitola 'Lote Pequeno' as well as things ike size, blend information, and Rick Rodriguez' name.  On the back is some artwork on a pilon.  Its really a cool band that includes a lot of information that I wish more manufacturers included on the band - its good stuff to know for a cigar junkie.  The cigar itself appears to be a flawless deep milk-chocolate with minimal veins.  Chocolate and earth are the aromas off the foot. I clip the cap and take some cold draws that have a little cocoa, but also some woody earthiness.

I light the cigar and any chocolate I thought I might get from the pre-light inspection is gone, and I get a lot of woody flavors with very subtle hints of spice on the retro. This is a bit lighter than I prefer typically, but I'm smoking this first thing in the morning with some coffee and really digging it.  The draw has a bit more resistance than I like, and I notice that the cigar looks a bit overfilled, but, while the smoke output isn't great, its not hurting the experience.

As I enter the middle, the power has ramped up a bit, but its still firmly in the medium range.  The pepper flavor permeates from the front of the tongue through the retrohale.  The ash held firm for over an inch and a half, and just as I went to take a picture of it, the ash fell off.  The draw has opened now and is now giving off copious amounts of smoke. The flavors in the middle have been pretty consistent, and I'm not loving this cigar as much as I was off the light, but I'm still enjoying it. The ash is, again, holding on very well as I've got another inch of ash on this cigar.

In the final third, I'm getting more of the same flavors as the middle. Wood is probably the dominant flavor with a spice and strength that hovers on top.  There is a slight sweetness that lingers subtly.  Burn and draw remain perfect. 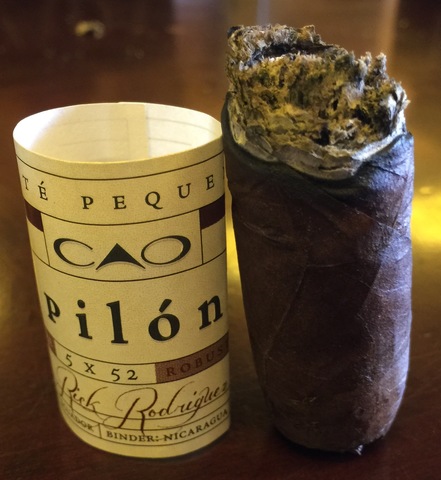 This is a good cigar, but not great.  It started off amazingly, and I got really excited off the light, but it peaked a bit too early for my liking.  I think this is a good late morning cigar that I'll enjoy smoking again with some coffee while sitting on my deck.  I'll keep a couple in the humidor

Great review guys...I'm going to smoke my first Pilon Corona this week. I can tell you one thing...these cigars have been flying off my local shops shelf like no other cigar in the humidor...