“Even if the Córdoba & Morales Clave Cubana Etiqueta Blanca wasn’t a limited production run, I would tell you that it is absolutely worthy of an immediate 5 pack purchase”

The nose on the Etiqueta Blanca is primarily dominated by the rich and toothy San Andreas wrapper. Cedar, barnyard and very strong fermented tobacco.

The first third opens up with sweet cedar and a light white pepper chaser. On the retro-hale I get a really smooth and clean amount of spice.

There’s a transition into the second third of very dominant earth. Some leather starts to break through on the post draw. All of the sweet cedar combination from the first third is completely absent here.

Once the middle establishes itself, the full bodied earth flavor falls off to just under the medium level, taking the leather with it.

The spices and savoriness that I enjoy so much in the first third comes through as the medium third winds down.

In the last third, along with the notes from the end of the second third, I get a very full bodied amount of spice on the retro-hale. It’s quite tasty but full almost to the point of overpowering.

Even if the Córdoba & Morales Clave Cubana Etiqueta Blanca wasn’t a limited production run, I would tell you that it is absolutely worthy of an immediate 5 pack purchase. In the review I didn’t talk about the box presentation, and I think that’s something that doesn’t get enough attention in reviews. The box design is a classy white with gold lettering and gold clasp.

If you enjoy your cigars spicy and on the fuller end of the spectrum, the Clave Cubana Etiqueta Blanca will be right in your wheel house.

This brand is so appealing to me, Never had one and I this is one I have been seeking out (Córdoba & Morales) not just this stick. I watched them on CO last year and they are still on my list to try. Can't find them locally at all, and all I have heard are good things about them.......my quest continues.

Cigar Hustler carries them, I think this smoke would be on the top of C&M list for me...

I'm probably gonna smoke this one during CigarChat tonight!  We've got Cordoba & Morales joining the show, so come check it out! http://cigarfederation.com/page/cigar-chat 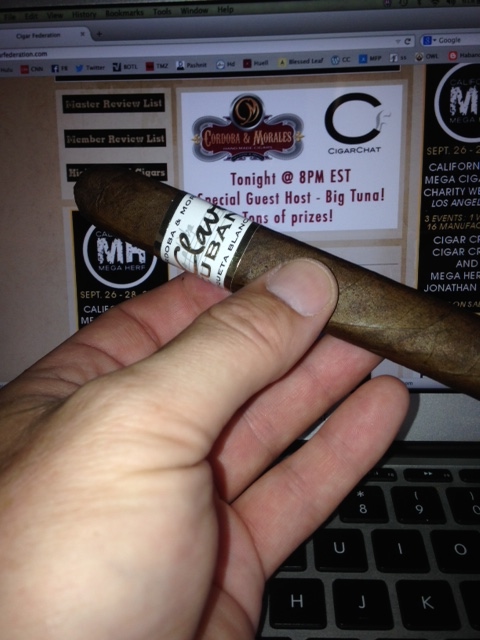 The Córdoba & Morales Clave Cubana Etiqueta Blanca is a spectacular cigar. This size is on the border of sizes I enjoy.
http://lacasadelhabano-brussels.be