The differences in the way that cigars and cigarettes are made tells you a lot about the goal of the end product. For example, tobacco companies add ammonia to cigarettes while cigar manufacturers try to remove it. Why?

Cigarette manufacturers add ammonia to cigarettes to increase the absorption of the nicotine into the bloodstream, increasing the impact and the likelihood of addition. It is exactly the same process that is used to enhance the absorption of cocaine in the freebasing process. Think “Freebasing Cocaine.” In actuality, when you smoke a cigarette you are, in effect, freebasing nicotine courtesy of the tobacco companies.

Alternatively, in the making of a premium cigar, ammonia is considered a bad thing and one of the specific purposes of an extended fermentation process is to remove as much of the ammonia from the tobacco as possible. Depending on the company and the tobacco this is a process that can take upwards of three years but, the more completely that tobacco is fermented the less ammonia you have in the tobacco and the resulting cigar. Because the ammonia, a critical component in the freebasing process is gone the amount of nicotine that is absorbed when smoking is reduced.

Panacea Cigars are noted for a full and complex flavor in a mild to medium body cigar. It is a tribute to the extended aging and fermentation of its tobacco and one reason why smoking a Panacea is an aesthetic experience, like drinking a fine wine and not like smoking a cigarette at all.

This is an excellent video on the aging and fermentation processes 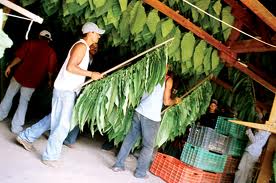 . Enjoy it with a good cigar, preferably a Panacea!