Without further adieu, I unveil #6 on our list - please check back Monday for #5. 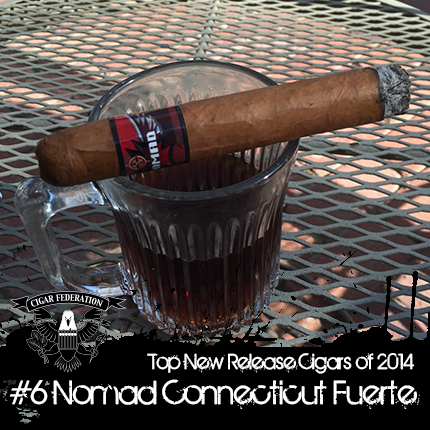 Fred Rewey's Nomad Cigar Company marks the first (and only?) manufacturer to score two entries on this year's Top New Releases list as our #6 entry, the Nomad Connecticut Fuerte, joins #9 Nomad C-276 on our list.  Marketed as "not your father's Connecticut", the Connecticut Fuerte is the result of a two year blending journey that Rewey admits was incredibly taxing on him personally and professionally.

Blended in the Dominican Republic, the Nomad Connecticut Fuerte set out to be a "different" Connecticut experience providing more flavors.  Rewey achieves this with a selection of fillers from Dominican Republic and Nicaragua along with an Ecuadorian Habano binder, all wrapped in Ecuadorian Connecticut leaf.  The cigar debuted with four sizes: Corona, Toro, Robusto, and Robusto Gordo, but has since added a Belicoso.

"Smooth and creamy. The usual cedar, toasted marshmallow and some graham cracker. With just a little bit of spice and enough body to keep it enjoyable."

"The cigar was light and smooth, creamy with definition on the tongue and enough steam to awaken the sense."

"The Nomad will now become a regular part of my Connecticut rotation."

"The Nomad...surprised me greatly, and will be in my rotation."

You can read Dustin's Coffee and Cigar Pairings post that covers the Nomad Connecticut Fuerte here.
You can watch our interview with Fred Rewey at IPCPR2014 here.
Get into the discussion and share YOUR Top List here.

Comment by Catfishbluezz on December 12, 2014 at 12:44pm
All things considered, pretty badass Fred made our list twice between all these reviewers... Let alone, a Conny made the list! So stoked to see this get the attention it deserves. I had a couple from ipcpr Fred gave me and it was easily one of the best new connys I've had. Being the Conny master, that doesn't happen often with me. So many people blend connys all wrong, this one was done right.

Really need to pick a few of these up, forgot last time I ordered from the store. Gotta keep that in mind next time I order. Fred is taking over the world

I need more of these. Only have two left!

Thanks Catfish. Really a tough cigar to create - Especially since I had lost my taste for Conny's for the most part. Maybe that sounds a bit harsh, but they were all boring to me since I had spent several months blending in Nica. I can tell you it will be awhile before I try and do another Conny. Just trying to learn all I can...

There's also a lancero in this blend. Fred was kind enough to give me one when I met him at a Seattle area shop earlier this year. I thoroughly enjoyed it. Great blend in a great vitola.

This is one of the few connecticut wrapper cigars that I enjoy. Very deserving of its spot on the list!

The problem is most guys are blending stronger cigars all day, so they blend Conny's that will hit their palate after being used to blending stronger stuff.  The result is conny's that overpower.  Not to blow your ego up, but the two cigars that made the list are vastly different, and both are excellent. Not many blenders can do that really.

And Jerad, I do not have any left.  I smoked mine for review, and then again to determine rankings for our lists.  If you want to box split in a month of so, I am down. I just need to chill on the fundage and recover from December...or get a student aid check lol.

My #2 Connecticut cigar period.  Homerun of a cigar!  Changed my perspective on CTs all together.