Without further adieu, I unveil #5 on our list - please check back tomorrow for #4. 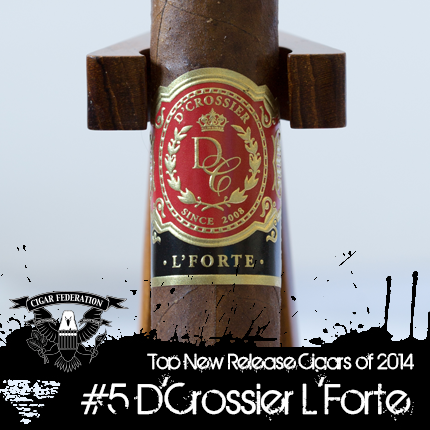 As we enter this year's Top 5, we come across a cigar that actually took home one of our reviewer's top spots this year (pay attention to the site to find out who) - the D'Crossier L'Forte! While relatively unknown to many in the cigar world, the brand under the Pure Aroma Cigars umbrella is based out of Miami and manufactured in Costa Rica under Isaias Santana Diaz.  D'Crossier announced their newest blend at IPCPR2014 which is to be a limited production run of only 2,000 numbered boxes each year.

"The nose on the L’Forte is sweet wet leather with hints of white pepper."

"The first starts off with light dry cedar and pepper that is subtle and starts to build as I proceed. The initial profile is excellently balanced."

"The second third starts off with a spicy cedar that lingers on the palate. I liken it to a spicy rich curry. There is some real tobacco strength hitting home now."

"The final third and I’m really feeling some full body tobacco now, without losing any of the flavor complexity. The cedar ends up dominating here so that the last third isn't quite as complex as the first and second."

"The L’Forte’s flavor profile is a blockbuster."

Catfish kind of pre- warned me about how good the D'Crossier stuff was, I should have guessed it would make the list. My guess is Crux will make it too.

I cannot speak for the other guys, but had I reviewed a Crux or two, I would have put them in my top ten, if not top five.  Crux is making some goooood sticks man.  I am looking for a dealer now.

And the same goes for D'Crossier.  All three of his blends kick ass, and that is why this made the Top Five for us.  You cannot deny how tasty these are, even if you don't like it, you know it is a good smoke.

This is probably the one cigar that should have made my list but didn't.  I had some construction problems early on.  The later versions I smoked were much better.  But consistency was a key factor on what was on my list.