Without further adieu, I unveil #4 on our list - please check back tomorrow for #3. 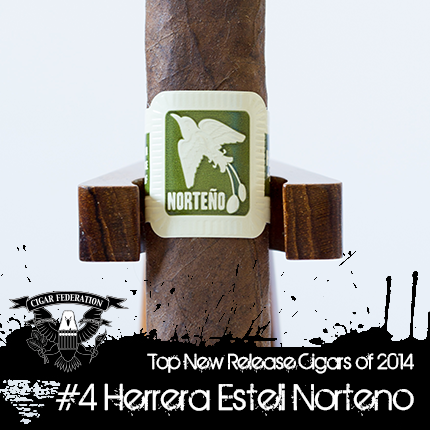 2014 was a huge year for Drew Estate and Willy Herrera. In May, the company announced that Willy Herrera was taking on the title of "Master Blender", and in October, the long rumored acquisition of Drew Estate by Swisher International finally took place. In the middle, one of the most anticipated releases of the year made its 'debut' at IPCPR2014 when the company officially released #4 on our list - the Herrera Esteli Norteno!

On the heels of the wildly successful Herrera Esteli, the Norteno followed up with a slight twist on the original - the Norteno includes a similar Honduran binder with Nicaraguan filler, but utilizes a Mexican San Andres wrapper in place of the Ecuadorian Habano.  The name refers to the Northerners of Nicaragua (where Esteli is located), and the bird on the band is the national bird of Nicaragua; the turquoise-browed motmot or Guardabarranco which Herrera told us is rare, but he saw several times while working on the blend and believed it to be an omen. The Norteno is available as 10 count boxes in soft press vitolas of: Coronita (4’ x 46 gauge),  Corona Extra (4 3/4” x 48 gauge), Belicoso Fino (5” x 50 gauge), Robusto Grande (5 1/2“x 54 gauge), Toro (6” x 50 gauge) and lastly the Lonsdale Deluxe (6 1/2“x 44 gauge).

"The wrapper - a dark brown Mexican San Andres - might be the toothiest wrapper I've seen in awhile."

"The nose on the Norteño is outrageous.  Notes of molasses, cedar and a heavy pepper have me salivating to light up."

"Right off the bat I was hit with classic maduro flavors of dark chocolate, molasses and damp earth. There was a white spice on the retrohale that quickly transitioned to a heavy black pepper spice."

"The spice slowly takes a step back while chocolate and cedar marry.  The spice remains on the finish and I feel like it begins to slowly return as I enter the finale."

"The last third is a medley of all of the previous flavors fighting for dominance.  They seem to wax and wane through the last third until it becomes quite earthy to finish."

"Willie was right when he said this was a richer and stronger cigar, but it wasn’t super strong. I would call it a medium strength with a trend toward a medium-plus. Not overpowering by any means."

"The Herrera Esteli Norteño is a fantastic entry into the already full Drew Estate line-up.  I do want to revisit these after a few months because I have the suspicion that they will be even better."

Comment by Joshua Andrew on December 16, 2014 at 4:39pm
This stick is phenomenal. I'm definitely going to buy more of them.

Wondered when this one would come in.  When. Not if.

Yeah, this is a great cigar. I've only had 3 sizes, but each one has been very good...and it is one of the most severe box pressed cigars I've seen in a long, long time. The lonsdale size is super thin.

My favorite wrapper, but not my favorite cigar using it. I will try a couple more Nortena's to confirm but here are 2014 releases using the same wrapper that I prefer: