Without further adieu, I unveil #3 on our list - please check back tomorrow for #2. 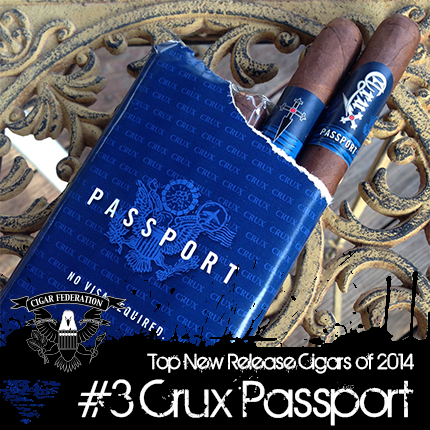 Crux Cigars has been taking the social media community by storm all year - generating a lot of interest in the brand and its blends. If you've followed the Crux social media channels, you've seen giveaways and factory pictures of #3 on our list - the Crux Passport.

"The wrapper is a smooth, medium-brown, and it took quite a while to be able to see the seams. Such great construction. Add to that a clean pigtail cap and a closed foot, and this cigar is hard to beat, even before lighting it. The cold draw shows notes of leather and tobacco. Along with a little tingle on my tongue."
"The Crux Passport lit right up and started with a nice little spice kick, with notes of leather and wood. The retrohale has a strong spicy blast and just pours out white smoke."
"In the second third of the Crux Passport, leather moved into the forefront with the wood notes holding up the background. The spice has really picked up as well."
"The smoke production has been impressive from such a small cigar, with thick, white clouds pouring out the whole time. The ash was nice and tight, and was a smooth light grey, with some charcoal banding and spots. The ash held on for a third of the cigar at a time, with no problems, and no need to touch up."
"The construction on the Crux Passport Half Corona proved to be at least as good as the first impression led me to believe. Perfect. And the small size left nothing out, incorporating many flavors, that were always full."

EDIT: An earlier version of this article incorrectly listed the blend information for the passport. Thanks to Logan Drake of Crux Cigars for the correction.

Of all the Crux line....the Ninfa Natty takes the cake with flying colors! Great stick at a great price.

Comment by Generally Useful Jared on December 17, 2014 at 10:54am
Total agreement here. Passport lancero is my #1 for the year. Floral notes so prominent, it was like fresh roses.

Sounds like I need to track down the Lancero, Jared - I've been on a floral kick this year.

I really like this cigar! It's one of the few non cubans with a "floral" flavor profile that I enjoy.

Comment by Generally Useful Jared on December 18, 2014 at 6:53am
http://cruxcigars.com/index.cfm/crux-where-to-buy
Here you go. I don't think they're at any of the "big" online retailers (CI, Famous, etc.) but I imagine someone on this list would do online or phone orders.