Without further adieu, I unveil the #1 cigar on Cigar Federation's Top New Releases of 2014 list... 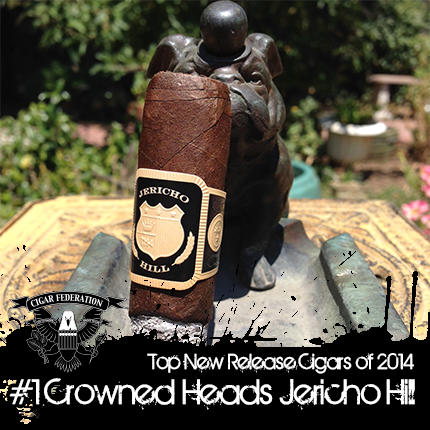 As with many of the Crowned Heads releases, Jericho Hill has a story that is rooted in music.  The name is derived from Johnny Cash's rendition of "Cocaine Blues" featured on the live album "At Folsom Prison" which was released in 1968.  In the song, Willy Lee is caught by the sheriff from Jericho Hill.  Leave it up to Jon Huber and Mike Conder to come up with something like that.

"The look of Jericho Hill is very cool.  The black and ivory band is eye-catching while the San Andres wrapper is dark and rugged."
"The nose on the Jericho Hill was a mixture of black pepper, some indeterminate baking spices and barnyard. On the cold draw I was able to pick up lots of sweetness with just some slight hay at the end."
"The first puffs of the Jericho Hill start off with a blast of full bodied flavors. Mainly, there is a deep, woody/cedar note, with these awesome sweet finishes of molasses."
"At 1/2 inch mark, the Jericho Hill took on the characteristics of a chocolate souffle in both flavor and texture.  The flavors were sweet and dry (cocoa powder) and did not have a heavy mouthfeel.  There was a fruity brightness on the finish that I couldn't quite put my finger on.  I want to call it a dried cherry, but it was a bit more tangy than that.  Either way, it was a nice component to the flavor.  There was a little spice on the retro that built as I progressed, but it was not as strong as I would normally expect from Pepin."
"In the middle, the woody earthiness is the prominent flavor with a sweet, musky spice on the finish. I really enjoy the finish of this."
"The final third of the Jericho switches it up yet again and becomes very woody and just a little bit drier. The sweetness starts to fade out as I near the end, leaving  a woody and earthy note."
"No matter how you slice it, the Jericho Hill is a damn good cigar.  It was a departure from the norm for both Crowned Heads and My Father.  The profile was unique and the aroma was awesome.  The balance of flavors was outstanding.  Basically I could smoke the Jericho Hill all day, every day."
"Its immediately my favorite Crowned Heads blend to date and one that I will definitely smoke again."

I wouldn't put these at the top of my list but they would for sure make my list. I really enjoyed the .44S and OBS, more than a solid cigar. I'm sure excited about the new release in the Jericho Hill line (Shots 4x42), I'll be grabbing some up this February. I dont disagree with your guys' decision.

These were definitely near the top of my list for the year.  Great smokes.

My favorite of their regular production/core lines. I've had all four sizes and, while I have my preferences (44S and LBV), they are each very, very good.

Comment by Generally Useful Jared on December 19, 2014 at 5:46pm
Wow, all the speculation we were doing, how did we fail to notice this wasn't on there yet? Nice list everyone! It's got people talking!

I think its a good list, and very indicative of what Cigar Federation is.  While the list varies drastically from my own personal list (to be posted Monday), I think this list does accurately represent the site as Coop detailed the other day.

The Jericho Hill, IMO, will be a high performing cigar on many lists this year.  While it won't make my list, it is, IMO, the best offering I've had from Crowned Heads and is well deserving of the honor.

Although, after two years of naming a CH stick #1 in our group list, people are going to start accusing us of being to Crowned Heads what others are to other brands!! :P

Me and you both Jared LOL we thought we had a good idea and Jericho didn't even come to mind!

Yeah, but since CH only has one stick in the list, and Nomad has two, you may be accused of being Nomad homers -- or even House of Emilio, since 1502 also makes the list ;)

All kidding aside, I think the list demonstrates what we all know to be true -- we all have different palates, and enjoy different cigars to varying degrees. Once your own personal top 10 lists are released, that will only be confirmed, imho. At the end of the day, I think it makes for good discussion, and encourages a cigar junky like myself to try different cigars that I might not otherwise think to try.