As we near the end of 2013, you will begin to see many "Top" lists throughout the cigar community.  The Cigar Federation team decided to attempt to do something a bit different.  Each of the main reviewers on the site - Logan, Rob, Dustin, Jerad and John - has their own list, but we also wanted to see what a Cigar Federation Consolidated list would look like.

I gave the guys absolutely no direction - I just asked for their lists.  Some of the lists included only cigars released in 2013 and others included the reviewers favorite cigars smoked in 2013.  Some of the lists were just cigars that the reviewer had reviewed on Cigar Federation while others might not have been reviewed and were only smoked.  Some lists included Cubans and some were just "domestic".  This, coupled with the fact that the 5 reviewers live in different parts of the country and Canada (and, thus, have access to different cigars) and have vastly diverse palates, produced some interesting results.  The #1 cigar on our Consolidated list only showed up on 3 of the 5 total lists.  The most any cigar appeared was 4 times meaning no cigar was a unanimous "Top" cigar for all our reviewers.

Over the next ten days (not including weekends), I will unveil another cigar in the Consolidated List.  In the end, each of our reviewers will unveil their personal lists.  How does your list match up?  Without further adieu, I unveil #9 on our list - please check back tomorrow for #8. 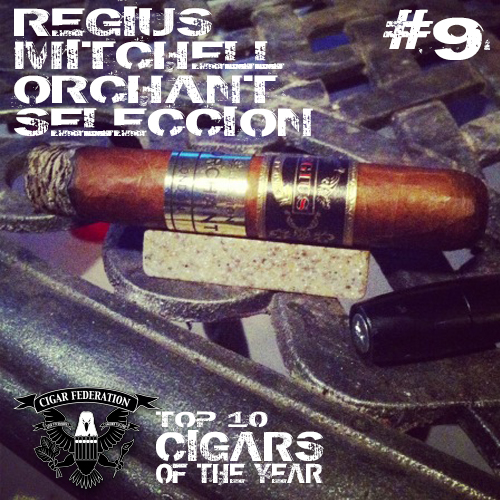 Regius Cigars was launched by Akhil Kapacee in 2009 and has had steady growth in the UK and Europe as a whole before recently expanding to the US market after entering into a distribution agreement with SAG Imports.  At IPCPR this year, we sat with Manuel Quesada and Akhil to learn more about the brand and what was coming in 2013 and they introduced us to #9 on our list - the Regius Mitchell Orchant Seleccion.

Mitchell Orchant is the biggest retailer of Cuban cigars in the UK, and, according to Akhil, a friendship and business relationship was struck between the two over some single malt and some cigars that resulted in the birth of this collaboration.  Akhil detailed to us that while Mitchell is a great guy, he tends to be a bit of a stickler when it comes to blending cigars and so the two went back and forth numerous times on the blend until they felt that they had nailed what they were looking for - a cigar that rivaled the Partagas Serie D No.4.  The Mitchell Orchant Seleccion is a Nicaraguan puro, but little more is known about the blend specifics.

"Initially, I felt that the Orchant had a tad more body then the normal Regius line, specifically in the retrohale, but never overpowering.  Sharp earth notes, peanut undertones, no spice, and a creamy draw made for an incredible first third.  The finish encompassed my entire mouth, with well-rounded notes encompassing mid tongue."

"The retrohale added a nice cedar note, and seemed to add the coffee bean notes, while the palate and tongue interacted with the nuts and earth."

"Really, the depth of the tobacco profile is excellent, and the addition of citrus peel and vanilla seem to have kept my mind racing."

"Seemed like floral undertones picked up, and honestly my palate was full of flavor.  Notes were all over the place, so much so that I feel reviewers will be all over the place.  The earth and cedar notes had left, while the peanuts, floral, citrus, coffee bean, and vanilla notes still lingered with distinction."

"I can tell Orchant has an impeccable palate, because a cigar like this embodies the classic flavors of aged Habanos and classic cigars."

this sounds great too

Definitely on my list to track down.  I thought the Regius White Label was enjoyable, but this excites me even more knowing it was an attempt to rival the PSD4!