Over the next ten days (not including weekends), I will unveil another cigar in the Consolidated List. In the end, each of our reviewers will unveil their personal lists. How does your list match up? Without further adieu, I unveil #6 on our list - please check back starting Monday as we unveil the Top 5! 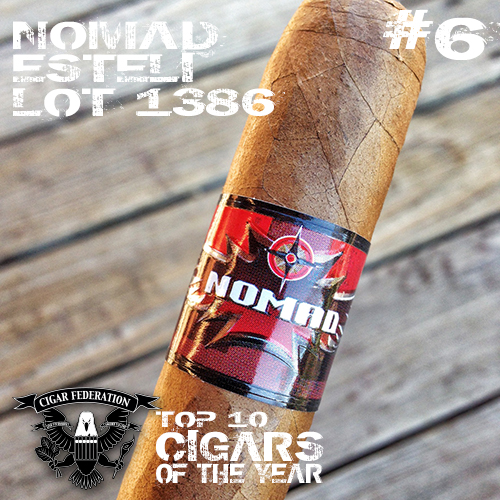 Launched in early 2012, Fred Rewey's Nomad Cigar Company quickly attracted the attention of the online cigar community.  One of Rewey's goals when he entered into the industry was to create a connection with the consumer and he did this through tremendous accessibility and outreach as well as being the first brand to include its Twitter handle on cigar bands - something that has earned rave commendations from at least a few members of the community.

The original productions from Nomad were all based out of the Dominican Republic (with a little Nicaraguan Ligero), but in early 2013, Rewey announced that he was experimenting in Esteli on something new.  When we caught up with him on CigarChat and IPCPR he furthered the story for us.  He called the trip "a fact finding mission" that went awry to find a cigar that could introduce Nicaraguan tobacco to a Dominican cigar smoker, but not blow them away.  Rewey told us how he purchased a lot of tobacco and stumbled upon two bales of "really good ligero that was a little bit different".  The next step was to go back and go through blend after blend after blend until he finally arrived at #6 on our Consolidated Top Cigars of 2013 list - the Nomad Esteli Lot 1386.  Unfortunately, Rewey was only able to produce 357 boxes (of 12) of these cigars, and after keeping 50 for himself, only 307 saw the marketplace.  Despite Fred's attempts to find more of the ligero that makes this cigar, it just cannot be found so what is out there is all we will ever see of this cigar.

The Nomad Esteli Lot 1386 is comprised of an Ecuadorian Habano wrapper surrounding Nicaraguan binder and filler from Esteli and Jalapa.  The cigar got its name as an homage to Esteli - 1386 representing the latitude/longitude coordinates of the town.  Additionally, the purpose behind the 307 boxes being released is that it is the approximate square mileage of Esteli.

"The cold draw was very spicy and it was apparent that this Lot 1386 had some kick ass ligero in it. Right off the bat you can taste the spice and richness of the ligero."

"The first impression is lots of pepper.  The pepper burst calms down almost immediately to balance out well.  There are some nutty flavors that break though at about the 10 minute mark.  Very balanced profile."

"The flavors are creamy presenting some wood and nut flavors with some spice on the retrohale and some very sublte floral sweetness."

"The nutty flavors present in the first third are still the primary taste going into the second third."

"There was a sweetness that ran throughout the entire cigar which Fred attributes to the Jalapa tobaccos used. There is some earthiness, leather, and pepper that is mixed in during the smoke which adds the complexity and depth I seek out in cigars."

"As I near the end, a rich chocolate takes over and leaves on a pretty pleasing note."

"The Nomad Esteli Lot 1386 LE is a very balanced cigar for the entire smoking experience and finishes as well as it starts.  This is one of those cigars that you will smoke right down to the nub."

"The Nomad Lot 1386 is a must try based on the flavor and the complexity of the cigar."

Sweet! Just got my first from Santa Lawler. I know you guys liked these, so I've been interested for awhile.

I know my SS is getting one of these from me. ;)

Glad the package got to you safe and sound. I think you will like it. One of my favorite new cigars of the year.

Thanks and honored to be on the list! A true LE that is getting harder to find (really wish I could have made more). Spoiler Alert: It was the basis of a 2014 blend :) - Ooops, I have already said too much.

Hey now...let's not get any early submissions to the academy yet..don't want to jinx it...

I got one of these in the pass and loved it.. I know they are LE and my B&M owner shared a sample of the S-307 and it was also an awesome smoke. Keep hittin them out of the park Fred!

I will need to get a pre-release sample first :)