Over the next ten days (not including weekends), I will unveil another cigar in the Consolidated List. In the end, each of our reviewers will unveil their personal lists. How does your list match up? Without further adieu, I unveil #5 on our list - please check back tomorrow for #4! 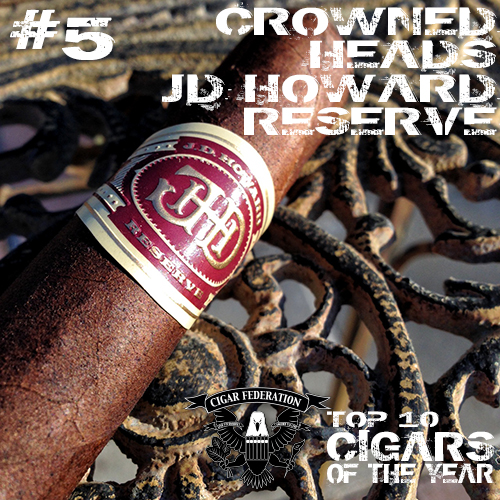 The Crowned Heads immediately put a stamp on the cigar industry in 2012 with its Four Kicks, Headley Grange and Mule Kick releases that were all over Top 10 lists across the community, and many were eager to see what would come from the brand in 2013.  When Jon Huber and Mike Conder learned that the outlaw bank robber Jesse James came to East Nashville, home of The Crowned Heads, in the 1870s to attempt to establish a normal life, they found their inspiration for #5 on our Consolidated List of Top Cigars of 2013 - The Crowned Heads JD Howard Reserve.  JD Howard is the alias that Jesse James used while living in Nashville.

J.D. Howard Reserve is a throwback to an era where times were wild, yet values were still upheld. It is an outlaw’s take on the laws of tradition. It’s an homage to our country’s history, and a look towards the future of cigars.

The J.D. Howard Reserve blend was built around juxtaposition and contradiction. Its character is bold yet refined; its flavor profile is simple yet complex. It meets your palate with a spicy pepper rush and leaves it with subtly sweet cocoa notes. It is a rugged yet balanced smoke that is medium in body and full in taste. – Crowned Heads

Started working on project in 2012 with Ernie in September/October and finalized the blend in February.

Like all their previous releases, the J.D. Howard Reserve is blended by Ernesto Perez-Carrillo Jr. at the Tabacalera La Alianza factory in the Dominican Republic. Jon told us at IPCPR that they began working with Ernie back in September or October of 2012 on the idea, and had a finalized blend by February. The blend profile consists of a Nicaraguan filler, an Ecuadorian Sumatra binder, and a Brazilian Arapiraca wrapper.

"The band, with the gold-embossed JDH logo, looks fantastic."

"The cigar starts off with a bit of spice on the back of the throat and a pleasant buttery sweetness as a counterbalance."

"At the 3/4″ mark, the complexion took on a creamy quality and I began to taste a sweet and tangy berry note in the background."

"This flavor profile continues for a while before adding leather and wood, and backing off some on the sweetness. The remainder of the cigar, the part I enjoyed the most, is dominated by black coffee and roasted nuts with some leather and mild spice playing out in the background."

"I would break down each puff like this: creamy smoke, hot spice on the retro, honey and nougat sweetness on the tongue and finish, followed by a green bell pepper/vegetation note on the back end."

"There was not a lot of movement as I reached the end of the JDHR. The sweetness became more of a sweet cream flavor, which added some tanginess. The chili pepper spice kicked up a notch or two and an interesting smoky flavor joined the finish."

"The burn continues perfectly until I put it out."

"It is, by far, the sweetest offering from Crowned Heads to date and it may just be their best cigar as well. Every puff of the J.D. Howard Reserve gave me everything I want from a cigar. There was amazing flavor, great balance, deep complexity, thick smoke and a wonderful finish."