Over the next ten days (not including weekends), I will unveil another cigar in the Consolidated List. In the end, each of our reviewers will unveil their personal lists. How does your list match up? Without further adieu, I unveil #4 on our list - please check back tomorrow for #3! 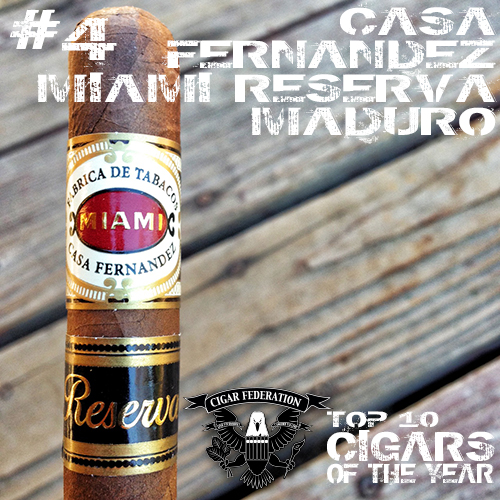 Of all of the entries on our Consolidated List, the manufacturer behind #4 on our list is arguably the most established. Formerly (and still sometimes) referred to as Tabacalera Tropical, while Casa Fernandez has been producing cigars for many years, it has definitely seen an uptick in popularity over recent years after the move to Miami.  The namesake of this factory - the Casa Fernandez Miami - was extremely popular and appeared on several Top Cigars of 2011 lists including Cigar Aficionado's.  The "sequel" to that cigar is #4 on our Conslidated List of Top Cigars of 2013 - the Casa Fernandez Miami Reserva Maduro.

Casa Fernandez is known for its use of Aganorsa leaf in its blends and also tends to use a San Andres Mexican wrapper on most of its maduros, and the Miami Reserva Maduro is no different. Named because it is rolled in Casa Fernandez' Miami factory, the Miami Reserva Maduro is a Nicaraguan Puro comprised of Medio Tiempo Maduro, Ligero and Viso from several Aganorsa farms in Jalapa, Condega and Esteli wrapped by a San Andres Mexican maduro.

"I am normally very critical of San Andres wrapped cigars, but the Casa Fernandez Miami Reserva Maduro was perfect in every way."

"The Casa Fernandez Miami Reserva Maduro to me was like smoking a chocolate bar with hints of pepper and a fruity sweetness.  It was full-flavored, complex, full-bodied and medium-plus on strength."

"There was a point when I was smoking where I put the Casa Fernandez Miami Reserva Maduro down and said, 'Damn, this is freaking good!'"

"Was one of my most surprising cigars I smoked all year."

You can see the Casa Fernandez Miami Reserva Maduro discussed on Half Ashed here.
Get into the discussion and share YOUR Top List here.