Over the next ten days (not including weekends), I will unveil another cigar in the Consolidated List. In the end, each of our reviewers will unveil their personal lists. How does your list match up? Without further adieu, I unveil #3 on our list - please check back tomorrow for #2! 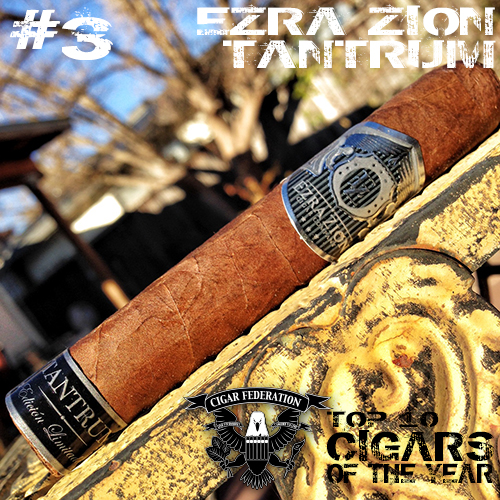 In 2012, the team behind Cigar Federation decided to enter into the premium cigar world and created Ezra Zion Cigars. (DISCLAIMER: While ownership has not changed, management of this site has. The Ezra Zion Cigars team is not involved in day-to-day operations of this site, has no editorial power on this site's content, and have no impact - either way - on our rankings nor reviews) The brand surprised many in 2012 as it received much critical acclaim for its two releases - Reagan and Inception, now Jamais Vu - both of which were on the medium side.  In early 2013, the brand announced they had set out to produce a small cigar with bold flavor and released the #3 cigar on our list - the Ezra Zion Tantrum.

Blended at Tabacalera Tropical, the Tantrum includes 5-7 year aged Nicaraguan Ligero filler, with a Nicaraguan 98 Criollo all inside a Vintage Nicaragua 99 Corojo Rosado wrapper. The vitola is a 4.44x44 "Prensado Pequeno" that Kyle tells us is because one partner of the Ezra Zion team has "OCD" and "wanted even numbers" so "when you look on the box you see all 4s"!  The Tantrum is scheduled to be an annual Limited Edition with only 1500 boxes of 28 produced.

"I thought the rugged look of the wrapper was a nice juxtaposition to the elegant bands.  It was like a UFC fighter wearing a suit."

"The wrapper smelled like a cinnamon graham cracker while the foot smelled of unsweetened cocoa powder."

"This 4.4x44 powerhouse packs a lot of punch with a chocolate-chile flavor that I found really enjoyable."

"The main flavor component was a bold red pepper note which provided flavor of the pepper as well as heat. There was an accompanying flavor of Cocoa."
"Right off the bat red pepper went all Mike Tyson on my palate, with a cedar bat beating my taste buds into submission.  There was some brown sugar in the background, but the beginning is rather strong, but subsides about five minutes in."
"The cocoa dries out a bit and loses some of it’s sweetness.  At the midpoint a dry, earthy sweetness joined the fray."
"The draw became much smoother at this point, but the retro was still banging with pepper.  I felt that the Tantrum had moved into the medium world for a short while, with the brown sugar picking up some burnt sugar notes as well."
"It jumped into full strength and it did so rather quickly.  One puff we were cruising along, then BAM!  The red pepper flavor became more of a black pepper and lingered on the back of the tongue.  The sweetness of the cocoa and “earthy sweet flavor” remained."
"The draw is perfect, the burn and ash are excellent, and the wonderfully aromatic smoke produced by this little stick outperforms most sticks twice its size."
"The Ezra Zion Cigar Company has hit it out of the park with the Limited Edition Tantrum. This cigar may be small in stature but it more than makes up for it in terms of flavor, strength, and construction."
"I think I can comfortably call this my favorite EzraZion offering to date"
"As an avid corona smoker, who has at least 500 coronas on hand at any given time, the Tantrum was arguably one of the most complex coronas I have experienced. "