As we near the end of 2013, you will begin to see many "Top" lists throughout the cigar community.  The Cigar Federation team decided to attempt to do something a bit different.  Each of the main reviewers on the site - Logan, Rob, Dustin, Jerad and John - has their own list, but we also wanted to see what a Cigar Federation Consolidated list would look like.

I gave the guys absolutely no direction - I just asked for their lists.  Some of the lists included only cigars released in 2013 and others included the reviewers favorite cigars smoked in 2013.  Some of the lists were just cigars that the reviewer had reviewed on Cigar Federation while others might not have been reviewed and were only smoked.  Some lists included Cubans and some were just "domestic".  This, coupled with the fact that the 5 reviewers live in different parts of the country and Canada (and, thus, have access to different cigars) and have vastly diverse palates, produced some interesting results.  The #1 cigar on our Consolidated list only showed up on 3 of the 5 total lists.  The most any cigar appeared was 4 times meaning no cigar was a unanimous "Top" cigar for all our reviewers.

Over the next ten days (not including weekends), I will unveil another cigar in the Consolidated List.  In the end, each of our reviewers will unveil their personal lists.  How does your list match up?  Without further adieu, I unveil #10 on our list - please check back tomorrow for #9. 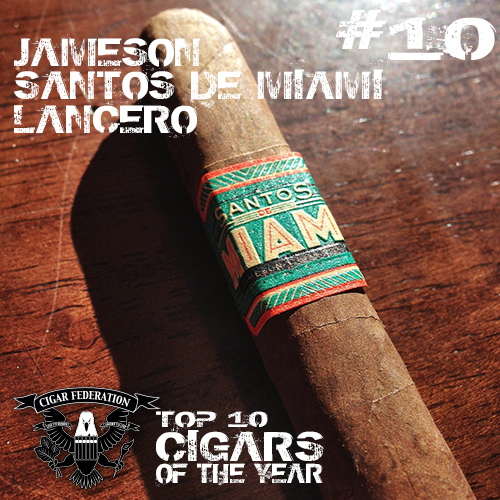 A blend inspired by the spirit of Miami, particularly Calle Ocho (as is evident by the Miami Dolphins-inspired color scheme and the Art Deco branding that was once so prevalent in Miami), the Santos de Miami is a Dominican puro with a Havana Corojo wrapper, Criollo '98 binder, and Corojo and Criollo fillers.  The Santos de Miami Lancero is presented in a box press and finished with a pig tail cap.

Jameson Cigars unveiled the Lancero extension of the Santos de Miami line at IPCPR 2013.  There, Brad Mayo stated that the company was a bit worried with how the blend would translate to the Lancero vitola, but the cigar turned out fantastic and the company is extremely excited about them.  Mayo indicated that only a few hundred boxes of the Lancero would be produced a year presumably due to the difficulty in properly creating the lancero vitola for the company's rolleros and buncheros.

"The Santos de Miami has a very intriguing aroma. I couldn't place anything exact, but the cold draw was a slightly sweet cedar note. With a very tasty 'aged' component, that may have been what I was getting off the foot."

"The Santos de Miami started off smooth and very tasty. I'm not completely sure if the profile shifted that quickly or if it just took me that long to place it, but I was getting a salty, citrusy flavor. The retrohale had a nice little sting, that was surprising, but welcome."

"The second third starts out with the same salty, citrus that was the main note in the first third. Except, a smokey wood note starts to push it's way to the forefront."

"In the final third the citrus notes all but disappear, leaving the saltiness and smoke tones."

"For the duration of the Santos de Miami, the smoke production has been nice and thick, and surprisingly large in quantity, given such a small ring gauge. The ash remained tight and the burn straight, with no need for touchups. The ash held for about 3/4" - 1", which seemed normal for such a small amount of surface area."

"The Jameson Cigar Co. Santos de Miami is a little cigar, that will take you on a undulating journey of smoking bliss. I absolutely loved this cigar."

You can read Jerad's full review of the Jameson Santos de Miami Lancero here.
Get into the discussion and share YOUR Top List here.

I love this time of the year.   Looking forward to all of the lists.

I know some people hate list but as a beginner I like having a point of reference and then a point to argue! Boxed pressed lancero with a tail! Interesting to say the least!

I really need to try this now given the love from my brothers.  The box press on it is insane

Thanks for the comments, guys - always interesting to see everyone's lists, and I think the CigFed reviewers put together a really interesting list.  It will be intriguing to see how it is taken by our members as we unveil more and more.

As for box-pressed lanceros, I struggled to think of many that exist.  Rocky has a few, right? And there was the Tatuaje Tattoo.  And I recently had the Epicurean Gonzo that was box-press if I remember correctly.  What else?