According to a filing with the Alcohol and Tobacco Tax and Trade Bureau (TTB), Point Pleasant Beach's Last Wave Brewing Company received approval on April 11th for a can label for Quiver IPA: Strata. 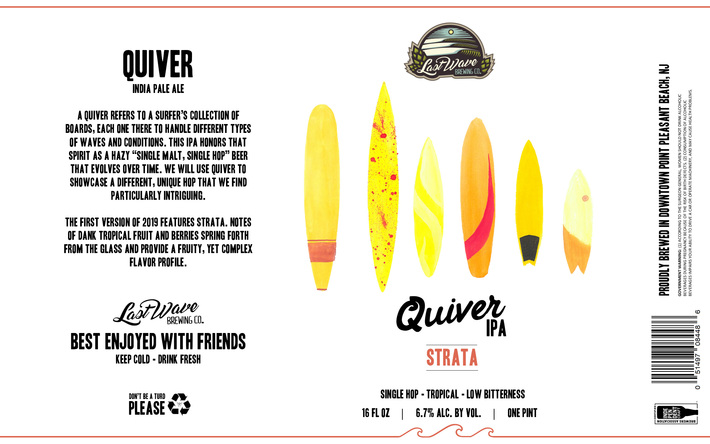 According to label art, "A Quiver refers to a surfer's collection of boards, each one there to handle different types of waves and conditions. This IPA honors that spirit as a hazy 'single malt, single hop' beer that evolves over time. We will use Quiver to showcase a different, unique hop that we find particularly intriguing."

As the label continues, "The first version of 2019 features Strata. Notes of dank tropical fruit and berries spring forth from the glass and provide a fruity, yet complex flavor profile."  Quiver: Strata is a 6.7% ABV IPA that is already available in 16 oz cans.  Last Wave announced the debut of Quiver: Strata cans in mid-March, and cans were released to the public and in distribution by the end of March.

Quiver debuted in late 2017 with Quiver: Calypso. Since, Last Wave has debuted Quiver: Denali in April 2018, Quiver: Belma in August, and Quiver: Comet in December.  As the label indicates, Quiver: Strata is the first variant of 2019 debuting in March, and it is the first to be released in cans.

Requests for additional details were not immediately returned by Last Wave.