Back in August, we broke news that Last Wave Brewing Co in Point Pleasant Beach, NJ was working on debuting cans of their flagship A-Frame IPA in the Fall.  Now, we can confirm that A-Frame cans will be for sale beginning October 27th along with another Last Wave flagship - Red Sky. In talking with Last Wave co-owner Bert Roling, we learned that Last Wave has changed the can label design prior to release. According to Roling, "We've actually gone back and taken the design of these cans in a new direction that is more fitting for our style here at Last Wave. That being said, A-Frame has a new label and Red Sky has a similar design. We love the simplicity and clarity that these labels bring to the brand."

A-Frame is a 6.1% ABV India Pale Ale that was one of the initial offerings from Last Wave when it opened in May 2017.  Can art for A-Frame reads "Peer through the haze of this ale and you'll be rewarded with a unique punch of flavor brought on by a creamy wheat body and a tropical essence from this delightful hop blend.  This is certainly an IPA, but it does its thing without battering your taste buds like a nasty north wind." A 4-pack of A-Frame will sell for $15. 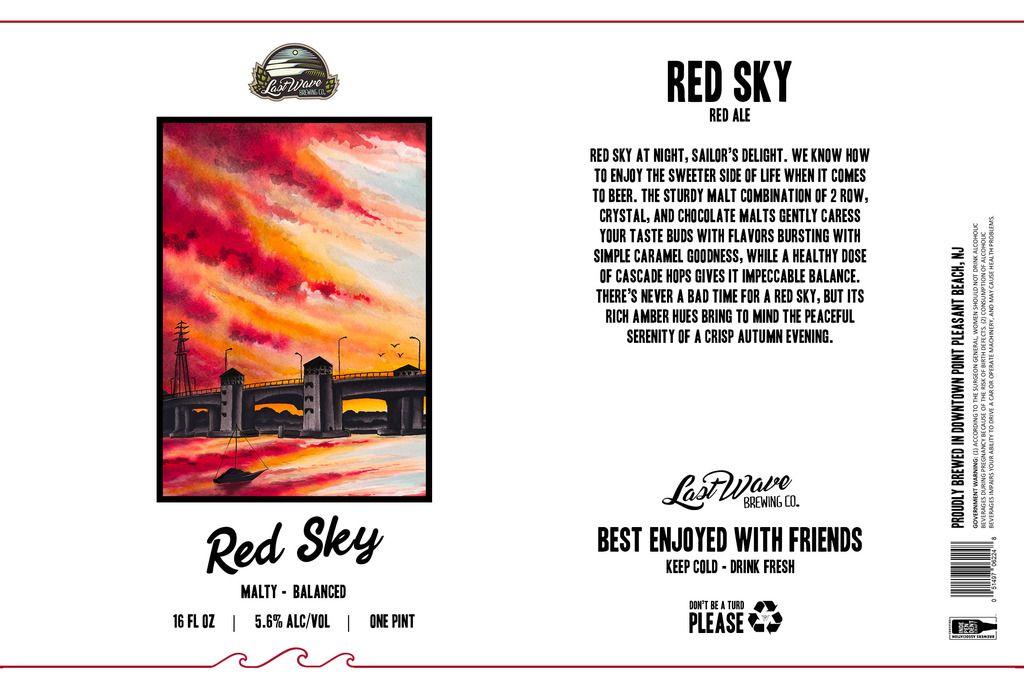 Also being released this weekend is Red Sky. Red Sky is a 5.6% ABV Red Ale that also was one of the initial offerings from Last Wave when it opened in May 2017. Can art for Red Sky reads, "Red sky at night, sailor's delight. We know how to enjoy the sweeter side of life when it comes to beer. The sturdy malt combination of 2 Row, Crystal, and Chocolate Malts gently caress your taste buds with flavors busting with simple caramel goodness, while a healthy dose of Cascade hops gives it impeccable balance. There's never a bad time for a Red Sky, but its rich amber hues bring to mind the peaceful serenity of a crisp autumn evening." A 4-pack of Red Sky will cost $14 at the brewery.

When we asked Roling if we could expect to see more cans from Last Wave in the future, he informed us that was a distinct possibility. "Iron Heart will be canning these for us, and we'd like to have them here once a month in 2019 to continuously release new stuff", said Roling. "Right now we're in the midst of a brewhouse expansion project that will allow us to double our production in the next few months.