According to a filing with the Alcohol and Tobacco Tax and Trade Bureau (TTB), Icarus Brewing Company in Lakewood, NJ received approval for, what we found to be, one of the funnier can labels in recent memory.  On May 2nd, we contacted Jason Goldstein, Owner and Head Brewer at Icarus, about the label, and he told us, "we took our in house artists mock up of it and had our graphic designer go to town on it".  The result is the label for Icarus' newest release, Pineapple Hindenburg. 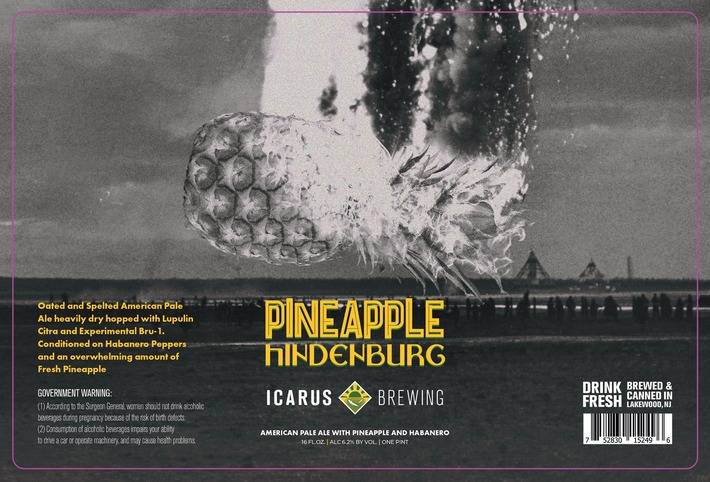 Goldstein added, "we updated to fit in with our more current lineup of North Easts so its fuller bodied than its previous iterations. We added Spelt into this batch as well as dry hopping it with Lupulin Citra and Experimental Bru-1 before conditioning it on Fresh Pineapple an Habanero Peppers." Alongside Pineapple Hindenburg, Icarus will be releasing a fresh batch of Neon Fantasy.  Neon Fantasy is an 8.1% ABV Imperial India Pale Ale with Lactose, Coconut, and Lemongrass.  Goldstein detailed Neon Fantasy as a "Brux North East IPA with Lactose that was brewed with Lemongrass and then conditioned on more Lemongrass and Toasted Coconut as well as dry hopped with Lupulin Citra, Idaho 7, and Experimental Bru-1."

Both releases will be available beginning Wednesday.