On August 1st, Cape May Brewing Company in Cape May, NJ received approval from the Alcohol and Tobacco Tax and Trade Bureau (TTB) for two new limited release beer labels - a can label for Coastal Evacuation with Brettanomyces and a can label for a new beer called Fleetingly Anchored. 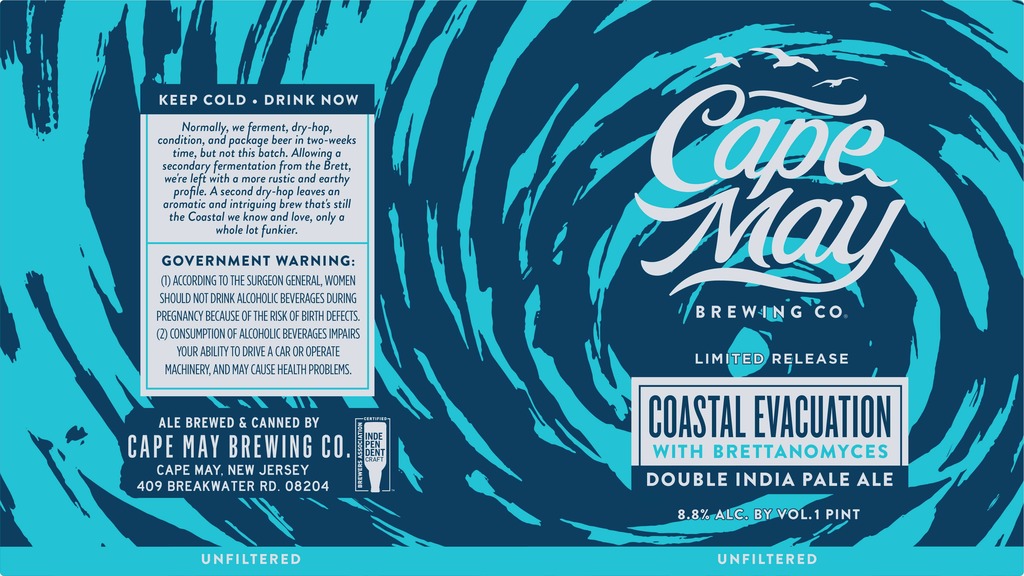 Coastal Evacuation with Brettanomyces in an 8.8% ABV variant of the popular Cape May DIPA.  Cape May initially introduced this beer in February 2017 on draft in the tap room.  Label art for the beer details:

Normally, we ferment, dry-hop, condition, and package the beer in two-weeks time, but not this batch. Allowing a secondary fermentation from the Brett, we're left with a more rustic and earthy profile. A second dry-hop leaves an aromatic and intriguing brew that's still the Coastal we know and love, only a whole lot funkier

The original Coastal Evacuation, packed with copious amounts of Centennial hops, has been a focal point of Cape May's portfolio since 2014.  In March 2017, Cape May made a DDH version available in Firkin using Citra and Amarillo hops.  In March 2018, as part of their "One Off Wednesday" and Take Takeover at Cloverleaf Tavern in Caldwell, NJ, a DDH version with Mosaic and Amarillo hops was available. As we announced in June, Cape May recently released a DDH Coastal Evacuation in limited release cans. 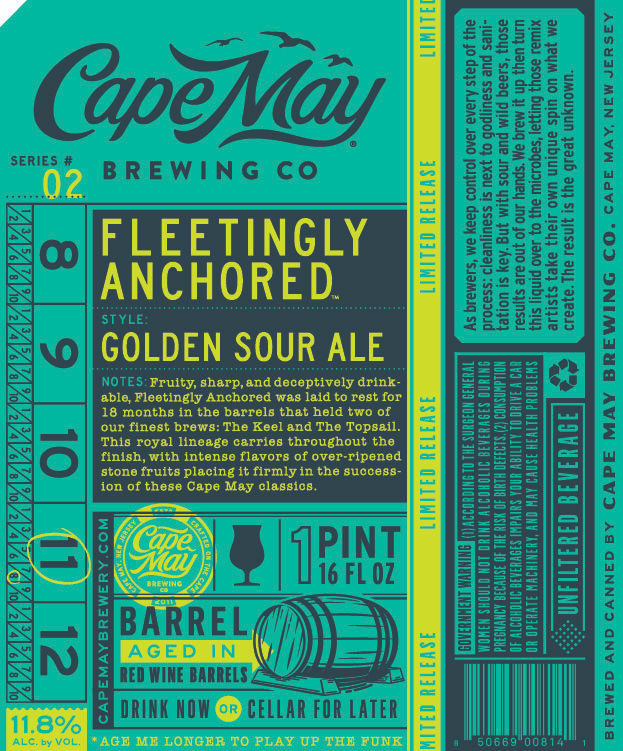 Also being introduced by Cape May is a completely new beer - Fleetingly Anchored. According to label art, Fleetingly Anchored is a Limited Release 11.8% ABV Golden Sour Ale Barrel Aged in Red Wine Barrels.  The profile on the label reads:

Fruity, sharp, and deceptively drinkable, Fleetingly Anchored was laid to rest for 18 months in the barrels that held two of our finest brews: The Keel and The Topsail. This royal lineage carries throughout the finish, with intense flavors of over-ripened stone fruits placing it firmly in the succession of these Cape May classics.

Additionally, the label art appears to include a message from the brewers:

As brewers, we keep control over every step of the process: cleanliness is next to godliness and sanitation is key. But with sour and wild beers, those results are out of our hands. We brew it up then turn this liquid over to the microbes, letting those remix artists take their own unique spin on what we create. The result is the great unknown.

Our requests for additional information have not yet been returned by Cape May.